The 2013 Hot Docs Festival is finally here. Toronto's second-largest film event (behind TIFF), Hoc Docs runs for 11 days and contains a whopping 205 movies to choose from. If my math is correct, it's impossible to see them all, so we've put together this here post to help narrow down your schedule with some confidence that you'll be seeing the best films on offer.

On Monday we outlined the 10 films getting the biggest advance-buzz; these were recommendations dependent on the notoriety of their filmmakers, the intrigue of their subjects, and the hoopla they created at festivals like Sundance, Rotterdam, and SXSW. Now that we've had a chance to take a look at many of those titles (plus quite a few others), we're here to report on the docs we saw that, hyped or not, are among the very highest quality in the festival, and should not be missed.

I've got to be honest: twenty minutes into this film I was ready to bail on it. A film by Shawney Cohen (he did some effects work for Cronenberg and Egoyan), it's all very banal in a uniquely Ontarian kind of way, lacking any sort of intrigue even as it fixates on a family-run strip club in Guelph. Worse, Cohen contributes one of the hammiest voice-over tracks in the history of Canadian filmmaking. But then we meet his mother, and Cohen finally stops yapping.

The adage "If you want something done right you have to do it yourself" is taken to task in this full, emotionally brutal assault on the idea of family. Cohen's gifts as a filmmaker are extremely limited, but he is perfectly suited for observing those closest to him without coming off as exploitative or intrusive, refusing to dilute the nature of their pathologies as they stumble toward a clear yet painfully unacknowledged vanishing point. Watching this film is a harrowing and devastating experience, though I still can't tell if I wish it'd been directed by someone other than Shawney. 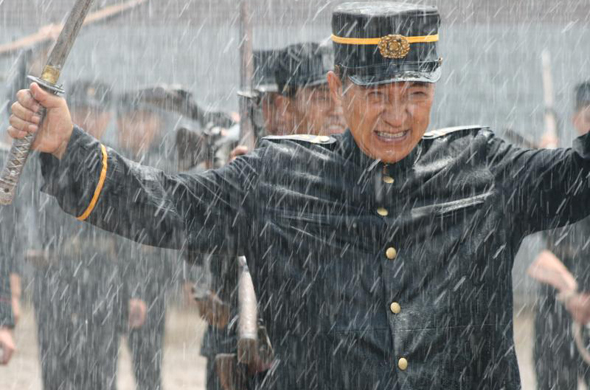 Probably helped by the recent onslaught of Kim Jong-un's nuclear threats, it's difficult to imagine a more important film in the festival this year, nor a more chilling one. This doc takes a look at North Korea's "film industry," the scare quotes an intent to ward off any misconception that this might resemble any other nation's model for movie-making. Perhaps unsurprisingly, this is less a film about how North Koreans put a film together (has anyone actually ever seen a North Korean film? I haven't...), and more a study on the claustrophobia induced by having your creativity placed under the complete control of someone else.

It isn't difficult to see the broad parallels when a director shouts to his actors, "I want to see resentment of the Japanese in your faces!" nor when certain innocuous shots of the national film museum are ordered to be filmed in the most uniform, precise way possible. Every piece of footage in this documentary was reviewed by North Korean officials before allowed out of the country, saying much about the degree of their oppression, as well as - considering the absurdity of the material - the delusions surrounding their own image.

Rare is the portrait of slums and homeless children as un-pornographic as in These Birds Walk, a remarkable and energetic odyssey through childhood that is equal parts Peter Pan and The 400 Blows. While the subject is bleak and upsetting - the film looks at a kind of shelter/foster home for children who either run away from home or aren't wanted by their parents anymore - the interest primarily lies in the way these kids behave with one another and engage with their own egos. With a roving camera that exhaustively tracks the whirling capsules of energy, it's a film that captures the experience of being young and alive, regardless of the circumstances.

Not many films have been made about Michigan's snowmobile racing culture - I dunno, maybe a lack of demand - but even if there were an entire genre devoted to nothing but such films, it's hard to imagine there being one better than this. By turns a thrilling sports film, an ethnographic portrait of Mid-West ruralites, and an essay on bodies and human ambition, Nick Bentgen's film would feel like a breakthrough even if one were only looking at its veiled observations of gender roles, with the women seemingly cast aside as workman's assistants and cheerleaders, until they aren't. The final shot, showing a basic workout routine, is a stunning image in its own right, and is as pointed and in-your-face as any closing statement I've seen all year, if only for the audacity of ending this film on that note.

TPB - AFK: THE PIRATE BAY AWAY FROM KEYBOARD

If you only see one documentary about the legal battles of a notorious piracy giant at this year's festival, make it this one. Tracking the case against the four creators and founders of The Pirate Bay, director Simon Klose is careful to make sure his film isn't just a recap of news headlines we've already read to death over the last few years. Instead, this is a carefully organized character study that illustrates Culture's inability to digest and allow change, damning new ideas to the margins and the underground. As a triptych, TPB - AFK, Downloaded, and Pussy Riot: A Punk Prayer collectively form the year's most convincing case for why conservatism benefits no one.