Last week, anticipating the release of Igor Drljaca's debut film Krivina (which had its world premiere at TIFF last September), The Royal put together a programme of five of his award-winning shorts. Hopefully some of you went out and saw them; even if you didn't, though, this will be worth your time. A born Sarajevan, Drljaca moved to Canada in 1993 because of the war. In the most obvious sense, then, Krivina - a fictional narrative about a Bosnian immigrant named Miro (Goran Slavkovic) who returns home after hearing that an old friend has been accused of war crimes - would appear to be largely autobiographical. Minimal and compact, Krivina is a creeping and haunting film.

Quite the departure for Eric Khoo (no masochistic sword tricks in this one!), to the point where it seemed irrelevant to even mention him until I learned that he has roots as a comic artist. Based on the manga memoir A Drifting Life, and five earlier short stories by the Japanese manga artist Yoshihiro Tatsumi (a huge inspiration for Khoo's creative urges), Tatsumi is a biopic about the eponymous gekiga pioneer. The 'bio' part often takes a backseat, though, overshadowed by the more interesting recreations of some of Tatsumi's most iconic stories. "Recreations" is the correct word, too, since, Tatsumi bizarrely wasn't involved in the animation at all. With that fact in mind, it's hard to not feel it'd be more worthwhile to just read the memoir and original comics instead. 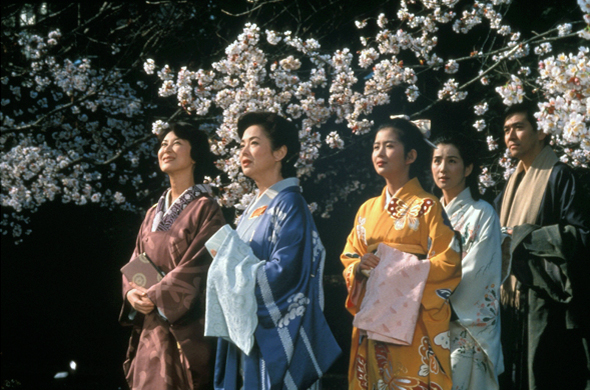 As we mentioned last week in our post about TIFF's mega Japanese Winter Extravaganza, 'Japanese Divas' is "an incredible 30-film series that pays tribute to the leading ladies of Japanese cinema, including Setsuko Hara, Kinuyo Tanaka, Machiko Kyo, Isuzu Yamada and Hideko Takamine." While the key inspiration was the iconic actresses themselves, the series might as well have been called 'Pretty Much the Thirty Best Japanese Films Period,' given how so many of Ozu's, Naruse's, Teshigahara's, and Mizoguchi's masterpieces of all masterpieces are being shown. I'd try to tell you what's most essential here, but my selection process would probably have to resort to pulling titles out of a hat. Any night you have free in which one of these films is playing should be free no longer.

If you've only ever seen this Kiarostami masterpiece (and really, aren't they all?) on DVD, you haven't actually seen it. The influential film critic Adrian Martin makes the case: "...There is a monumentality, not just a minimalism, to his work. It is for the same reason that we must always see the films of Tsai Ming-liang (as Jonathan Rosenbaum has pointed out) and Hou Hsiao-hsien on a big screen. The earth just does not 'exist' in Kiarostami, it trembles. It is that vibration...married to the stillness of the shot or the steady, gliding car movements, to the duration of the images and their rhythm, to the unstable exchanges between inward feeling and outward pose in his actors, which creates the monumental effect of cinema in Kiarostami." Also, one of the most transcendent movie endings ever. Also, it's free and on 35mm.

If you've ever had to suffer (relatively speaking) through the 1942 sound version of this classic, right all the wrongs you inflicted on yourself then by seeing the silent version; the way it was created to be seen, on a beautiful, rustic 16mm film print. And don't let the Comedy genre tag fool you: sandwiched in cinematic history between two other brooding gold rush masterpieces (Erich von Stroheim's Greed and Lev Kuleshov's By the Law), this has all of Chaplin's hallmark poetry, pathos, and tenderness, foreshadowing his heartbreaker City Lights, not to mention his downright dark late period.

A two-part celebration of our favourite Winnipegger filmmakers, this screening consists of first a shorts programme curated by Clint Enns & Leslie Supnet (which includes some of their own work as well as a film by Guy Maddin), and then a screening of Greg Hanec's 1985 feature Downtime ("An offbeat portrait of two young adults, a janitor, and a cashier at a small store struggling to communicate"). Despite Hanec having made Downtime without having seen Jim Jarmusch's first two features, Permanent Vacation and Stranger Than Paradise, these have still become default points of comparison. At least he's in good company.