Especially since the last several Oliver Stone pictures have ceased being interesting the moment the words Oliver and Stone appear on screen, Savages just might be the year's most pleasant surprise. Many are calling this a "return to form," which I'm guessing means "this was kind of like Natural Born Killers and I liked that movie," but to be honest this feels like new territory for Stone. The film is nasty, devious, and has Salma Hayek playing the part of some I-don't-know-what, but best of all is its shameless indulgence. These guys are having a hell of a time, and it clicks with the audience, too. The only downside - not that it will surprise anyone considering the source - is that it's too damn long.

To Rome with Love (Varsity)

Approaching 80, is Woody Allen embarking on this semi-recent Tour d'Europe as a kind of funded retirement trip? Aside from his brilliant and hysterical Vicky Cristina Barcelona, this string of name-dropping Euro films have presented the same tired writing from Mr. Allen as his 90s work, though they're often given a pass because of their 'exotic' settings. This one seemed promising as it shuffled through one bizarre title after another (Nero Fiddled, Bop Decameron, and The Wrong Picture), but then took a turn for the worse when the current, sappy name was solidified. I know, it's only a title, but he picked it, and the airy and touristic vibe from the postcard-esque To Rome with Love is equally apparent in the film itself. Which is to say, this isn't a return to form, either. 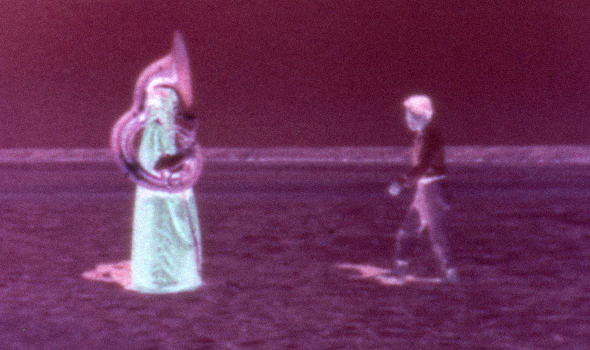 (Wednesday, July 11 at 6:30PM; TIFF Bell Lightbox)
Chick Strand, who helped found Canyon Cinema in San Francisco in the early sixties, was a highly influential and talented filmmaker who straddled documentary and avant-garde tendencies. She created some of the most luscious and empathetic ethnographic films ever made, and her recent death at the age of 77 has brought back some much deserved attention to her filmography, which - compared to Canyon co-founder Bruce Baillie - is unfairly overlooked. Her Anselmo trilogy is a great entry point for the uninitiated, as it spans three decades of her practice (1967, 1976, and 1986), and is a bit lighter on the experimentation than some of her contemporaries (though - see above - there is definitely some of that here). As one of the only representations of the avant-garde in TIFF's First Peoples' Cinema retrospective, it's also one of the most distinctive and important of the entire series.

Playing as part of a double feature with Detention, Toronto After Dark complete their quartet of Summer Screenings with the Canadian premiere for one of the most hotly anticipated films from Sundance last January. V/H/S is an omnibus horror film from genre heavyhitters like Adam Wingard, Ti West, and Joe Swanberg. The unifying conceit for the segments is, disparagingly, that it's all found footage, which can we move on from that soon please thank you. It's generated a lot of buzz in its festival run, though - like every omnibus film - it has its high and low points (relative newcomer David Bruckner is said to have made the most terrifying bit, called "Amateur Night," so watch out for that one). Those who anxiously await the annual mid-to-late October genre festival should jump for this early fix.

Toronto Animation Arts Festival International (July 6-8; TIFF Bell Lightbox)
Will Toronto finally have a legit animation festival? Nothing against the Toronto Student Animation festival, but we've been sorely lacking in a platform for professional animation, paling in comparison to e.g. Ottawa, whose international festival celebrated its 35th birthday a couple of years ago. TAAFI looks to have set the foundation for something great and hopefully long-lasting. From a two-hour programme of Kaj Pindal shorts and a screening of the rare and vintage Rock & Rule, to handfuls of great new shorts (including one for student work) plus plenty of panels and workshops, these guys are making the most of their three day schedule. You can purchase tickets and passes online here.

North Korean Human Rights Film Festival (July 6-8; Innis Town Hall)
Not only is this the first film festival in Toronto to ever focus on the human rights of North Koreans, it's the first anywhere in North America, which is insane. The dire scenario in North Korea is increasingly well-documented, peaking several months ago with the death of Kim Jong-il. Naturally, none of the seven features in the three-day festival (unfortunately the same three days as TAAFI) are North Korean productions; rather, it's an eclectic slate from the likes of Japan, Canada, the Netherlands, Norway, and South Korea, all focusing on the plight of life in this country. Many of the films will have guest speakers on hand for Q&As, including Min Sook Lee's much-lauded Canadian film Tiger Spirit, which Lee will present in person. All screenings will take place at Innis Town Hall; visit their website to purchase tickets.