This Week in Film: Beasts of the Southern Wild, Shut Up and Play the Hits, Ashes and Diamonds, The Free Screen, Shinsedai, Greek Retrospective, DVD & BluRay

First Sundance, then Cannes, now the world. Beast of the Southern Wild is, by now, clearly 2012's indie darling that could - a debut film with a certain audacity that's wholly uncharacteristic of movies by first-time filmmakers. Making sure to keep one eye on the humanist struggles of people in New Orleans following Hurricane Katrina, it's like a 50/50 fusion of Where the Wild Things Are and When the Levees Broke. A bold statement that rightly has people talking, it's dividing filmgoers just as it calls for unity. Understandably imperfect, and at once childish and childlike, it's a strange film indeed.

Shut Up and Play the Hits [opens Wednesday, July 18]

More or less, this is the 'cool kids' version of Justin Bieber: Never Say Never, which is to say: if you couldn't make it out to the big show, now is your chance to see what you missed (or relive it, in case you were there). Documenting LCD Soundsystem's final show ever, it adequately serves its purpose of replicating the concert, so long as you see it on the largest screen with the loudest sound possible (Hot Docs' screenings of the film last Spring made sure to crank it up to 11). Does it do service to the conundrum of what drove James Murphy to call it quits so early in his career? Does it bring anything valuable to those who don't care for this band's music? No and no. Pick up any of the band's three studio albums and take a listen; how you feel during this activity will dictate whether or not this is a film for you.

Breaking from away for a moment from their typical selection of avant-garde shorts and the occasional feature, this month's Early Monthly Segments will showcase a classic of world cinema: Andrzej Wajda's Ashes and Diamonds. It's not a complete break from form; three years ago, EMS showcased Vera Chytilová's delirious Daisies alongside Len Lye's stone-cold, scratched leader masterpiece, Free Radicals. "With its stunning deep-focus shots and rich black and white photography, Ashes and Diamonds is a standout of Polish filmmaking... Cybulski's acting style and off-screen personality earned him the nickname 'The Polish James Dean' (cemented unfortunately by an early death) and his role as Maciek finds him rising to the occasion--stealing the show with bomber jacket, sunglasses and non-conformist languor." $5 donations at the door. 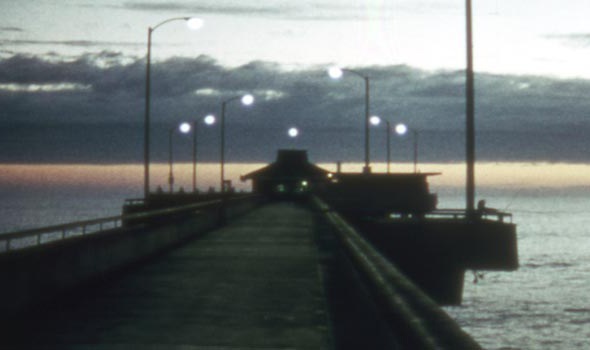 Exploring "cinema's ability to fracture and re-stitch time," there are at least two films I can personally vouch for as being worth the price of admission alone (OK, it's The Free Screen, but this statement would still apply if there were actually a price of admission). Those would be Rose Lowder's Couleurs mécaniques and Gary Beydler's Venice Pier (I might as well also include, sight unseen, Beydler's other film in the programme, Pasadena Freeway Stills, on the strength of Venice Pier). The imagery in Couleurs mécaniques is much more abstract than her efflorescent 'Bouquet' series, which was one of the absolute highlights at TIFF's Wavelengths sidebar last year. Venice Pier, meanwhile, takes an epic trip down an LA pier that elongates the 16-minute track forward into a collage spanning who-knows-how-many nights and days.

Shinsedai Cinema Festival (July 12-15; The Revue)
This weekend the 4th annual Shinsedai festival once again brings Toronto audiences an alternative look into Japanese cinema at the Revue. Kore-eda, Ozu, and Mizoguchi could not be further from the styles on display in these quirky comedies, experimental shorts, docs, and dramas (not to mention the first 'pink films' to ever play Toronto). Battle girls, bondage, anime, and the cosmos are what this legion of new Japanese filmmakers are all about, and it should continue in this vein as some of the most fun you can have at a film festival. Tickets are on sale now; individual events are $12 a ticket ($10 for students and seniors), with discounts on select pass options. See the website for further details.

Toronto Greek Film Retrospective (July 12-14; The Danforth Music Hall)
The theme for this year's retrospective, which is the festival's sophomore event, is 'Days of Heaven and Hades.' No, there aren't any Terrence Malick films, but there are a couple of classics by Jules Dassin and Michael Cacoyannis. The seven-film programme will appropriately unspool in the heart of Greek Town at the Danforth Music Hall on DVD, Beta, and other Digital transfers. It's a compelling and enlightening mix of contemporary and canonical films from a national cinema - and nation - that's having a pretty rough time these days (i.e. Theo Angelopoulos and the economy, respectively). It's also - fittingly - entirely free.

Film still from Beasts of the Southern Wild