Whit Stillman is one of the greatest American screenwriters ever to get a film made, and he is absolutely the best alive right now if we're exclusively judging on the strength of dialogue alone. His body of work solely consists of gust-busting comedies about dĂŠbutant(e)s and yuppies swapping witty remarks and providing snooty intellectual quips about something or other, and Damsels in Distress is a glorious continuation of that style. Not remotely based on Wodehouse's 1919 novel nor George Stevens' 1937 film, Stillman sets his film at an east coast college and focuses on three female students who start a suicide prevention club to counteract the campus' recent surge in depression and self-offings. If that doesn't get you in the door, it may or may not help to know that this is, in small part, a musical.

"[Influential Canadian painter Tom] Thomson went missing in Ontario's Algonquin Park on July 8, 1917, his body discovered eight days later floating face down in Canoe Lake; the exact cause of death has never been determined." It's an intriguing premise, but only a part of the web that filmmakers Michele Hozer and Peter Raymont explore with an all-over technique in their retrospective doc. The Group of Seven exist in large part because of this man (and rightly so, what with Thomson's mastery trumping the septet's work in terms of sheer, unconventional beauty), yet he can get marginalized and overlooked by non-Canadians for not being an 'official' member of the collective. Hopefully West Wind will serve as a sort of revision of Canada's painting landscape for the international masses.

Over the last few years, we've been getting closer and closer to Hollywood realizing our dream of watching a feature length 'cute animal' YouTube video on the big screen, and Chimpanzee might have just delivered us to the promised land. Tim Allen may be enough to deny us that holy grail for the time being, but this can only be seen as a move toward complete zoological observation, and away from the narrative-minded extraneity found in recent primate porn like the compelling Project Nim. Don't even get me started on Frederick Wiseman's Primate, one of the great anthropological condemnations in cinema history. 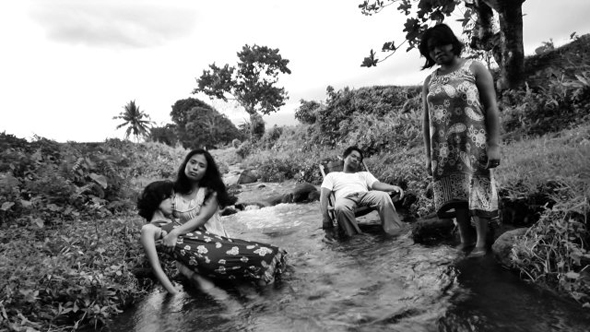 There are probably only about four people who will read this who have ever seen a Lav Diaz film. Part of this is because they rarely screen (though Toronto programmers tend to make a point to show each of his films at least one), but then, even when they are screened, most people just don't have five, eight, or eleven hours to devote to a single movie. Coming in on the short end of the scale (six hours) is his newest film, Florentina Hubaldo, CTE, screening on the last day of the Images Festival.

Those who caught Diaz's six-hour Century of Birthing at TIFF last September and remember the 'clips' from the film that the filmmaker character was working on will recognize Florentina as the project you were getting a preview of. Overflowing in philosophy, mental illnesses, and political turmoil, this is by all accounts a run-of-the-mill Lac Diaz picture; which is to say, probably transcendent and brilliant. Screening will be at AGO's Jackman Hall.

Early Monthly Segments: Sally Potter + Patricia Gruben (Monday, April 23 at 8PM)
While only running a medium-length 34 minutes and decidedly missing any trace of Michael Jackson and zombies, Sally Potter's (Orlando) international hit Thriller is a variation on Puccini's La BohĂ¨me, and often labeled 'a feminist manifesto.' Just as much, Potter is playing off of and critiquing Hollywood genre-filmmaking (not hard to guess which genre) and the stereotypical portrayal of women in these films. Borrowing the score from Hitchcock's Psycho, Potter creates here a new kind of thriller; one as scathing as it is formally experimental. The folks at EMS are pairing Potter's film with Patricia Gruben's 9-minute short Before it Blows. Another kind of Hollywood critique - albeit one aimed more towards audiences than filmmakers - this film calibrates our anticipation as we stare at a geyser, waiting impatiently for its eruptions. As usual, this event will take place in the Gladstone Art Bar with a $5 suggested donation at the door.