The top 10 Toronto documentaries of 2010

The top 10 Toronto documentaries of 2010 wasn't an easy one to put together, I tell ya. Experts were consulted (Hot Docs, NFB, a DOC discussion group), the stellar list of titles had to be tracked down, and then a somewhat biased judging panel consisting myself and a few blogTO writers and editors weighed in. Here are the best 2010 documentaries that tell a story about Toronto or Torontonians.

Rush: Beyond The Lighted Stage
Like Rush? Me neither. But Beyond The Lighted Stage is not just a fan movie. Local metal doc gurus Scot McFadyen and Sam Dunn (Metal: A Headbanger's Journey, Global Metal) make the case that despite years of being trashed by critics and not being very cool, Rush are huge, worshiped internationally, and deserve our respect. Billy Corgan, Kirk Hammett, Jack Black, and Trent Reznor talk at length about their love for the band and have pretty much convinced me to check out Rush's 1970s concept album, 2112. Rush: Beyond the Lighted Stage picked up the Audience Award at the Tribeca Film Festival and had opening night spot at this year's Hot Docs Festival.

TO in 24
There will never be a more fitting film for this list than TO in 24. Local filmmaker Dale Hildebrand organized 24 cinematographers to shoot for 24 hours, in hundreds of spots all over town. The result is a 47-minute portrait of Toronto - am to pm, birth to death, with street and aerial views - an exploration of the cultural pulse of the city in a series of elegant and often wide-angled shots. TO in 24 didn't get around a whole lot locally (one public screening was hosted by then-Mayor David Miller and Bruce McDonald), but a short version of the film made it into the hands of world leaders and international media at the G20 Summit. [Update: you'll be able to see it on OMNI in a few languages shortly.]

A Different Path
The Toronto segment is the bulk and the better part of this documentary about a bunch creative anti-car activists. It features the Communist's Daughter's famous trumpeting bartender, Michael Louis Johnson, talking about the Streets are for People! movement and its various taking-back-the-street parties and parades.

Out My Window (Highrise)
Katerina Cizek's Out My Window, the newest chapter in the NFB's increasingly ambitious and ongoing HIGHRISE multimedia project about human experience in the global vertical suburbs. Credited as one of the world's first interactive 360ยบ documentaries, the project uses high-end web technologies and innovative photography to create a virtual high-rise dwelling, with each floor corresponding to one of thirteen different global cities...The result is a fascinating interactive mosaic made up of fragmented and non-linear stories that challenge traditional perceptions of the urban experience. Perhaps most admirable is Cizek's ability to deftly address themes of migration, poverty, and environmentalism without ever losing sight of the lived experience of her film's subjects. (JP)

In the Wake of the Flood
Ron Mann and Margaret Atwood. Need I say more? Truthfully, the footage of Atwood's environmental themed The Year of the Flood book tour isn't hugely compelling, but Atwood certainly is. Scenes shot in Atwood's home and on the road give us a short and sweet glimpse into the acclaimed author's life and concerns. 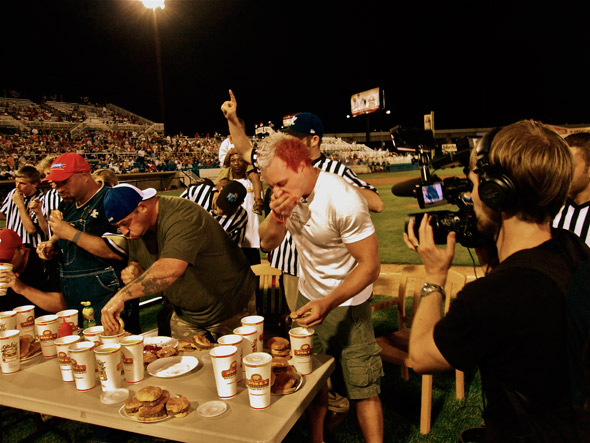 The Story of Furious Pete
This is a fun doc that tells the tale of Pete Czerwinski, a Toronto-area competitive eating champion. While the backdrop of the story is that Czerwinski once was anorexic, this isn't really an overcoming the odds type of film. Instead, it's just an inside look at one guy's special skill and how it takes him to eating challenges across the US and to local fundraising events where crowds guess how long it's going to take him to eat a tray full of ribs. Make sure to stay until the very end to witness Furious Pete attempt to eat the 72 ounce steak at Lonestar. (Tim)

Mark
Mike Hoolboom's film Mark will make you cry. Hoolboom has crafted a touching montage of home movies, interviews with friends, and stock footage to pay tribute to his late friend and editor, Mark Karbusicky.

Look At What The Light Did Now
One of my favourite Christmas presents this year came from the Toronto indie record label Arts & Crafts. They just released the Feist doc Look At What The Light Did Now and it's pretty awesome. The DVD includes a bunch of live performances, videos, interviews with Feist, Broken Social Scenesters, Chilly Gonzales, and other people involved in the making and touring of her album, The Reminder. An interesting angle covered in the film is the collaborative - and very conscious - process of shaping Feist's image throughout these breakout years.

Dish: Women, Waitressing & the Art of Service
The dish gets served in this doc, as waitress-turned-director Maya Gallus interviews women in the business of bringing food to people in Toronto, Montreal, Paris, and Tokyo. One common thread emerges whether they do their job naked, in tuxedos, or in maid uniforms - working in the service industry can definitely suck.

In The Name Of The Family, Shelley Saywell's important documentary about the honour killing of a 16 year old girl in Mississauga.

The Big Wait, by Jari Osborne and Joanne Jackson examines the cumbersome process foreign-trained physicians go through to become licensed doctors in Canada, while there is a shortage of family doctors.

For more Toronto-centric docs worth checking out, here's our Top 10 Toronto Documentaries of 2009.

With contributions from Tim Shore and JP Larocque.