Rebirth of a Nation pits technical brilliance against cultural atrocity

Last night, the TIFF Bell Lightbox screened DJ Spooky's Rebirth of a Nation as part of their ongoing Essential Cinema series. The film is Paul D. Miller's reediting and recontextualization of D.W. Griffith's 1915 epic, Birth of a Nation, which is set during the American Civil War and subsequent Reconstruction era and tells the story of the rise of the first Ku Klux Klan.

The movie is interesting in that it is a cultural artifact that is both revered and reviled in equal parts. On the one hand, the film's director and crew helped pioneer camera techniques such as deep focus, jump-cut, cross-cut and facial close-ups -- techniques, which, to this day, still inform the visual language of cinema. But, on the other hand, the movie is deeply problematic in how it promotes white supremacy and portrays the "knights" of the Klan as heroes.

In his appropriation of Birth of a Nation, Miller attempts to apply deejaying techniques such as mixing, sampling, and looping to create counter-narratives within the film. And, the live score that accompanied the film was fantastic. Most of the compositions for the soundtrack consisted of a Blues progression played with a Violin and Cello, underneath which Miller would lay down hip-hop beats. The effect was similar to what Johnny Greenwood did with the There Will Be Blood soundtrack -- the music was definitely anachronistic, but it was a very effective accompaniment to the visuals. Special mention should also be made of the Canadian string quartet who joined Miller, I Furiosi -- they were excellent throughout the performance. 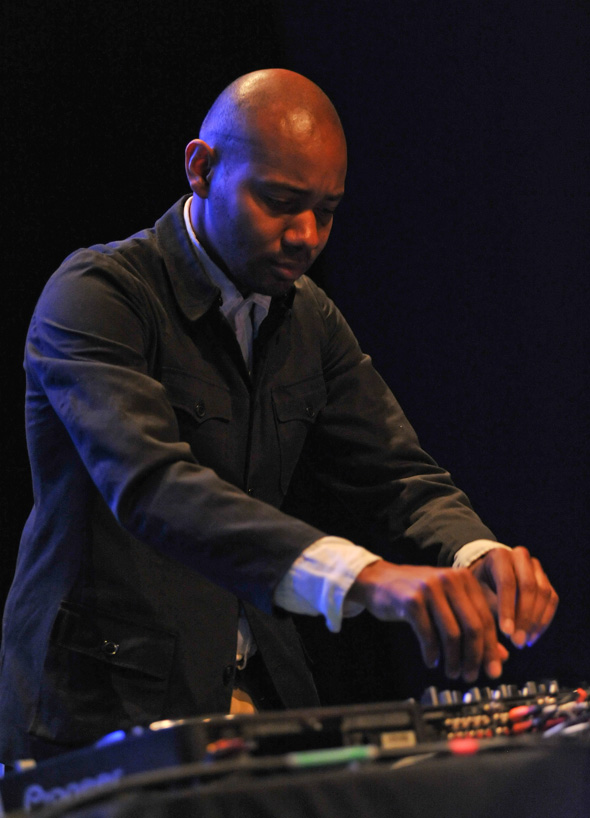 At an hour and fifteen minutes in length, the new version is much more watchable than the original's more than three hour running time. Moreover, the film quality is excellent -- Miller had a high-definition transfer done of D.W. Griffith's original film reels, so this is likely the best the movie is going to look.

Watching the film unfold was, however, a troubling experience for me. I found myself in the paradoxical position of knowing that everything the Klan stood for was wrong, but by the end I was "cheering" -- for lack of a better term -- for Ben Cameron, the protagonist and founder of the Klan, who attempts to save his beloved from the vilely portrayed mulatto antagonist Silas Lynch. Upon the conclusion of the narrative, I was unsettled by what had ran through my mind, and I quickly came to realize that despite my supposed contemporary position of "racial enlightenment," it remains uncomfortably easy to be temporarily seduced by the kind of racial rhetoric and mythologizing that still takes place altogether too often.

Miller said that he was inspired by the words of the philosopher Santayana who said that "those who do not understand the past are doomed to repeat it." And, wary of the cruel power of what I had just witnessed, those words resonated with me as I thought about how a film from 1915 could almost enroll me in its racist project. I suspect, however, that it's precisely this awareness that Miller's project works to foster. Coming out of the experience, I knew that I had to be even more vigilant and critical with such narratives, lest I too fall prey to the mistakes of the past.

Words by Igor Bonifacic. Photos courtesy of Sonia Recchia and WireImage for TIFF.