Does Telefilm wield too much power?

Earlier this week, Telefilm announced Denis Villeneuve's Incendies has surpassed the 1 million dollar mark at the box office, a huge feat for a Canadian film. I'm paying attention to this film because last week Telefilm also announced that Incendies is the Canadian film that they are putting forth to be considered for Best Foreign Film at the Oscars.

When I read that, I thought about Telefilm in a way I hadn't before. Yes, I knew they were the largest government funding agency of Canadian film. I knew that all of us, from actors to crew, to producers and directors were essentially dependent on them to eat, let alone make films. What I didn't know, was just how far-reaching their influence was. They really do touch every part of Canadian film, from development and funding, to apparently, even the Oscars.

They are the puppet masters, hidden high above the general public of the Canadian film industry. It is near impossible to make a film in this country without their support.

Isn't it interesting, that most Canadians wouldn't even be able to tell you what Telefilm is and does, when arguably, it's the most important part of Canadian film? Without them, and their 250 million dollar budget, we'd have no money, and without money, there would be no films.

To get a better sense of Telefilm, I talked to Senior VP of the Toronto offices, Dan Lyon, who started working at Telefilm five years ago. I first met Dan at an Oscar party for Away from Her in Los Angeles, I was taken by his good sense of humor and a kind laugh. For a man with so much power, he is remarkably easy to talk to. He is also a great dancer, which I witnessed that night. How would he describe Telefilm to the average Torontonian with no awareness of how the Canadian film industry is structured? 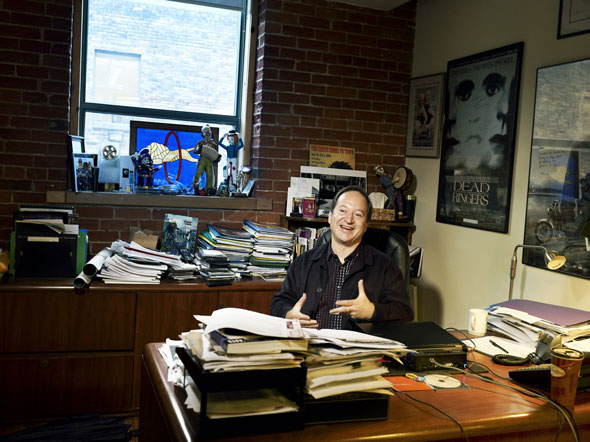 "Telefilm is a Canadian cultural agency that is an indirect arm of the government of Canada, which is charged with supporting and developing the audio visual industry, mostly in terms of motion pictures. It also administers the Canada media fund, which is a fund that is supported by the cable companies of Canada as well as the government, which this year, was over 250 million dollars. In terms of feature film, we are involved in developing, production, marketing, and in building the industry and building awareness for Canadian film. Telefilm both markets within Canadian festivals and festivals around the world so films will be seen worldwide," he says.

That's a lot and the job isn't easy, but Telefilm is doing a lot right. Canadian films have made a splash in the last five years, from Sarah Polley's Oscar-winning Away From Her to the polar opposite Y.P.F which all my friends not in the industry went to go see, for both its title and modern take on sex. A lot of people I spoke to said that Canadian films at this year's festival were the best in history. So are we, in fact, moving in the right direction?

"There were always anomalies, films that broke out through the noise. Part of recent successes, is the maturity of the industry. But what has really changed in the past five years is that Telefilm realized that marketing is an essential component of what they needed to achieve. I came out of 17 years as a distributor. This increased the chances that are our movies will actually be seen. We don't produce the films, we don't write them, we don't perform in them, but I see our role as being shepherds. My mental image when I'm really thinking about the number of projects we're involved in is a funnel. We start with the wide end of the funnel, with early-stage development, as we get into later stage, the funnel narrows, with better projects. Then moving towards packaging which is the final stage of development, and then finally, production, which I'd like to think is the creme-de-la-creme of the available projects."

To be working on what Telefilm thinks is the best, means that some projects fall to the wayside, which can, I'm sure, get awkward. The Canadian film industry is small, at a certain point, everyone knows everyone. Dan and the other people who work at Telefilm are human. So how do they say no to a friend?

"My definition of a good day is a day that I help someone make their dreams come true. My definition of a bad day is when I have to burst someone's bubble. Money, is by definition, limited. We have to say no more than yes. Wayne Clarkson, the former CEO warned me when I took this job that I wouldn't be making any friends. I'm happy to say that as it turns out, he was wrong, and in fact, I've made many friends on the job because it has opened me up to a whole new generation of the film business that I'm happy to call friends. I have to separate the personal connection from the professional. It does hurt a person when they're told no, or not now, you're not ready. I think people come to the realization that there was a good reason for it, that something was not fully formed. Sadly, Telefilm doesn't have unlimited money and that we have to make choices."

And in their choices lie our future as Canadian artists in a developing, important, and often struggling Canadian industry. How do you make English Canadians see English Canadian films, when there's so much competition from the States, and they frankly, might not be interested?

"Things are moving in the right direction. The next challenge is to take very seriously the mandate of building the audience. Often a film receives artistic accolades and festival accolades and then for whatever reason,IT doesn't quite resonate with the public. We really want to shift the balance so that more of the films on the English Canadian feature side resonate with the public. We'll see what happens."

It's true, time will tell. If recent events are any indication, I do think it's fair to say that things are looking up. Who knows? We could have an Oscar in no time.