What it was like at my TIFF debut, my first red carpet and watching my (thankfully well edited) nude scene

"Mom, is my hair crazy?" Clearly, the night Daydream Nation premiered, I had my priorities straight.

Walking the red carpet was nerve wracking. Right before I made my way down the press line, I saw Landon Liboiron and Jesse Reid, two wonderful guys who are also in the movie. I hadn't seen them since we finished filming in February in Vancouver. Posing in front of forty strangers with cameras is less weird with two irreverent and hysterical young men.

"I never have any idea what to do here," Landon whispered, then shrugged. Neither do I. I always want to do a crazy Jack Nicholson smile or jazz-hands. I promise myself that tonight I will restrain myself. Thankfully, I don't trip or say anything inappropriate during several interviews.

Once we're in the theatre, I relax. I was so excited that I was going to see the film with an audience, able to experience their genuine reaction. It's rare to not see a movie you're in before it debuts, but that's how it worked out with Daydream Nation.

My brother, Michael, was my date, sitting next to me in the theatre. He sees Kat Dennings, the film's star, sitting a few rows down from us. "Kat Dennings is gorgeous. Introduce me." I promise to do my best.

When the lights dimmed and the movie started, he took my hand. "Relax. It's going to be great." And it was. I rarely say this about anything I'm in, but Daydream Nation is a good movie. People laughed at the right times, cried at others, and since I'm not the lead, I felt like I was also able to watch it as an audience member. I found myself getting lost in the film, touched by its dreamlike qualities and fantastic soundtrack. 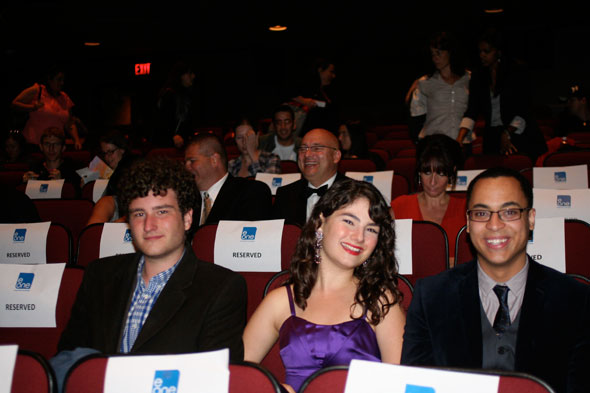 When the movie finished, I felt moved that I was a part of something so beautiful. I felt overwhelmingly proud of the film's director and writer, Mike Goldbach. At the Q + A he was eloquent and funny, and knowing how hard he has worked on this movie from the time he wrote the script six years ago until now, I couldn't be happier for him.

Personally, I'm relieved that my nude scene is short, darkly lit, and you only see my boobs for a split second. I promise Mike a drink for being so tasteful.

The after party is fun but crowded, held at Lobby. After laughing with Kat while we apply make-up by candle light, I congratulate Mike and decide it's time to go to another after party for the Canadian film A Night For Dying Tigers. It's at the Windsor Arms so it's just a short walk away.

I see a lot of old friends there, including Gil Bellows, the film's star, who just won five Emmy's for the HBO film Temple Grandin starring Claire Danes. He played my Dad on a tv show called Terminal City. The party is the best I've been to yet. My friend Sarah Power and I dance shoeless to old soul music and Wu-Tang. We're finally forced out when the DJ turns the lights on.