Would you shell out twelve bucks to see Loaded Goat, a film about a small town that's faced with destruction when a local goat swallows a load of dynamite? How about Comrade Lenin, in which the legendary Soviet leader rises from the grave to reconcile two lovers he meets in a Moscow brothel?

Those were just two of the 32 unmade movies that were pitched last night at the Raindance Film Festival's Live! Ammunition! competition. Given rare access to a panel of Canadian film executives, aspiring filmmakers had just two minutes each to prove their idea was worth turning into a movie, with $2000 worth of script development services and training up for grabs. 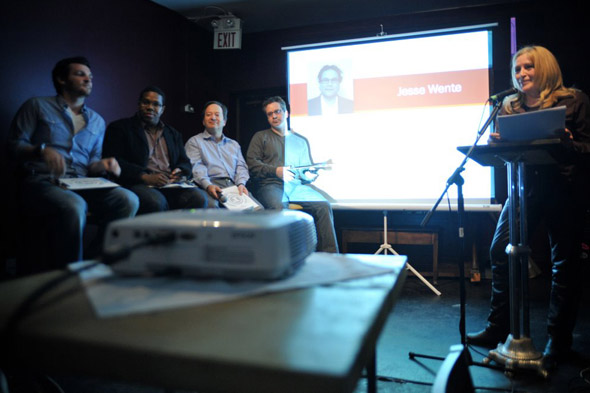 For two and a half hours, Toronto's Tarantinos-in-training braved a capacity crowd at Czehoski's and pitched their hearts out to a panel made up of Telefilm Canada's Dan Lyon, Nicholas Tabarrok of Boutique Films, Strident Films founder Marc Rigaux, and Bowling For Columbine production executive Floyd Kane.

Some participants had produced films before, but most were amateurs - people who believed they were sitting on a story so compelling that all they had to do for it to take off was to say it out loud to a room full of people.

The back room of Queen Street bar may be an unlikely place to find the next Spielberg, but what do you think the reaction was when some one pitched Hot Tub Time Machine to the boys in the board room? Did the words "snakes on a plane" always ring out with movie magic?

Movies like these, and a seemingly endless cycle of sequels and remakes, are proof that the movie industry has exhausted its storylines. These days producers are looking anywhere for new ideas. Raindance organizers have been hosting Live Ammunition for 18 years in the U.K., and boast that the blockbuster Stiller-De Niro pic Meet the Parents was first pitched at one of their events. A Universal Studios exec just happened to be listening from the back of the room. 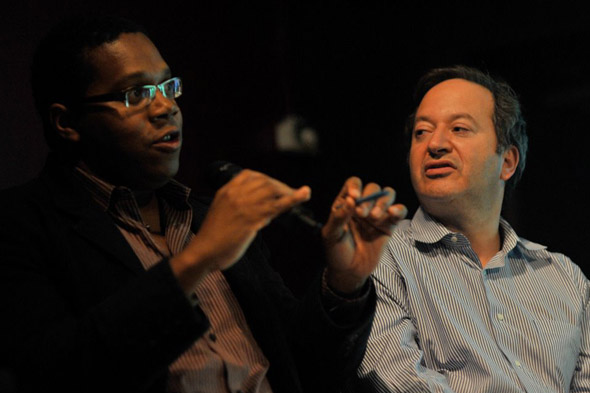 But one hour and a dozen pitches into the evening, I began to wonder if the event's title was a wry joke. Live ammo certainly came to mind, because some of these guys looked like they were getting up in front of a firing squad instead of a panel of film execs. Bombarded by a steady stream of inscrutable plot twists, half the time I was just waiting for the gong to sound to put pitchers out of their misery.

Many had the annoying habit of describing their movie by comparing it to already existing ones: we were asked to imagine the Office meets Fubar, Seabiscuit meets Rocky, Clerks meets Pulp Fiction, Fubar meets Waiting for Guffman, Lars and the Real Girl meets American Pie, and Gosford Park meets Deadwood with a little twist of Mark Twain.

The panel for its part did its best to provide helpful advice. You want "no beige, no bland," when pitching a film, said Lyon. "It's helpful to think about what your movie poster will look like in a few years. What's the tagline?"

CBC Radio's film critic Jesse Wente, who played host for the evening, offered up this gem: "Cyborgs are often hilarious."

What many participants lacked in experience or public speaking skills, they made up for with passion and self-belief. Some of the contestants who didn't win, like the young woman who spoke passionately of a movie on El Salvador's civil war, were sympathetic. Others were not, like the shy young man in black who described in alarming detail a scene in which his protagonist disembowels a chained and naked woman while she writhes in pain. Not satisfied with creeping out the entire audience for his allotted two minutes, as he left the stage he passed out tiny jars to the panel containing miniature nude women curled up the fetal position. Let's hope he's still single, am I right ladies?

But among the confusing and the creepy, there were some ideas that could easily make it to theatres. An obvious money-maker was European Vacation, about two worried mothers who secretly decide to tail their daughters on their backpacking trip (spoiler alert: it's the mothers, not the daughters who end up in trouble, and everyone learns a little something along the way).

In the end the grand prize went to Randy Brown, Gravenhurst chocolatier by day and screenwriter by night. His winning story All Inclusive was about a group of guerrillas who take hostage a high-end resort in Mexico. Brown certainly knew how to make a pitch; his two minutes contained all the right phrases: "socio-political thriller", "oozing with machismo", and "bikini-clad women." He even had a tagline. "It gets hot... in Southern Mexico."

Beats "Titans Will Clash", at any rate.