The Reel Asian International Film Festival is due to hit Toronto screens in two days (from November 11th to 15th). Not so surprisingly, Reel Asian covers a large scope in its 13th annual run -- from a farming community in rural Thailand to a gay community in San Francisco.

Never knowing what to expect next, I was drawn into watching one preview DVD after another. And having voluntarily skipped the sunny weekend to screen Real Asian picks, I can confirm that there are definitely a few movies worth checking out in this year's lineup.

Overheard
What happens when three cops cash in on a tip overheard on a surveillance recording? An insider trading investigation storyline turns into a cautionary tale about greed. The writing team behind Infernal Affairs (Alan Mak & Felix Chong) explore a new set of ethical questions in this smart police drama set in Hong Kong. With a suspenseful plot, strong cast, and blockbuster budget Overheard is bound to be a crowd pleaser and is a solid choice for the festival opener.

Breathless
The closing film comes to us from South Korea after having picked up a ton of awards (that I will not name here) at festivals all over the world (for the film and its actors). First-time director Yang Ik-June is also in the lead role as Sang-Hoon, a "debt collector" with a mean and violent streak. His temperament works well on the job but not so much with colleagues and family. Breathless develops into an unlikely friendship story when Sang-Hoon meets a teenage girl with a thick skin and a penchant for swearing.

Fish Story
Between a Japanese punk band in 1975, a driver in 1982, a hero in a ferry hijacking incident in 2009, and three guys in a record store waiting out the last few hours before the end of the world in 2012, Fish Story explores an unpredictable and unlikely chain of events.

Fruit Fly
Bethesda, a Filipino (American adopted) performance artist has no trouble fitting in with an unconventional bunch of roommates, while off on a brief stint in San Francisco. Fruit Fly offers theatrical-like entertainment, a rare treat on the big screen. (OK, so the musical numbers are a bit hokey). 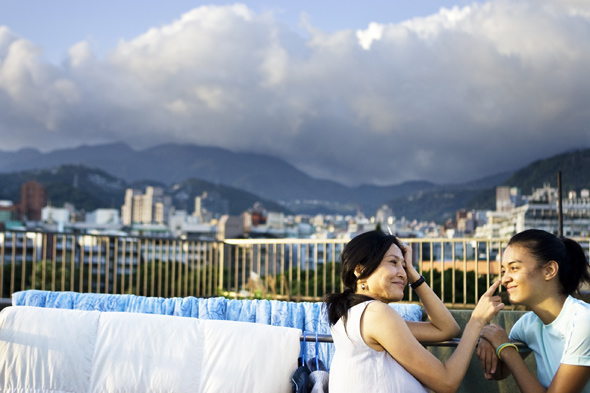 Yang Yang
Cheng Yu-Chieh appears to have made this film as vehicle for Taiwanese actress Sandrine Pinna. As the titular character, she has ample opportunity to showcase her Eurasian good looks and decent acting chops here. The story, roughly, is that Yang Yang's mom gets married and Yang Yang's new stepsister gets increasingly jealous of all the attention the French-Chinese beauty attracts (mostly from said stepsister's hearthrobish boyfriend).

Agrarian Utopia
Rice farmers in Thailand work hard and earn little in Agrarian Utopia. With long, beautiful, (and did I mention long?) shots of rice fields and an emphasis on the daily grind, the film has the look and feel of a documentary.

All this, plus parties, panels, installations, and more movies. Visit the Reel Asian website for schedule, tickets, and venue details.