Spike and Mike's Sick and Twisted Animation Festival is coming to Toronto with a new show. While I only have a vague memory of anything pre-TIFF, as the Festival is coming to a close this weekend, I'm shifting gears a little - to a solid hour and a half programme of gross and edgy cartoons. Move over Clooney.

Spike and Mike (aka the "Kings of Tasteless Toons") founded the festival in 1990 and have introduced a new show at the San Diego Comic-Con every year since. The festival tours in across 50 cities in Canada and the U.S., and has, over the years, premiered classics like South Park and Wallace & Gromit on the big screen.

Weird, funny, and offensive as ever, this year's set running at the Bloor Cinema from September 18th to 26th is a messed-up mix of old and new picks. 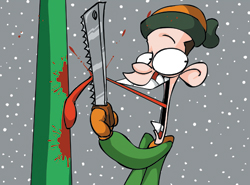 In case you missed the hot girls dressed in nurse uniforms handing out brochures in the TIFF movie lineups, here's a roundup of what's in store:

A cow and a sheep battle it out in Animal Instincts, Cameron Edser's claymation take on barnyard politics. One of my favourites in this set, it's basically a silly action-packed fight sequence. Another gem is a pencil-drawn exchange between two store clerks who have just taken some acid (one of them unknowingly) called 2 in the AM PM.

Then, there's the raunchy 2 Minute Itch about a dog can't help rubbing one out on a sexy poodle. This gets him into a wee bit of trouble because the pooch is not real, she's a print on his owner's pillow. Lapsus from Argentina brings to life some innovative visuals with a black and white palette. Plus, The Furious Little Cinnamon Bun and gross-out faves the Happy Tree Friends going Out On A Limb.

And, of course, Sean Scott's Tongue Twister is your classic Spike and Mike fare (a man sticks his tongue on a lamppost in winter and gets stuck).

Spike and Mike's Sick and Twisted Animation Festival runs from September 18th to 26th, 2009 at the Bloor Cinema (see website for showtimes). Tickets are $10.

Stills from Animal Instincts and Tongue Twister courtesy of Spike.