When TIFF 2009 officially kicks off in two weeks, I won't be lined up trying to get into the new Coen Bros' movie. Oh no. This year I'm reading the enormous Program Book, drawing up a schedule, and deciding who to stalk before the September 10th film festival opening.

Some modest and foreign films in the lineup might fail to charm distributors and will never be seen again in Toronto. So is it best to catch the latest from Michael Moore and Terry Gilliam or to gamble on something new? And of course Matt Damon will be here for the opening of Soderbergh's The Informant!, but what about stars we actually want to see?

Midnight Madness headliner Jennifer's Body, penned by acclaimed Juno screenwriter Diablo Cody, is likely to kick off with the hot demon-possessed cheerleader (Megan Fox) and her cute nerdy friend (Amanda Seyfried) in attendance, as both are on the official TIFF guestlist. Tilda Swinton leads the cast of I Am Love, an aristocratic family drama set in an Italian mansion, while Natalie Portman is probably the main attraction for anyone buying tickets to Love and Other Impossible Pursuits.

Heartthrobs are also being served up on the red carpets. Clooney gets top billing in two promising films: he is a consultant whose main passion is banking up travel miles in Jason Reitman's Up In The Air and is a mustached "secret" soldier and the subject of a washed up journalist (Ewan McGregor)'s story in The Men Who Stare At Goats. Clive Owen is in for The Boys Are Back and Micheal Cera continues to redefine the romantic leading man in Youth in Revolt.

Half the cast of Joel Schumacher's St. Elmo's Fire (1985) are in town, which fits in nicely with my half baked prediction that John Hughes memorials will stir up some interesting comebacks. Demi Moore (paired with David Duchovny) is in a suburban consumerist culture comedy The Joneses, Rob Lowe plays Ricky Gervais' rival in The Invention of Lying, and Ally Sheedy is likely to taking on a bold role in Life During Wartime, the latest from Todd Solondz (Welcome to the Dollhouse, Happiness).

Werner Herzog is one of the most inspired filmmakers of all time, period. Why one director with a large body of celebrated works ends up in TIFF's "Masters" section and another doesn't, is a mystery that might be explained when we finally get to see Bad Lieutenant: Port of Call New Orleans (see the trailer here). Herzog has made it clear that the film is not a remake and not a sequel to the 1992 corrupt cop flick starring Harvey Keitel.

Even if this update is a total disaster, Herzog and Nicholas Cage are scheduled to appear at the opening screening - and I wouldn't miss a Q&A for this one. In an equally strange pairing, David Lynch on as Executive Producer for Herzog's second entry in the fest My Son, My Son, What Have Ye Done, starring Willem Dafoe and ChloĂŤ Sevigny.

I'm counting on The White Ribbon not being nearly as dull as it sounds. Michael Haneke (Funny Games, CachĂŠ)'s latest, set in a small farming village on the eve of World War I, took the prestigious Palme d'Or for best film at this year's Cannes Film Festival.

That brings me to Antichrist. The trailer might give us a hint as to why it was the most talked about film at Cannes, but I plan to attend to hear Lars von Trier's explanation (via live video feed because the man is afraid of flying). Charlotte Gainsbourg and Willem Dafoe are in a "graphic nightmare vision about gender relations" in this one. Following the death of their child, they head out to an isolated cottage and get violent with each other.

Local editor-turned-director Reginald Harkema has a fresh take Charles Manson's trial in Leslie, My Name Is Evil, his follow up to the acclaimed Monkey Warfare. And from Montreal, Jay Baruchel (Tropic Thunder, Knocked Up) believes that he is the reincarnation of the Russian revolutionary in The Trotsky. Colm Feore is in this one too.

There are 29 homegrown features and 44 shorts in this year's lineup, including Carl Bessai's Cole, Atom Egoyan's Chloe, and Sherry White's Crackie. 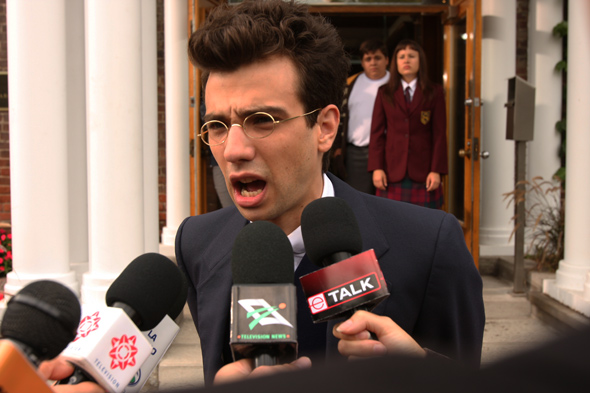 Stills: Nicholas Cage in Bad Lieutenant: Port of Call New Orleans and Jay Baruchel is The Trotsky courtesy of TIFF.