On the Set of "The Shrine", Toronto Fills in for Poland

How could I refuse an invitation to visit a torture chamber in a catholic school? It was a sweltering hot day last week when I dropped by a tomb-like film set on Manning (near Dundas), where the team behind Jack Brooks: Monster Slayer have been holed up shooting scenes for their sophomore horror venture, The Shrine.

Toronto is not the first place that comes to mind as a stand-in for a remote Polish village (where the story is meant to be taking place). But luckily for Ottawa-based director Jon Knautz, torture scenes can be filmed just about anywhere.

So, Meghan Heffern (Chloe, American Pie Presents Beta House) - playing an American journalist who has just been captured by a mysterious cult - is about to do a lot of screaming today. While I tour the studio set, the makeup crew is prepping her to be sacrificed.

Along with a cross-shaped tomb bed (pictured above), the room where they'll be shooting the next scene contains a wide selection of rusty tools and shackles. A row of masks lined up on the wall seem to be the main instruments of torture. Pointy nails stick out from behind them, long enough to poke through the victim's eyes and skull. I got the full rundown of how this works and then saw a video clip demo from the previous day's shoot (inlcuding a whole lot of blood gushing).

Here we are, in the heart of summer and most of the cast members are dressed up in dark heavy cloaks for a cult ritual scene. After Meghan is in place on the cross and a sufficient amount of makeup blood has been poured onto her wounds, the camera is ready to roll.

Knautz sets up the scene... Meghan whimpers... The evil cult leader declares something in Polish while a mask hovers over Meghan's head.

A couple of takes later, the crew moves on to set-up the next scene.

Jon Knautz is not relying on CGI to build the movie's monsters and supernatural effects. Instead he is opting for a more traditional horror aesthetic, much like he did with Jack Brooks: Monster Slayer. While The Shrine should appeal to the same audience that made a cult hit of Jack Brooks (a horror/comedy about a plumber-turned-monster hunter), producers are promising a bonafide terror outing this time around. 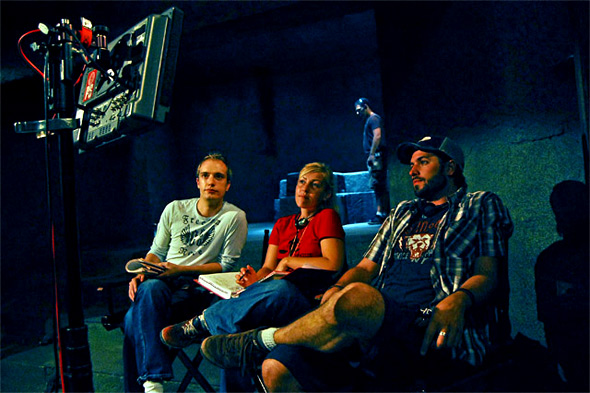 Synopsis
Curious journalists on the trail of a missing backpacker in Europe end up in a remote Polish village called Alvaina. Their search uncovers a local cult with a violent history, some "supernatural elements" - and plenty of reasons to run!

Visit the official site of The Shrine for daily behind-the-scene photos.

In the meantime, I recommend renting Jack Brooks: Monster Slayer for some campy entertainment.