Photo: "in the spotlight" by indian nomad, member of the blogTO Flickr pool.

The TIFF red carpets rolling out have always signaled the end of summer for me. Every year in September, a slew of mega-celebrities descend upon Toronto, along with their agents, handlers, and paparazzi photographers from all over the world. It's all buzz and excitement, but by the end of it, you need to wear a jacket outside and go back to your daily grind.

Fortunately, there are 58 days before the official kick-off and that's plenty of time to work on my tan and to get excited about this year's programme.

The Toronto International Film Festival announced its lineup of galas at the Hyatt this morning, including a selection from left field in the prestigious opening night film slot.

TIFF co-director Cameron Bailey, easily one of the sharpest dressed men in Toronto, made the announcement that Creation, a film that tells the story of Charles Darwin's life will open the festival on September 10th. It came as a surprise because TIFF traditionally starts off with a high profile Canadian feature. There had been speculation that Atom Egoyan's latest project Chloe would take the spot.

The British film by Jon Amiel (The Core, The Man Who Knew Too Little) stars real life couple Paul Bettany and Jennifer Connelly as Charles Darwin and his wife. According to Bailey, the thriller/love story sets the tone for the festival, where the conflict between mind and heart, or reason and faith, is central in many of this year's features, docs, and shorts.

Piers Handling, festival Director and CEO, assured the group that TIFF continues to be committed to Canadian films and that a full roster of homegrown features will be announced in a few weeks.

Who/what else is coming to Toronto? Although the guest list has not been confirmed, possibilities include Clive Owen, starring in a single father story by Shine director Scott Hicks, The Boys Are Back. Tim Blake Nelson's Leaves of Grass with Edward Norton as twins, one of which has stayed behind in their home state to grow pot. Neil Jordan premieres Ondine, in which an Irish fisherman (Colin Farrell) catches a woman in his nets, and life changes ensue. Steven Soderbergh teams up with Matt Damon again for a corporate whistleblower movie The Informant!

Most of my male friends all have the hots for Eva Green (Casino Royale, The Dreamers), also set to appear on screen, as are Michael Douglas, Robert Duvall, Ricky Gervais, Bill Murray, Kristin Scott Thomas, and Sissy Spacek.

Films buffs note that edgy French director Bruno Dumont premieres Hadewijch and Jane Campion's Bright Star is showing. Though not getting the gala treatment, Alain Resnais' brings Les Herbes Folles to North America and Romania's acclaimed Corneliu Porumboiu returns with Police, Adjective. Number one on my to-see list at this point is Andrea Arnold's follow up to Red Road, Fish Tank, about a violent teenage girl in love with her mother's new flame.

The Toronto International Film Festival will run from September 10th to 19th, 2009. Ticket packages are on sale now, online and at the new Nathan Phillips Square Box Office, a white tent at 100 Queen Street West.

Still from Creation (below) courtesy of TIFF 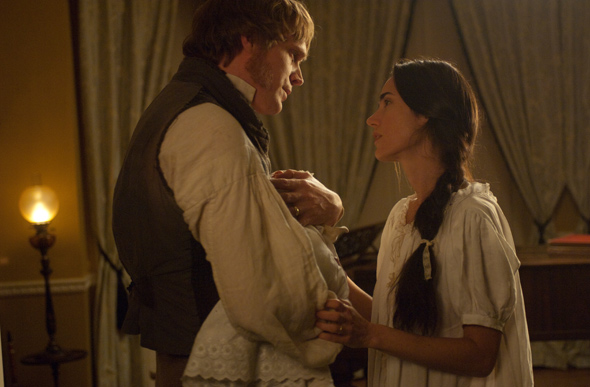