While Toronto is host to the biggest documentary film festival in North America, one of the most popular international film festivals in the world, and more specialty film festivals than I can find an accurate count of, the animation industry meets every year in the national capital for the Ottawa International Animation Festival (OIAF).

So what are Toronto cartoon fans missing out on? Billed as the Best of Ottawa 2008, the NFB Mediatheque and the Toronto Animated Image Society are presenting highlights from last year's festival tonight (Wednesday, July 22nd) at 7pm at the National Film Board theatre.

The screening surveys top picks from the OIAF's Official Competition - nine very creative and unusual animated shorts conceived without the limits of live-action. 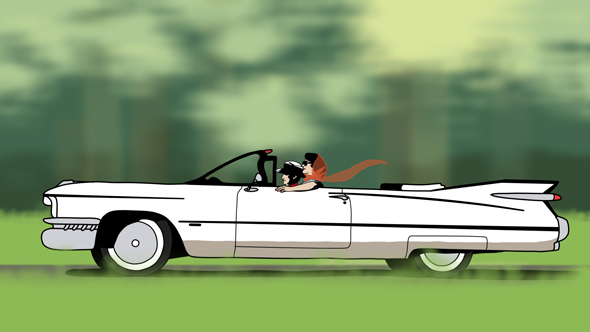 The real standout for me is The Control Master by London (UK) based commercial and music video director Run Wrake. Wrake imagines a strange and stylish halftone city, a wacky plot that involves a bald man in a purple suit (pictured above) wreaking havoc. He chases after a beautiful blonde and turns her into a bearded creature, only to be confronted by the army, cowboys, and a spaceman.

The multi-award winning Chainsaw closes off this set. It's a 25 minute romantic tragedy that blends a love triangle between Frank (a logger) and Ava Gardner (a cashier) and a rodeo star, with the juicy real life gossip surrounding Frank Sinatra, actress Ava Gardner, and bullfighter Luis Miguel Dominguin in the 1950s.

To complement the screening, the NFB is putting on a beginner animation workshop (for adults!!) in the evening on Thursday, July 23rd. $5 buys you a three-hour crash course on 2D animation techniques including drawing on film (to create one second of animation), scratching off film emulsion (then colouring over it for effect when projected), and painting on glass using a lightbox (to give the effect of shadows). A 3D pixilation exercise (involving photographs of workshop participants) is also lined up.

Screening and workshop registration details are available online, or at the NFB Mediatheque, 150 John Street.

Stills from The Control Master and Chainsaw courtesy of the Ottawa International Animation Festival.