I organized the 2008 Awards as well as this year. 2006 and 2007 were organized by the previous manager of Good For Her, Chanelle Gallant.

The awards show is really fun, and really celebratory, and really grassroots. This year, we are having Raging Asian Women (RAW) open the awards with their sexy and powerful drumming, and Coco La Creme and Daddy K and the Rhythm Method and Boylesque Toronto will all be there to keep the crowd entertained. We present awards with (mostly) local sexy people (writers, educators, filmmakers and more) as presenters, and we show clips from the winning movies. I would say it's more like an NC-17 rating, more dirty than an R but not quite an X (usually! There are a few exceptions that are a bit more saucy!)

Can you list a few examples of some of the award categories?

The Awards categories that we have this year include Hottest Straight Movie, Steamiest Educational Series, Most Deliciously Diverse Cast, and Movie of the Year. There are 12 Categories in all (as well as Honourable Mentions)

Who are the major artists or filmmakers working in this genre, and what kind of work do they do? 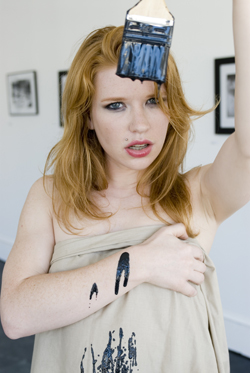 In the industry as a whole, here are some of the biggest names:

Anna Span: Makes rather filthy movies! She is from Britain.

Madison Young: Going to be at this year's awards! Is a writer, director and performer as well as the owner of a feminist art gallery in San Francisco. Madison is notable as she is both behind and in front of the camera as well as being very very very kinky!

These are some of the biggest names right now, but there are a lot of people who are doing amazing things!

If slapping and suspension are your scene, you will fall in love with Madison Young. The 28 year-old from San Francisco writes, directs, and stars in Tail of a Bondage Model: Real Life Memoirs of a Rope Slut. The film centers on the kinky redhead, a jet-setting model and aspiring writer, struggling to hold on to her new girlfriend while juggling a busy work schedule.

Also well crafted, Champion, Shine Louise Houston's film about an MMA fighter and her various romances. Out of the fighting ring, Jesse has to deal with a lingering ex, an ambitious manager, a lifelong enemy, a one night stand with Madison Young, and a crush on her final opponent.