Instead of a movie title, the marquee has advertised the cinema's "for lease" status since 2006. It's one of several repertory cinemas in Toronto that closed that year.

Joe Jacobs, a local and the main organizer of the meeting, wants to revitalize the space as a non-profit community arts organization. He was tired of passing-bye the Paradise and wondering why it is still empty. 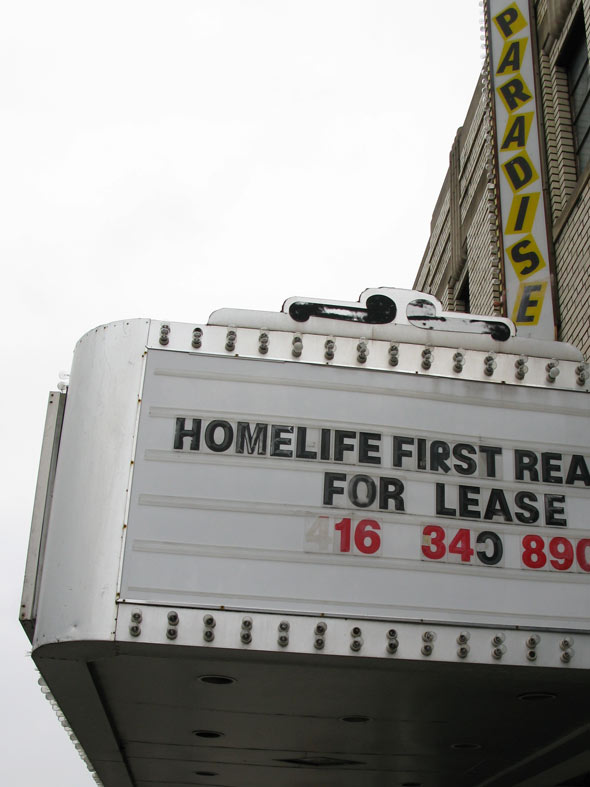 Some digging with friends Jordan Lewis and Sarah Latha-Elliott included a tour of the building and initial discussions with the landlord. They also got verbal support from the local BIA and city councilor Adam Giambrone and some advice from the Revue Cinema. The Revue is one of the theatres that also closed in 2006. It was up for sale before a local couple bought the theatre and let a community organization run it.

Though funding was a big issue during the meeting, Jacobs is optimistic the Bloorcourt cinema can also be saved. He wants to try anyway. The fifty or so residents that sat and stood around the room want to try too. They had plenty of ideas on what the new Paradise could be. They ran the gamut from remaining a traditional theatre, to reviving vaudeville.

I live in Bloorcourt and remember the collective groan when it closed. Before the meeting started, a group of us lamented the convenience of a movie theatre steps from our homes.

If the room's enthusiasm and comments on their Facebook page are any indication, it won't be long before I can head out the door again five minutes before a show starts.