A Drink, A Sofa, and A Remix Manifesto

"I'm an old school geek!" Gaylor wrote via email yesterday, explaining how he got onto the subject. "I sort of grew up at the same time as the internet, watching it evolve from terminals and telnet to the World Wide Web. There was always this tension between the Internet ideals of information sharing and the existing corporate models. When Napster emerged, I knew that this had reached a certain peak, and I began thinking about how to make a film about copyright and culture."

Do copyright laws stifle creativity? In the film, Gaylor argues that mega corporations have the most to gain from intellectual property rules, and that creating requires "sharing". 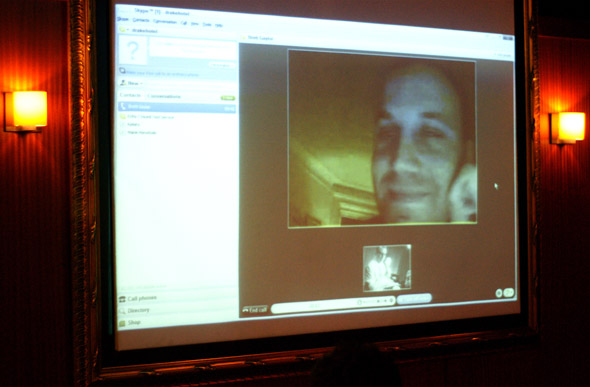 He spends a lot of time following biomedical engineer-turned-remix artist Girl Talk (Gregg Gillis). The music mixer is openly experimenting with pushing the boundaries of infringement laws. Gillis admits to blatantly sampling between 200 and 250 loops on his album Night Ripper, none of which he has obtained permission to use.

Taking advantage of grey areas in the "fair dealing" clause of the Canadian Copyright Act, Gaylor was able to legally use Girl Talk's music (and some sexy live clips) to make a point about the politics of sampling.

For this installment of the monthly post-screening Q&A series, Brett Gaylor Skyped in from his home in Montreal. I sit on a comfy couch enjoying the last of my wine with fellow blogTOer Roger Cullman, while Richard Crouse moderates a discussion about the film. It leads to a lively debate about copyright: maintaining artists' rights? a vibrant public domain? are they mutually exclusive?