Unless you've been touring the European film festival circuit in the past few years, you probably haven't seen these films. Cinematheque Ontario brings Germany's best and brightest to Toronto audiences in a programme called States of Longing: Films from the Berlin School.

According to programmer Andrea Picard, part of the Cinematheque's mandate is "to champion films that are worthy but do not fit any theatrical model... and frankly speaking, the impetus behind this series was a not-so-sly corrective to address the fact that so many of these great films - which have shown and won prizes internationally - have not yet screened in Toronto."

The series will feature contemporary films by a network of directors that first emerged from an actual school - the "dffb" (The German Film and Television Academy Berlin). The network sort of evolved during the past decade and the term "Berlin School" has been thrown around to describe the group (although it is not an actual school, and not all of its members are actually from Berlin). Still, filmmakers associated with this movement are making movies that depict a similar view of modern life in Germany and their works stand apart from the rest of the country's popular commercial industry.

"I stumbled upon the Berlin School films rather late," Picard explains, "say five or so years ago. It was certainly much easier to read about them, than to see them. Magazines like Film Comment, Cinema Scope, Sight & Sound and Cahiers du cinema have been reviewing and championing these films for over a decade. I finally went to see some of them over the last few years while attending the Viennale (Vienna International Film Festival) and the Berlinale, at the prodding of my friend Olaf Moller, a German film critic. I was impressed time and again, and wanted to see the whole lot of them."

Christian Petzold's The State I am In is often cited as the film that launched the movement. The story centers on an angst-ridden teenaged daughter of ex-terrorists. If your parents are on the run from the law, can they really tell you not to smoke or see your boyfriend anymore?

Another highlight of this series is Maren Ade's debut film, The Forest for the Trees. The low production values of this film seem to work with the characterization of Melanie as a plain schoolteacher who moves to a new city to start her career. Her keenness is often perceived as desperation by colleagues, students, and new friends. Things go badly from there.

In A Fine Day, a young actress wanders around her residential neigbourhood after breaking up with her boyfriend. And in Marseille, a young photographer wanders around Marseille taking photos. Without a gripping story or much action (the Berlin School often get this criticism), the strength of both of these rests in their compelling lead characters.

The Days Between is probably the sexiest of the films reviewed here. Maria Speth borrows Wong Kar Wai's nocturnal eye to follow a cafeteria server - dancing, drinking, smoking, and drifting around the city at night. Lucky for her, she finds a distraction from her Olympic swimmer boyfriend in an equally striking Japanese student. 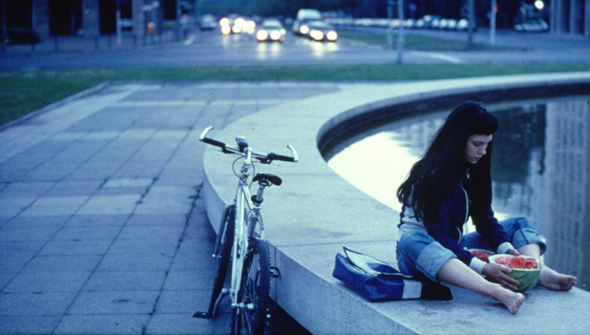 Picard has just returned from the Berlinale (Berlin Film Festival), where Maren Ade's second feature, Everyone Else shared the Jury Grand Prix and won the Best Actress award for one of its leads, Birgit Minichmayr. "This is considered a major accomplishment," she says, "as many of the films from the Berlin School have not been as praised on home soil as they have been throughout greater Europe."

So, will there be more from the Berlin School? Picard responds with optimism, "yes, many features are in pre-production and these young directors have shown no sign of slowing. I'm sure, at some point the Berlin School label will be shed, but these directors names and films will only become better known, at least to those with an affinity for European art cinema."

States of Longing: Films from the Berlin School runs from February 20 to March 14 at Jackman Hall, 317 Dundas Street West.

Stills from A Fine Day and The Days Between courtesy of Cinematheque Ontario.