At the corner of Dupont and Gladstone, behind large paper-covered windows, the Liaison of Independent Filmmakers of Toronto is moving in. The new custom-designed facility is all bare walls and boxes - but Ben Donoghue, its Executive Director, assures me that LIFT is officially open.

Rising rent costs sent LIFT packing from its Liberty Village studio in August. With the help of volunteers and donors, the equipment went into storage and the office set up its temporary headquarters at Trinity Square Video and YYZ. Since then, Donoghue and his crew have been working late nights to turn this new 6,500 sq. ft. space (formerly an electronics shop) into a film production and education hub.

Ben had me over for a tour of the new building.

The main lobby is an open concept office area, and behind it a classroom has been set up for workshops. Shortly after I arrived, participants started to trickle in for a two-evening "Introduction to Documentary Filmmaking" session. The course is part of a series focusing on documentary (that kicked off last week with a panel discussion at the NFB Cinema).

Further in, a dozen or so rooms have been customized to house Final Cut Pro editing suites, traditional film editing rooms, specialty animation stands and printers, a Telecine and negative scanning suite, plus there will be a sound recording facility on site. With my film cameras collecting dust lately, I look forward to visiting what will soon be a wet darkroom.

In the next few months, the plan is to roll out equipment and facility rentals as the gear gets unpacked.

LIFT started out in 1981 as... um... a liaison of independent filmmakers. Toronto's most renowned directors have had some association with the not-for-profit organization over the years. Now, LIFT is Canada's foremost artist-run center specializing in celluloid filmmaking. With its rare equipment and on-site expertise, the studio attracts national and international artists.

Donoghue mentions that while there is no specific focus on genre, the facility has recently been host to more and more experimental filmmakers and animators. He sees this as part of a "broader trend, as film's position shifts."

As an example, he tells me about "Cinema and Disjunction", a project commissioned by LIFT and co-presented with Cinematheque Ontario in the fall (and recently touring the Pacific Cinematheque and film co-ops in Vancouver). The architectural series includes Adrian Blackwell's Night Equals Day, a twelve hour recording from an intersection at Regent Park condensed into a 30 minute film. The camera does a three-hundred-and-sixty degree camera rotation per hour. A second film by Daniel Young and Christian Giroux is described by its title, Every Building, Or Site, That a Building Permit Has Been Issued for a New Building in Toronto in 2006. "So many people are using video for what they would have used film for 20 years ago," Donoghue notes, "I think [celluloid] is becoming more of an artists' medium. It's finding a larger set of uses in gallery environments." 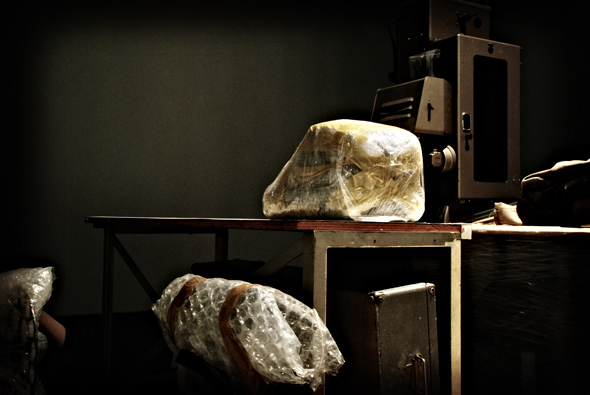