Toronto filmmaker and subcultural historian Ron Mann documents the world of fungi in his latest release, KNOW YOUR MUSHROOMS. The film investigates the environmental, culinary, and psychedelic uses of mushrooms - with footage from Mann's visit to the annual Telluride Mushroom Festival in Colorado, combined with animation and archival material, plus an original soundtrack by the Flaming Lips.

I have not seen the movie yet, but the idea of a subculture of fungiphiles gathering at an annual mushroom festival is definitely intriguing. I asked Mr. Mann what got him on to the subject.

"So this totally happened because my friend, filmmaker and fungiphile, Jim Jarmusch turned me on to the Telluride Mushroom festival which is a gathering of people crazy for mushrooms. I went into the forest with Larry Evans (the Indiana Jones of mushroom hunters) and mushroom guru Gary Lincoff and I never came out of the forest the same person. My trip (literally my trip) expanded my mind about mushrooms - which up until this point for me was like one of those foods that you would see on "Fear Factor". Hold the mushrooms, thank you! I learned at Telluride how mushrooms are the above ground fruit of an interconnected subterranean web that sustains the planet. And they act as healers - Oyster mushrooms for instance can be used to clean up oil spills. Mushrooms are mysterious and alien and straight out of science fiction - did you know by the way that their DNA is closer to humans than to plants? I'm completely fascinated by theories by psychedelic author Terrance McKenna who speculated that a highly intelligent spore traveling through space inoculated our planet. Probable? I don't know.... but fun to wonder about."

Ron, you've convinced me that I need to know more about this mysterious organism (and, I will see any film that has the slightest connection to Jim Jarmusch).

Ron Mann's distinguished career has brought us fascinating glimpses into the worlds of recreational drug use (GRASS), comic book history (COMIC BOOK CONFIDENTIAL), and custom car artist Ed "Big Daddy" Roth (TALES OF THE RAT FINK). His take on "alternative cultures" has also earned him this year's Focus On retrospective at Hot Docs, where his body of work will be showcased.

KNOW YOUR MUSHROOMS opens in Toronto at The Royal on Friday, January 30 and is on screen until Tuesday, February 3rd. The 16th Annual Hot Docs Canadian International Documentary Film Festival runs from April 30th to May 10th, 2009. Images courtesy of Ron Mann/Sphinx Productions. 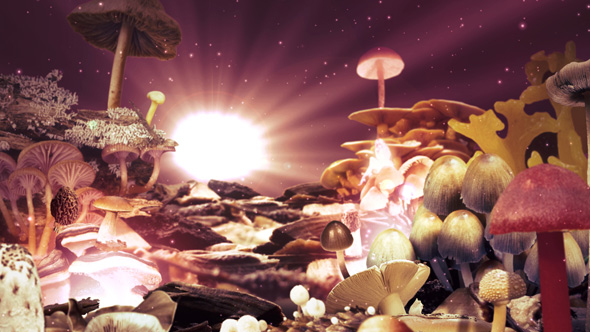