Bruce McDonald is offering up schmoozing and bragging rights to finance his new movie, A Love Supreme. Co-directed by Peter Lynch (of Project Grizzly fame) and based on a Coltrane inspired novel by Toronto writer Kent Nussey, A Love Supreme is a music-filled film about a boy and a girl and some jazz.

Last night I attended a fundraiser for the film at the Trane Studio (964 Bathurst Street), featuring jazz performances and a preview peek at some of the footage. Still in production, A Love Supreme's creators are describing it as "a love letter" to Little Italy. Over 10,000 black and white photographs of the neighbourhood have been taken so far - and some of these are set to a jazz soundtrack.

Bruce (and his production team) have also cooked up an interesting fundraising scheme to to help finish producing the film - selling film credits. Thank-yous are going for $250... and an Executive Producer credit can be yours for a mere $1000! 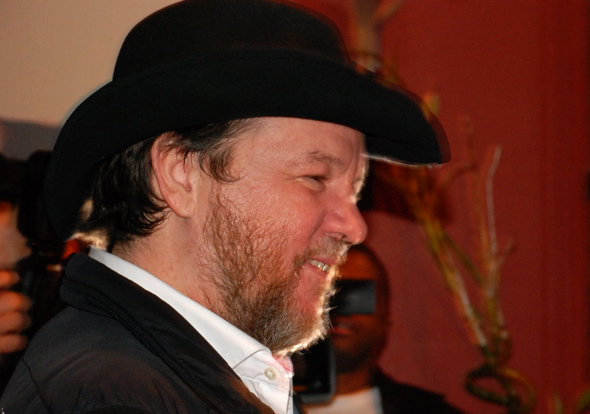 A still from A Love Supreme and Bruce McDonald. Photographs by Chandra Menard