Canada Screens Bring Films to a Bar Near You

While imbibing in a drink at a movie is sure to be a hot debate in the days to come in Toronto, the First Weekend Club allowed just that during the kickoff of their Canada Screens Toronto series last Sunday at The Drake Hotel Underground.

First Weekend Club hosts this monthly screening series that shows the best of Canadian cinema. Typically promoting screenings of accomplished home grown talent over Hollywood blockbusters, the series provides a more intimate setting in which to watch, and then interact with the director, of some talented Canadian film.

Admittedly, The Drake isn't the best place to spend over two hours watching a film. But they did have three screens up, so that no matter where your vantage point, you still had a good view of the movie. And the sound was excellent.

If you felt like a drink to help you enjoy the film, the well-equipped bar was nearby. A glass of red wine felt right when taking in a film at this venue. Even if it started at 2 p.m. on a Sunday afternoon. 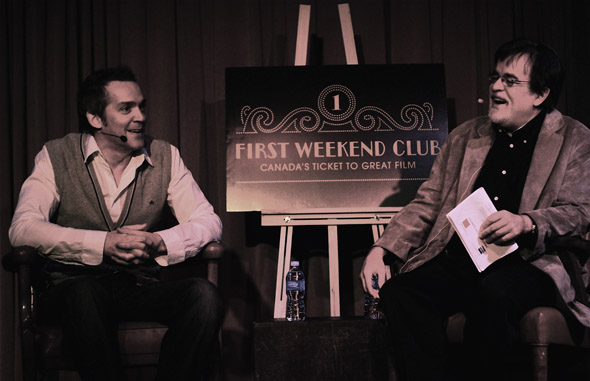 Sunday's screening was of the multiple Genie-award winning film C.R.A.Z.Y. followed by a Talkback with director Jean-Marc Valée.

In the discussion that followed the screening, we listened to a Q&A with the director, where they explored the making of his film and the journey of his career. While I found the interviewer to spend an inordinate amount of time doing the talking, the responses from Valée were enlightening.

For instance, I discovered that music plays a huge role in his films. For his next film, The Young Victoria was going to be scored with Sigur Ros, but was vetoed by the producers.

I loved the format of this First Weekend Club series, which comes to Toronto following its success at the trendy District 319 in Vancouver. The next Toronto screening is January 11, 2009.

The series is organized somewhat unusually. Tickets (just $12) were only available by advance purchase via PayPal). Unless you order 5- or 10-film passes by phone or email through First Weekend Club's website.

Still, it allowed for an intimate setting to take in some great cinema, capped with a discussion. Kind of like at the TIFF. Only on a smaller, more intimate scale, where you can enjoy a drink while you enjoy a film.