Adrift in Tokyo, The ReelAsian Experience

As Toronto's 2008 ReelAsian International Film Festival comes to an end, I am thrilled at the organizer's choice for last night's closing gala. Satoshi Miki's Adrift in Tokyo is a perfect film for this festival, plunking the audience down deep in the heart of Japan's capital city and immersing them in both a weird and wonderful Asian experience.

With a knack for sentimental comedies, Satoshi Miki's Adrift in Tokyo sets the protagonists up for both adventure and tragedy. Loner and loser Takemura (Joe Odagiri, a huge superstar in Japan) is paired with father figure, Fukuhara (Tomokazu Miura) on a strange journey of discovery through Tokyo's streets. 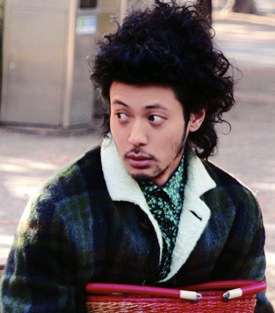 The unlikely pair's relationship goes through a complete transformation throughout the film. Fukuhara is first introduced as a bully, only interested in collecting on Takemura's debt. But when he realizes how poor and pathetic Takemura is, he instead offers him a million yen to join him on a walk around Tokyo. Unsure of Fukuhara's intentions, Takemura has no choice but to accept.

What follows is a sort of post-modern journey about the secret joys of exploring a city and having chance encounters. This is something like watching an Anais Nin or Henry Miller novel play out, with melancholy moments of insight inspired by the city surroundings. But we soon learn that this adventure is not taken on a whim, but is Fukuhara's last breath of freedom.

Strangely sentimental, the humour in this movie stems from Fukuhara accidentally killing his wife in anger. Guilty, his intention is to have company as he walks through Tokyo on his journey to turn himself in. As they visit places filled with memories of Fukuhara's wife and their intimate moments, the unwilling Takemura is forced to reveal his own past and thoughts. Having been abandoned by his father, Takemura is forced to face the nostalgia called up by the city and Fukuhara helps him to regain himself.

Eventually the two come to form a bond that helps fill Takemura's sense of abandonment, but not before a myriad of wacky Japanese adventures. One of the best aspects of the movie is how director Miki shares a glimpse into the craziness of Tokyo life without interrupting the journey. From a cosplay party with a 66 year old pervert, to an Aiyu shop buried in back streets and steeped in domestic turmoil, and then a watch shop run by a very old, angry, and skilled martial artist, Miki's clever use of music and framing is nothing short of artful, though hilarious. Despite what they encounter, both Fukuhara and Takemura approach the journey with a casual reverence that demonstrates their growing kinship.

The moral of Adrift in Tokyo is intentionally ambiguous, shared only in subtle scenic doses. As such, Miki does a wonderful job of maintaining the comedic atmosphere despite his character's sometimes heavy circumstances, helping to create a very sweet and sentimental Takemura in the end. There are no grand lessons here but rather many small insights into how people interact and evolve in the urban landscape. Much like Toronto, Tokyo is a city of many faces, and Adrift in Tokyo begs the question of how we create meaningful (and enjoyable) experiences in our city.