Tomorrow marks the launch of the 9th year of the imagineNATIVE Film and Media Arts Festival, an international event which celebrates and showcases Indigenous films, art installations, radio pieces and workshops from Native Canadian artists and those from all around the world.

Here's brief glimpse at some of the films that imagineNATIVE will be offering as part of its programming this week. 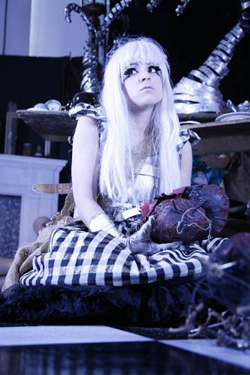 The film component of the festival contains a rather large amount of Canadian films this year, and always strives to reflect the most innovative of works by Native artists, whether it's documentary, fiction, musical, animated or even avant-garde or experimental. This year there seems to be an abundance of experimental films in the short category, some of which can be found in the program The Witching Hour which contains pieces about dreams, drugs, normal situations gone awry and a really bad hair-day.

Another experimental shorts program is Into the Looking Glass, and one notable short in that program is Alice Eaton, about a woman's gothic-inspired quest for belonging, which takes her to the underground.

Zacharias Kunuk, the imagineNATIVE alumnus and Cannes Golden Camera winner for his 2001 breakthrough film Atanarjuat: The Fast Runner, returns to imagineNATIVE this year with the documentary Exile. Following personal recounts and stories from Inuit families who were forced from their homes in Northern Quebec only to relocate to Ellesmere Island, Kunuk exposes one of the many abuses of the Canadian government in their attempt to expand Canada's borders in the north. Exile screens Friday at 5pm at the Al Green Theatre.

imagineNATIVE will also be hosting some free film screenings during the festival. On Thursday the free film will be a retrospective look at Kanehsatake: 270 Years of Resistance which followed the 87 day stand-off between police and Mohawk residents in 1990 and Friday will feature a documentary about those who grew up in Kanehsatake afterwards with Club Native.

Another film that caught my eye at the festival was Little Caughnawaga: To Brooklyn And Back, a unique documentary about Mohawk families who called both a reservation just outside of Montreal, and New York City, home. And last but not least, the Seeds of Change program, co-presented by the Planet in Focus Film Festival, which focuses on culture and history with regards to the ever-shifting status of the environment around us.

The imagineNATIVE Film and Media Arts Festival runs from October 15th-19th, and you can still purchase tickets in person or online, with regular screenings at a charge of only $7.