Eyesore Cinema is a new specialty DVD rental and sales shop on the second floor of 801 Queen St. W. where the Songbird Music used to be.

Not to be confused with the other eyesore cinema, Eyesore Cinema (the video store) has been open just under six weeks. Other than one wall covered with movie posters, the decor in the place still lives up to the store name. To their credit, they've already got a killer selection of over 3,300 videos.

"The manager Daniel Hanna used to manage the old Suspect Video store that burned down at 619 Queen Street West," says Justin Lourenco, the helpful fellow behind the counter.

"We're hoping to be the video store for people who love movies. You come here because you don't want to go into a Blockbuster store. We carry more of the strange films. Newer horror, stuff from Japan, exploitation cinema and old Italian Giallo thrillers from the '60s and '70s." 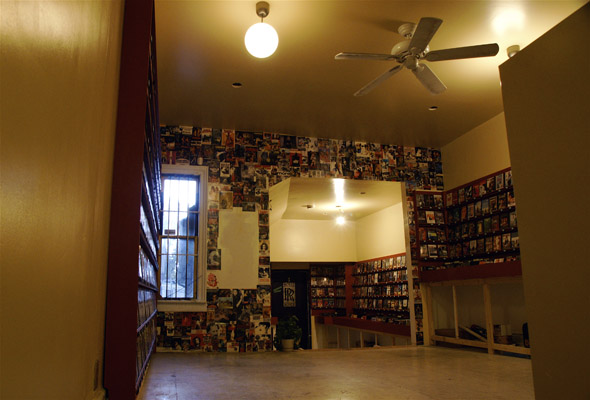 Walking by on Queen Street, you wouldn't even know Eyesore Cinema is there, as there's hardly any signage, apart from the colour photocopy sheet of paper on the wall at the foot of the stairs leading up to the store. Even this you can only see once inside the new Rotate This, which occupies the street-level store. There's no indication on the outside of the building, above the colourfully painted Rotate This sign, although I suspect there will be one soon. 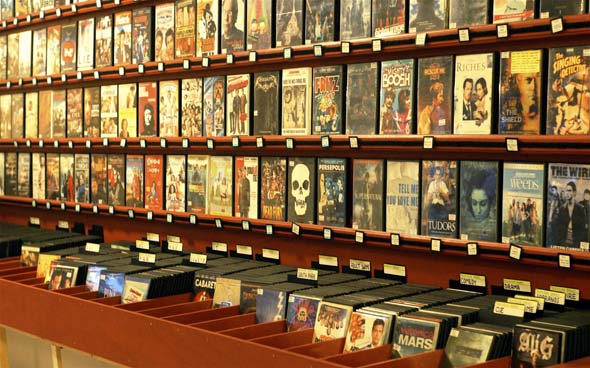 While they're also hoping to carry a selection of magazines (with genres similar to what Suspect Video stocked) Eyesore Cinema is primarily a DVD rental place. Although they also sell a few titles (perhaps a hundred at the moment). And they do special orders. 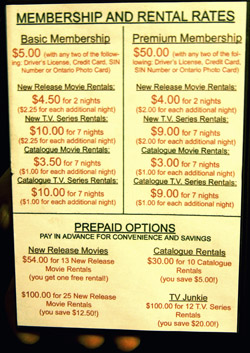 On the counter is a list with information on basic and premium memberships, with deals for prepaid rentals packages.

On the top shelf next to the front counter I see a special 10th Anniversary Edition of The Big Lebowski, complete with bowling ball. Nearby is Mad Dog Morgan, an Ozsploitation film starring Dennis Hopper.

When I go to a new restaurant I usually ask the server to recommend their favourite dish. So I asked Lourenco to tell me what from their currently available DVD rental selection are his favourites.

"Inside is a French horror film released earlier this year. And [REC] (pronounced record) is a Spanish horror film that's soon to be remade into a film called Quarantine.

I'm told about other popular selections at Eyesore Cinema, such as Iron Man, starring Robert Downey Jr. and The Mighty Boosh. Other faves include the visually stunning The Fall, from the director of The Cell with Jennifer Lopez.

I must admit, I haven't heard of a lot of these titles, but I'm tempted to give some a try, considering the vast knowledge and eclectic selections they've got at this place. 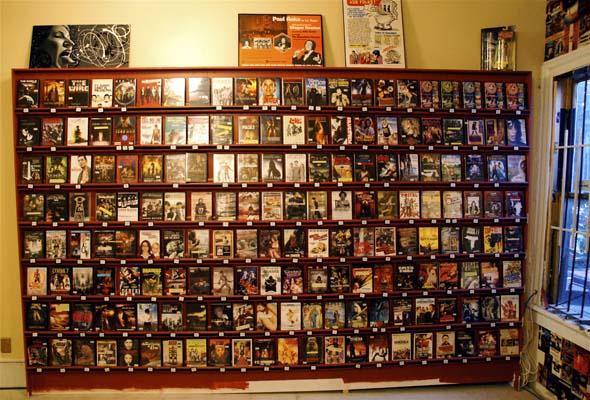 The shelves are nicely painted red, which contrasts well with the signage on the DVD headers, but it looks like they ran out of paint since the place opened. I'm sure with a little work and better signage, this place will bring a steady flow of clientele from the Queen West community.

It's the knowledge of staff and selection of titles at Eyesore Cinema that will set them apart from other video rental stores.

"It's no way a resurrection of the old Suspect Video," Lourenco insists. "But some of the hard-core film buffs do check us out."