This Friday evening, the Cinematheque Ontario hosts a sit-down with Canadian director Peter Lynch to discuss what really makes Lynch tick, his cinematic inspirations and what led him to document the unique characters (fictional or real) that his films have featured in the last 14 years. The lecture will be followed by a screening of Billy Wilder's The Lost Weekend, which Lynch promises will tie into his lecture somehow. Knowing his works, I believe it.

This lecture is the first in a special programme dedicated to the Toronto director which will screen all of his work to date. The programme is entitled Weird Science: The Idiosyncratic Archaeology of Peter Lynch and while we've interviewed him before, this time blogTO had the opportunity to ask Lynch a few more questions about his work as a whole and found his answers to be a fascinating glimpse into the mind of the man who brought us Cyberman and Project Grizzly. 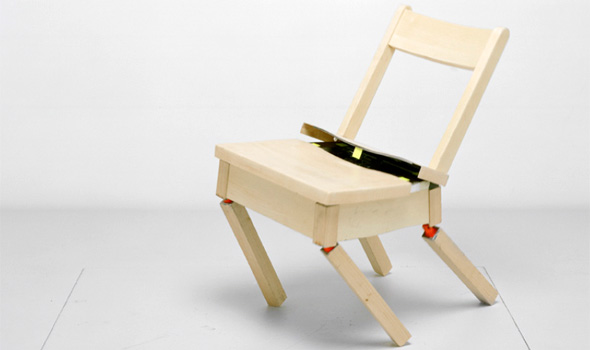 It's possible to describe an underlying theme of many of your films as anthropological, whether it focuses on the findings of the past (The Herd, Arrowhead) or the developments of the future (Cyberman), what do you hope to find next?

I aim to continue elaborating on these sort of anthropological investigations but hope to express and explore them on bigger canvas's, e.g. dealing with on-going struggles between humans and nature. But further specifically, I will explore these themes in fiction and in dramatic terms, I am never really certain what I will find when I set forth on my next project. Each film seems to have its own weight and takes on its own form and you need to be open to respond to this and give yourself over to it. I guess I would like to explore these themes with actors but continue to look for authenticity and truth with in the themes I am continually drawn to.

One project I am working on is loosely based on an art installation by Iris Haussler and deals with history, biography, art memory, and identity. Of course it has animals in it this time, it's rabbits, well sort of... Another is a noir film which deals with the surveillance of a marriage and with the nature of secrets and evolution and extinction, I am co-writing it with the author Paul Quarrington.

Both Steven Mann (Cyberman) and Troy Hurtubise (Project Grizzly) are two individuals whose interests and eccentricities have almost cost them personal relationships and in the case of Troy, his financial well-being, what was it that made them appealing to you?

I identified with them in the sense they are both mapping their own boundaries and embarking on very personal quests which are outside the official world of science or, say, engineering. There is also something I like about them both being futuristic and quasi science-fictional in their aesthetics. There is something makeshift and resourceful about their creations and approaches. Also, I see them both as performers and as showmen to some extent, like a performance artist. They both have what I call a sense of creative delinquency and delirium, a sense of play in their work which I share with and I like to go for when I make a film. They are also both obsessed with their dreams and aspirations and thus there is something quixotic which I identify with in both their projects.

One of my favorite parts of A Short Film About Falling was the young boy testing his strength against the gushing water, could that sequence perhaps act as a metaphor for your previous subjects?

Yes! In terms of finding different ways of feeling and experiencing the throb of existence and nature absolutely! That particular scene is a story transposed by a story which happened to my co-director Max Dean as a young boy while he was crossing a mountain road in Vancouver after a flash flood. The other kids that day were taken across the road by a fireman and young Max decided to go it alone. For us, we asked ourselves, when we are not at the falls is the water still going over the edge? When we are not with the chair is it still falling down and putting itself back together again? Why later in life do we need to tell these stories? Are they still the same story just told in a different way? Is Max still the little boy in the river?

It seems it is about choice and the desire to go it alone, so in that regard I would agree it is a feat of strength to take on the natural elements on your own conceptual journey. I guess confronting the fall contains the element of hubris and possible failure and the risk is sysiphean to some extent, so I could locate that image in a metaphor for my previous subjects, eg. Troy falling in his suite, Andrew Barr losing his Reindeer Herd in the wilderness but they still keep going at least in their dreams. As Tom Waits sings, you are "innocent when you dream."

Whether you're interested in seeing some of his features such as The Herd to his infamous Project Grizzly or would rather see his sought after short films such as Arrowhead and Animal Nightmares, the programme will be running through next week at the Cinematheque.

In celebration of the filmmaker and one of his most iconic works, Project Grizzly, Trinity Square Video will be hosting an exhibit called Grizzly Proof, featuring works inspired by the film. The exhibit will open tonight from 5-8 and will run until July 12th. Grizzly Proof features works by Canadian, American, French and Japanese artists inspired by the theme of humans-vs-nature and even includes Troy's original suit.

Images: A Short Film About Falling from RoboticChair

Someone just found Catherine O'Hara's 1969 yearbook photo and it's adorable