Luchetti's Only Child comes to Toronto

There are films I watch at the Toronto International Film Festival that I never expect to be released here in North America. Not because of their quality, mind you, but because they generally don't have the same kind of widespread appeal and marketing budget as, for example, a film like Indiana Jones.

Mio fratello è figlio unico (My Brother is an Only Child) was one of those films. Daniele Luchetti's film — which opened at Cannes in 2007 but had its North American premiere at TIFF last year — not only made my list of favorite films of the festival, but has been entertaining audiences in Europe since its release across the ocean a few months ago.

Now, it's coming to Toronto.

My Brother is an Only Child opens in Toronto on limited release tomorrow, June 6, and promises to entertain a wide range of audiences with its humor, drama, and incisive look at fascism and communism in Europe in the 1960s and 70s. 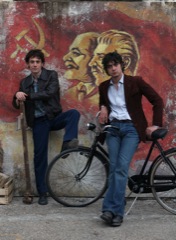 Very few people had the chance to catch Luchetti's film at TIFF last year, and this limited release is the perfect opportunity to catch this meticulously-crafted film for those of you that missed its screening in September. Along with the fantastic performances by the main characters, the film is reminiscent of some of the classic pieces of cinema from the era it portrays, and features a fantastic soundtrack including some of the greatest Italian hits of the 60s.

Luchetti might not be a household name for many of us here in Toronto, but mentioning My Brother is an Only Child's writers Sandro Petraglia and Stefano Rulli will surely raise a few eyebrows. The duo is responsible for one of the most acclaimed Italian films of the recent past, the 7-hour The Best of Youth. This time, Petraglia and Rulli manage to capture the narrative splendor and intense relationships of their previous film in a much shorter, more manageable screenplay, and Luchetti does well to translate their story into a visual tour de force.

To say that Mio fratello è figlio unico is highly recommended is an understatement. It won't be in Toronto theaters for long, so do make it a point to check it out in the next few weeks before it becomes yet another one of those excellent films that only gets seen by those on the festival circuit.