The 5th annual Ryerson University Film Festival (RUFF) — a weekend-long showcase of the thesis film projects by the graduating students of Ryerson's School of Image Arts — kicks off in two weeks, and if you haven't already made plans to be there, make sure you do now.

The films you see at the festival may end up being a piece of history: graduates of Ryerson's programme may just be the future big names in Canadian cinema.

One of the graduates from this year, Patrick Collins, will be screening his film Arthur Moore and the Lone Wolf. While I haven't yet seen the completed film just yet, the trailer is stunning:

Apart from being a promising filmmaker and a graduating student, Patrick also happens to be the head of working on advertising (with head of advertising Brad Dworkin) for RUFF, so I decided to ask him a few questions about his film, the festival, and the film programme at Ryerson.

What can we expect from the Ryerson University Film Festival this year?

This year, RUFF is going to be bigger and better than ever! Not just in terms of scale and advertising, but purely due to the sheer variety and scope of the approximately 25 films appearing this year. We have one of the most talented classes to pass through Ryerson Film Studies in a long time and the dedication and hard work shines brightly through each frame. The best part is that you will see films for everyone, not just the standard "film school" fare. We have epic adventure films, war stories, comedies set in the vast reaches of space, historical dramas, thrillers, family friendly films, music videos, documentaries and some of the best animated shorts I have seen in a long time.

There is a great deal of talent to be found this year at the festival, and I hope people take note not only of the fabulous writing, directing and cinematography, but also the meticulous work that went into art direction this year, in regards to costume and set design. I'm quite happy the festival is spread out over three days (May 8-10), as there is so much variety to see and behold it would be impossible to consume in one night. I know it seems clichÃ© to say this, but if you come to RUFF this year, you just may be seeing the future of filmmaking.

Tell us a little more about what to expect from Arthur Moore and the Lone Wolf. 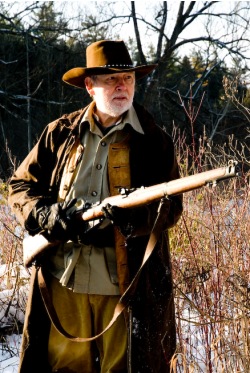 With Arthur Moore and the Lone Wolf, my intent was always to make a film that was hopefully, completely different from anything you would see at RUFF, or in a film school in general. I wanted to create an exciting and suspenseful crowd-pleaser that also told a dramatic story. For me, the best films are ones that can combine several genres into one, and that is what I think audiences should expect from "Arthur Moore and the Lone Wolf". First and foremost, the film is an action/adventure, but throughout it there are true moments of edge-of-your-seat suspense, followed by moments of comedy and action. Although it is a short film, I really feel that there is something in it for everyone.

The style of the storytelling is quite cinematic, which is only enhanced by the performances of the amazing actors involved. I think audiences will be drawn in by the subtlety and charm of both Arthur Moore and his companion, Mary Bertram (played respectively by John Henley and Farah Merani). They had such amazing chemistry from the start that our rehearsals seemed more like hanging out with close friends. They share a scene together at night by a fireside which subtly shows just how talented they are; even with all the action in the film, I think that's the scene I'm most looking forward to seeing on the big screen. As far as the action goes though, I think we've crafted a film with stylish action and suspense equivalent to any professional product out there. I've already received countless comments on the trailer regarding it having the same tone as an episode of the television show 'LOST'. It has been exciting to test the film with certain audiences and see them jump at the moments of suspense, so if I can make even a few people at RUFF jump in their seats then I have done my job.

I wanted to make sure that the story was always moving from place to place, we had so many beautiful locations; I wanted to be able to utilize them all. In the end, more than anything, I wanted to challenge myself with this film; could I pull off an 'epic' short film with the limited resources of a student filmmaker? I don't see the reason of making any film unless it will challenge me. On this film I served as Director, Co-Writer, Co-Producer and Co-Editor, and while the 5 days of production nearly killed me, I can scarcely think of another artistic endeavor I have been involved in throughout my life that I could be more proud of.

I may graduate from Ryerson officially in June, but seeing my film on the big screen at RUFF will be the true culmination of my efforts over the past four years.

What are your best memories from your time at the School of Image Arts?

My best memories from the school of Image Arts all have to do with camaraderie and friendship. We had some exciting classes of course and great guest speakers (most recently Jason Reitman), but it was the friendships (and hardships) that made everything worthwhile.

In first year we had to physically edit film in our 3rd floor labs. That meant splicing and taping, splicing and taping to the point where every film looked like a mound of scotch tape. But being able to chat with people from class you had just recently met is what made it fun and worthwhile, and even led to future collaborations.

In second year, we finally got to use the coveted editing suites with actual computers to edit on. Although each room was so small and hot it felt like Sean Connery's solitary confinement cell from "The Bridge on the River Kwai", there were very positive things about the overnight editing everyone partook in. Around 4am, we all became a bit delusional; this was of course after an entire 2L bottle of coke, a pack of Sour Patch Kids and a few Red Bulls. It still shocks me that most of the films didn't turn into psychotically fast-paced, caffeine induced videos resembling some sort of crazy film school anime. However, being able to roll into a friends' suite on your chair and have a quick chat always lightened the tension of a deadline or artistic block. Many times, if your film wasn't working, it was the help of a friend who gave you the criticism you needed to make it the best product possible. And somehow, seeing someone next to you struggling through the late hours and hard work with the same determination always seemed to make it worthwhile. Spending time in the editing suites is where you forge some of your best and most lasting friendships, and it doesn't hurt if you smuggled in a beer or two.

Lately, in fourth year, the experiences on set have been what brought everyone together. Whether it was overnight shoots, frigid temperatures, or constant equipment malfunctions, classmates were still willing to give up their time to help out, and I for one am thankful for that. A deep sense of camaraderie was apparent onset, and practical jokes and pranks helped to lighten the tension when it needed it most. On one particular set in which I was Assistant Director; I was given a megaphone at beginning of the first 18 hour day. I attempted to rally the crew to a hard working day with my own particular brand of comedy, but I think the decision to give me the megaphone was quickly regretted when I began my first of many celebrity impressions.

I still think I do a good Brando though.

I truly look back on each on-set experience fondly in a different way, all of us were there because we love film, and you need people like that.

Any tips on how to best experience RUFF this year?

The best way to experience RUFF this year is by starting as early as possible. We have a website coming online in the next week or so (I will forward you the link ASAP) that will have a synopsis, photos and trailers for each film. Also, I am currently shooting commercials for RUFF that will be available on the site as well as many others to promote the festival and showcase many of the students from the class.

Each night of the three night festival will be filled with a wide variety of films, so instead of just showing up for one night, people that want to see the entirety of the talent on display should purchase a weekend pass, (approximately $25), in order to get the best experience. If you are at all a film aficionado, or want to know more about the filmmakers, there are RUFF-hosted after-parties each night (locations to be confirmed) that anyone can attend, and we hope you do. Our films are made for our audiences, and we'd love to hear from you!

RUFF runs from May 8-10, 2008 at the Royal. For more information about the Ryerson University Film Festival, visit the website.

Photos: Stills from Arthur Moore and the Lone Wolf.