A new box office for the Toronto International Film Festival opened yesterday on King Street West just outside Roy Thompson Hall. The box office is under a big white tent on the North West corner, um, edge, of RTH. I was there yesterday and there were almost NO people at the box office, so it might be a good place to avoid lines. I did spot film-maker and TIFF volunteer Senthil Chidambaram (pictured above left) checking and rechecking the film show times to work in two films he didn't want to miss, Amal and Edge of Heaven.

Toronto's theatre scene countered TIFF with a blockbuster of it's own last night, perhaps the only production with enough star power to compete. Disney's High School Musical opened at the Princess of Wales Theatre (pictured above middle). In case you know nothing about this made-for-tv movie's success, you might want to pay attention; it's a massive threat to decent theatre and film for generations to come! Have you seen the numbers on this thing? It's second helping, High School Musical 2, had 17.2 million viewers on the Disney Channel (Family Channel in Canada), making it the most watched basic cable telecast in history! Check it out if you're kids, neighbors kids, nieces or nephews want a break from the silver screen.

And finally, road closure on John Street because of a "huge" TIFF concert announcement... John Street south of Queen Street West is closed as a stage (worker pictured top right and below) is being built in preparation for "one of the most-anticipated nights for fans and party-goers" (tee hee) this year at TIFF, Hilary Duff performing as part of eTalk Star! Schmooze and CTV and Much Music and Star! and... oh, I'm confused, almost every station seems involved. Show starts at 10PM on Friday.

Two TIFF related parties worth stopping by tonight include Young People Fucking at Wicked and Fugitive Pieces at the Gardiner Museum. 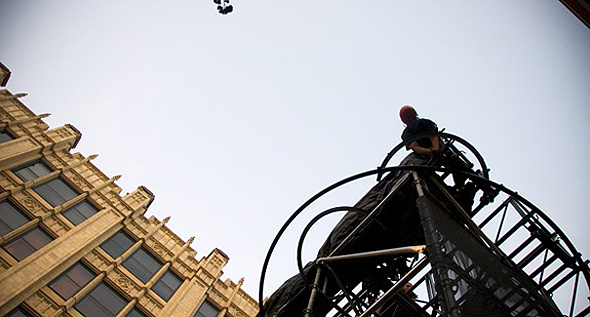