For a non-juried event, there sure are a whole lot of awards handed out at the Toronto International Film Festival. And while I appreciate the fact that TIFF may be one of the few festivals in the world that gets the public involved in the award selection process, I have to admit that the eventual winners don't always reflect the films that I believe should get the most recognition.

In light of this, I've decided to create the blogTO Toronto International Film Festival Most Awesome Awards (TIFF MAAs) which will highlight crowning achievements by people in the film industry — achievements that are often ignored by traditional award juries. Of course, I'll need your help to complete the list, so be sure to put your TIFF MAA winners in the comments below.

Oh, and if you're mentioned as one of the winners of a TIFF MAA, drop me an email and I'll send you a prize — a shiny blogTO button — over your way.

Without further ado, the TIFF MAAs:

Most Awesome Use of a Hammer
Lars von Trier does what we all have wanted to do at some point in our lives in his segment of Chacun son cinema. 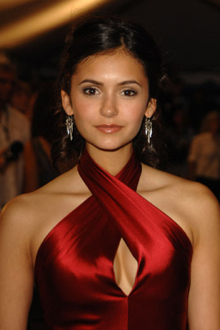 I almost didn't recognize Rupinder Nagra when I met him after he had shaved: such was the power of his beard in Amal.

Most Awesome Performance by a City in a Starring Role
In a three-way tie, this award goes to Sydney in Lawrence Johnston's Night, Halifax in Clement Virgo's Poor Boy's Game, and our beloved hometown Toronto in Ed Gass-Donnelly's This Beautiful City.

Most Awesomely Dressed Celeb on the Red Carpet
Eighteen-year-old Nina Dobrev made heads turn in her red dress on the red carpet for Fugitive Pieces, a far cry from what she looks like regularly on Degrassi.

Most Awesome Celebrity Cameo
George Stroumboulopoulos was on screen for about ten seconds in Bruce McDonald's The Tracey Fragments talking about teenage pussy.

Most Awesome Chess Game
Nobody needs skill when you can depend on deep concentration and the rumble of a train, as demonstrated in the chess game in Madame Tutli-Putli.

Most Awesome Marketing Campaign
Skinny and tall young men in tiny and tight yellow shorts were running around the city handing out orange Tic Tacs as a promotion for Jason Reitman's Juno.

Most Awesome Musical Number
A few tambourines and a two fast-talking Cubans are all you need to make a musical number work, as demonstrated in Chacun son cinema.

Most Awesome Ass-Kicking Sequence
You can always count on Wilson Yip to bring the pain, and he does that very deftly in Flash Point.

Most Awesomely Odd Bathing Suit
Gael Garcia Bernal's friend walks out of the room with a tight, package-revealing yellow speedo-like outfit before the pool party in Déficit.

Most Awesomely Creepy Bad Guy
If Javier Bardem's character in No Country for Old Men didn't give you nightmares for the next week, you have no soul.

That's all I've got for now. Do you have any TIFF MAA categories to add and awards to give? Let me know in the comments.