Rent an Indie Film and Help Feed the Hungry

Sure, torrents might be pretty convenient when it comes to watching DVD screener rips of Sicko, but it isn't easy to find the latest local indie flick on Mininova. For quality local entertainment like that you often have to turn to the local shops who stock these films for our benefit, and theirs too of course; money makes the world go 'round.

Money also helps feed the hungry. On July 7, both of 2Q Video's locations will be holding their first annual "Lucky 7 Feed the Hungry" fundraiser. Hit the jump for details on the fundraiser, and why I think 2Q deserves your money.

--
First things first; on July 7, 2Q Video will donate $1 from every $7 a customer spend towards buying rice for hungry families in Vietnam. Also, half of all outstanding late fees that are collected on the 7th will go towards the same cause. Bring home a couple of awesome movies, and be happy knowing you contributed at least a few bucks towards a good cause, one where every dollar counts.

The owners are also promising a literal red carpet to walk down, free snacks, free gifts, DVD prize packs, contests, etc etc etc. Their Bloor Street location is also having a party at 10:30 pm on the 7th. They 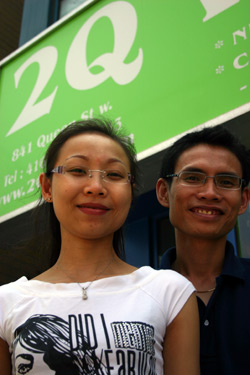 really want you to check out the fundraiser by the look of it.

But why go to 2Q otherwise? I have a Roger's card and the convenience of being able to hit any of their stores in the GTA, including the ones a few blocks from my house, is a convenience that I can't deny. But Rogers lacks in two specific areas; movie selection and a convenient online portal to check up on their collection.

Going through 2Q Video's website, it's damn easy to see what's in stock, what's new, as well as find a brief synopsis on the movies in their collection. Wanna rent "The Bridge", a movie where film crews taped the Golden Gate Bridge from various angles for a year straight, capturing many suicides on film (as well as preventing a few more), with interviews with family, friends, and witnesses? Tough luck at the Bloor location as it's out of stock and due back later today. It is available at the Queen Street location, though, so get a move on!

No lengthly loading screens, no buggy Flash that doesn't sync properly with whatever server is hooked up to their computers, just red "Out of Stock" or green "In Stock" text. I dare say it's better than awesome, it's gnarly.

Owners Tu Nguyen and Phuong Pham obviously know how to please their customers, as they've been operating their first shop since the late 90s. Competing with the Blockbusters of the world is no small feat, nevermind competing with our highspeed internet connections. Hadn't heard of them before this, but I wager I'll be on hand at some point on the 7th to check things out... maybe make a membership and take home some zany Spanish films with titles I can't pronounce and appealing cover art (re: hot people) that's too much to resist.