Can A Theatre Specializing in Documentaries Survive in Toronto?

Despite film-goers increasing appetite for documentary film, it remains almost as difficult to see them as it has ever been. The multiplexes still shy away from everything not starring big names like Al Gore and Michael Moore (and even those are in limited release) and except for rep cinemas, local film festivals and indie rental stores there aren't many options in Toronto to see the latest and greatest in documentary film.

Enter The Brunswick Theatre. Launched at the beginning of April, the smallish, student-oriented, make-shift theatre space has been trying to make a go of it but so far realizing only limited success. A few days ago they sent me a message on Facebook announcing that all screenings this week will be free.

Hoping this wasn't a sign of impending crisis I asked Brunswick Theatre founders Bre Walt and Scott Gilbert to fill me in on how things were going.

Keep reading for the full interview. 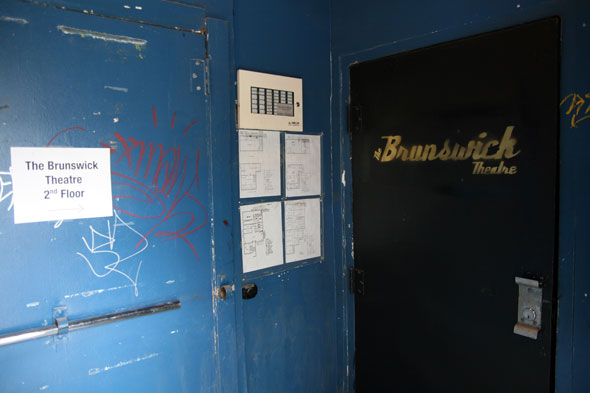 With the success of Michael Moore's films, An Inconvenient Truth and the continued growth of Hot Docs it would seem that documentary films have never been more popular. So how do you account for the lacklustre attendance at The Brunswick Theatre?

The major difference here is that Michael Moore, Al Gore, and HotDocs all have huge advertising budgets and their films generally have TV ads (particularly the first two). Most of our films never get major promotion so people see a title like American Blackout or The Damage Done and don't know what the film is about.

We are currently offering a week of free screenings so that we can fill our venue every
day and make everyone watch 5 or more trailers for upcoming films at our cinema. This has been very well received.

Has there been any learning so far about what gets people out to see films at the Brunswick? Do certain types of documentaries pull better?

Name recognition and controversy. For example, NO LOGO by Naomi Klein and THE GOD DELUSION by Richard Dawkins have by far had the largest draw. These are certain good films, but by no means our best. People come because they have heard about the book the respective film is based on and want to see the author's summary with added footage.

Secondly, anything that is controversial. Again the God Delusion comes to mind, but also others like CIA Covert Operations: The War Against The Third World. What we have learned is that you must market the films as controversial or having interviewees with big names in order to draw a crowd. For example, we market the film Deliver Us From Evil by putting up posters that say "Vatican Sex Crimes" on it in huge letters, and fill in the rest of the poster with the movie info. 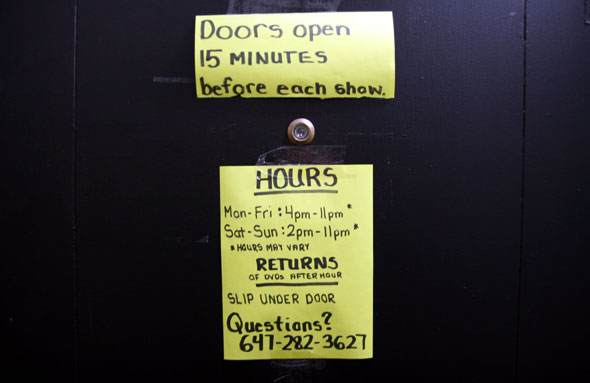 What's the cost structure like? Do you have paid staff or is it volunteer run? Are you guys a non-profit? How many seats do you have to fill to cover the cost of screening a film? What's been your attendance to date?

Best attendances for any one film are for the God Delusion with Richard Dawkins. Best attended single event was when Naomi Klein came to speak about Barrick Gold. We usually charge $10 per person at the door for any single film. However, we are offering much better rates for long term support, as follows:

For a minimum 6 month membership, billed monthly, you get:

In general, we need to bring in about $300 per day to meet all of our overheads (rent, taxes, utilities, screening rights, promotion, debt repayment, etc). This is before we pay ourselves a wage. We have not been getting paid so far, and are in fact subsidizing the cinema every month.

This is why we are doing a blitz of free screenings to build our long term membership base so that we can spend more time working on developing our cinema and less time putting up posters that get taking down or covered up within hours. Our attendance to date has been all over the place - depends on weather, other events in the city, how much promotion there has been, and the film itself.

What's a typical experience like at the Brunswick? How many people does it hold? What's the quality of the seats and equipment?

We are not like the major cinemas. I would say we are somewhere in between the Bloor Cinema and the Cineforum. We have a policy that nobody will be refused for lack of funds, and we offer 50/50 split options for small, underfunded and independent groups trying to get going.

Our cinema is unique because we block off at least 30 minutes after each film for a facilitated discussion. Our films are powerful, controversial and on issues that have many ramifications. Our patrons sometimes come just for the discussion period because it can be so interesting. Our seating capacity is 100, with a standing capacity of 144. We have a 132 inch screen (roughly 10 feet by 8 feet), a 400W sound system, 8 speakers, and a 3000 lumen projector.

Our picture and sound quality equipment are overkill for the size of the space. Our chairs are not fixed to the floor, have a thick layer or padding, and arm rests. We made sure to get good chairs, and not have them fixed to the floor. This way everyone gets 2 arm rests! We also have couches that we bring it from time to time. People always love the real home theatre experience. 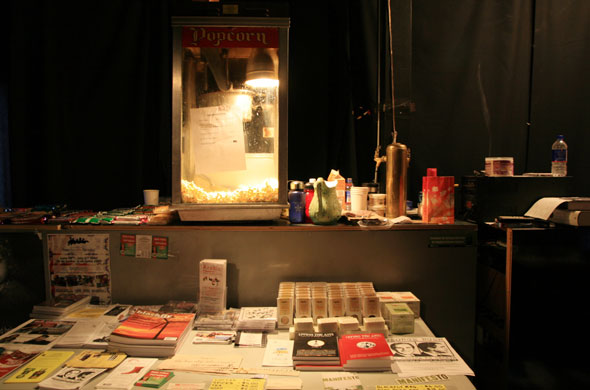 Do you expect free tickets will get people out to see the films? Is price the major factor holding audiences back?

We do not feel that price is the major factor - not knowing what the films are about is. We are the only place in the city to get these films - the big cinemas won't show them and major chains like Blockbuster don't carry them either (probably because the content will piss off major advertisers). If people want to see these films they would have to buy the DVD for $30 plus shipping and handling. Paying $10 to see it on the big screen, or $5 to rent it is actually a good deal.

The major problem is that people don't know what the film is about so that's why we're offering a week of free screenings to get people through the door and make them watch trailers. Every day we play 5 or more new trailers so they can get an idea of what we do overall. Then we give the membership pitch. It has been fairly successful so far. 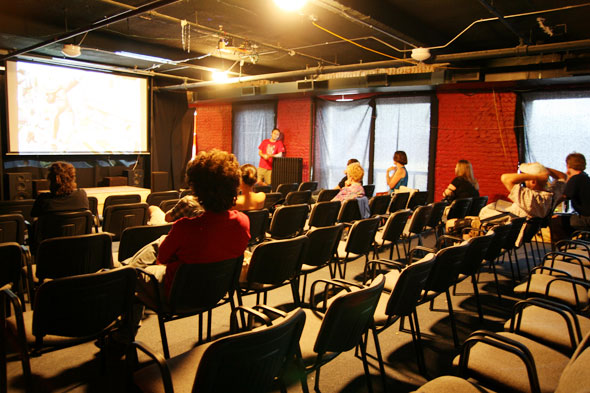 Do you think there's a place for a theatre focused exclusively on documentaries in Toronto?

Absolutely. There is in most cities. We were doing this in Guelph for several years on the university campus and getting 50 - 100 people per screening, while doing a show every 2 days or so. They were free in Guelph, but Toronto has 50 times the number of people. We know this can be a huge success, but we just need to find good way of reaching people beyond postering. That's why we're very grateful to organizations such as BlogTO that give us a chance to express ourselves to the greater Toronto area.

Beyond just documentaries we rent the space for a range of other purposes. Our main interest is in film, but we host speakers, debates, panel discussions, and rent the space for everything from stand up comedy to art shows to conferences. We really want this space to be seen more as a multi-use community centre than a commercial cinema.

The Brunswick Theatre is located in the old Poor Alex Theatre at 296 Brunswick Avenue, just south of Bloor.