Almodovar and His Hollywood Divas

Pedro Almodóvar's Volver — which was met quite enthusiastically by crowds at the Toronto International Film Festival last year — was just another notch on the internationally acclaimed Spanish filmmaker's belt. Having directed some of the most talked-about films of the decade, Almodóvar's cinematic deftness has brought him critical acclaim but also intense scrutiny: his movies often pit him against conservative critics in his home country because of their tendency to question the 'Spanish identity'.

Of course, what Almodóvar is best known for is the portrayal of women — most often the protagonists and central characters of his films — in each of his cinematic masterpieces (and even some of his duds). Having worked with stars such as Penelope Cruz in Volver and All About My Mother and Marisa Paredes in The Flower of My Secret and again in All About My Mother, Almodóvar has infused his playful aesthetic with powerful female roles.

Beginning this Friday, Cinematheque Ontario is presenting a showcase of Almodóvar's films coupled with films that have inspired his work, in their new programme Bricolage and the Divas: Almodóvar Meets Hollywood's Golden Age. The programme will let cineastes in Toronto explore the connection between the Spanish director's women characters and Hollywood's legendary divas. 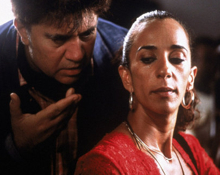 Bricolage and the Divas is a ten-day programme comprised of double bills picked by Almodóvar himself. And while the legendary Hollywood films are not direct inspirations for the Spanish director's movies that accompany them in each double feature, it is clear that Almodóvar has unapologetically repurposed films such as All About Eve and Rich and Famous in the ways that he crafts his often surreal tales centered around beautiful and strong leading ladies.

Almodóvar's symbiotic relationship with American cinema functions largely through his appropriation of great female performance. He has molded many of this generation's boldest international stars: Carmen Maura, Marisa Paredes, Cecilia Roth, Penélope Cruz, Rossy de Palma, Chus Lampreave . . . the list goes on. They have become some of cinema's greatest divas by channeling and making contemporary the pain, suffering, and will to overcome heartbreak that first animated the very idea of cinematic melodrama.

For many film fans in Toronto, the Bricolage and the Divas programme will not only present an opportunity to see Almodóvar classics such as Labyrinth of Passion and Women on the Verge of a Nervous Breakdown on the big screen again, but also to see stars like Joan Crawford and Gregory Peck light up the cinema in Johnny Guitar and Duel in the Sun respectively. To say that I highly recommend any one of these films is an understatement: I consider them a necessary part of any movie enthusiast's repertoire.