Don't miss the one day event running Saturday March 17. (From left to right: S11, The Art of Flirting, The High Cost of Living)

Could the tiny island-state of Singapore be the mecca for the next big Asian cinema wave since South Korea? With its mandate to showcase some of the country's best and burgeoning talent, the 2nd annual Toronto Singapore Film Festival will be premiering 5 shorts and 3 features this Saturday at Innis Town Hall.

A huge success last year, the programming for this year's fest looks even stronger and more diverse. Covering a broad range of genres and subjects, it's sure to satisfy cinephiles and pique the curiosity of anyone up for a glimpse at the little-known industry that's destined for bigger things to come.

To whet your appetite, I managed to review all 3 features -- all of which are making their North American premieres:

S11
Written and Directed by Gilbert Chan and Joshua Chiang 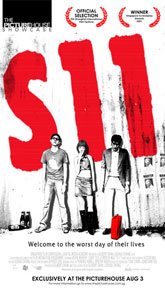 Sure, the device of interconnected storylines and fragmented timelines (a la Tarantino) has been done to death. And as gimmicky as it can be -- especially in the wrong hands -- the device itself rarely fails to hook me even if the sum of its parts don't always add up. Yeah, I'm a sucker for movies that invite me to figure out how its pieces connect. What needs to be said for S11, however, in spite of being a straight-up, unabashed homage to Pulp Fiction and Amores perrors, is that for all its derivativeness it makes up for with loads of infectious charm and cleverness.

What also makes S11 a step up from all the gimmickry are the oddly affecting characters: a disenchanted jewel shop clerk (who has a striking resemblance to Wong Kar-Wai's favourite actor Tony Leung), a geeky daydreamer, and a sexy pink-hair chick who sells blackmarket pornography. Then of course the oddball motif that links these disparate characters and their individual storylines together: Doraemon -- the ubiquitous blue robot cat that's virtually unmissable if you've ever walked through Dundas and Spadina (and usually right next to the Hello Kitty merchandise). Nonetheless, with all these winking film-geek elements connecting the parts, somehow directors Gilbert Chan and Joshua Chiang manage to make it work. They seem to know how to pitch the humour just right, and even when you think all these things can't possibly work, the genre-savvy writing keeps it all afloat.

My favourite scene from S11 (NSFW)

The Art of Flirting
Written, Produced and Directed by Kan Lume 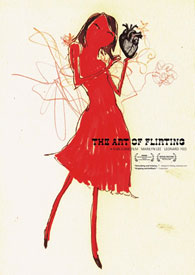 Think Richard Linklater's Before Sunrise and Before Sunset sans the highbrow meandering. Sweet and sorrowful, The Art of Flirting starts off so gushingly warm and as harmless as an episode of Blind Date to something that's as quietly devastating as anything I've seen in awhile.

We open with the obligatory meet-cute of Lin and Leo, both attractive and in their mid-late twenties. As they survive the pains and awkwardness of getting to know one another, their courtship begins to deepen to the point where they openly unravel themselves, sharing and exposing their innermost thoughts and haunted regrets.

Shot in a shaky voyeur-cam style, the film plays out in an improvisational manner, having the look and feel of a Cassavetes or a Dogme film. We are mere observers, carried along by the simple narrative of the expanding relationship, which keeps us close and intimate. Thus, not only do we get the gooey tenderness but the slight stings and discomforts that being in a new relationship often feels like. So by the end, the aches are just as real and, for a short while, hard to shake off. 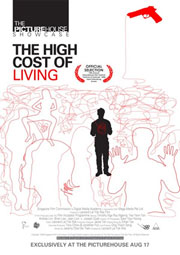 Simple Spy Versus Spy formula for your basic cop action flick: a morally conflicted contract killer pursued by a dirty cop in a deadly game of cat and mouse. Yup, we got that here. Now let's complicate things a bit by dropping in a few more characters like a love interest, a sad desperate housewife, a hedonistic best friend, a vicious mob boss and his brooding gangster son. Spin a plot with wild improbabilities and clever coincidences, and you got yourself something very entertaining, and that's what The High Cost of Living is all about.

Gid, the reluctant contract killer, is at the point in his career where he feels like a change of scenery might be for the best. But after completing his final job, he finds himself the hunted target of an obsessed cop, Long, who also happens to be dealing with some major marital issues. Gid, on the other hand, is also dealing with matters of the heart when he falls in love with Lily, but just can't seem to commit himself fully. Not even his best friend, Aloysius, knows about his people-killing gigs. Then when Aloysius (oh, that Aloysius) humps and dumps a girl, whose father just so happens to have mob connections, well, needless to say there's going to be trouble. All this leads up to a wildly contrived climax, but played out so well and with earnest conviction that my suspension of disbelief would've nearly collapsed if it weren't so deliciously fun and neatly executed.