An Evening with Ken Loach

Having just seen Ken Loach's powerful and stark drama The Wind That Shakes the Barley (with the prolific director in attendance and as part of the Human Rights Watch International Film Festival running this month at the Cinematheque), I can understand -- though not necessarily agree with -- some of the harsh criticism it's been getting ever since it won the Palme d'Or at Cannes last year. The film about two brothers who join the Irish Republican Army in the 1920's got some of the most vicious critical lashings from political pundit Tim Luckhurst of Times (a British magazine), who fervently called it a "poisonously anti-British corruption of the history of the war of Irish independence". Ouch.

The film does without a doubt depict some of the most savage and perhaps historically questionable war torture since maybe The Deer Hunter (lauded by some but hated by others for its one-sided treatment of the Vietnam War). But does this inaccuracy weaken or destroy the film's overall merits? Does it -- as suggested by Luckhurst -- fail to convey even an "iota of realism", and is nothing more than just pop entertainment disguised as social relevance? Alas, it's an endless debate, and one that unfairly sets up expectations for cinema as some kind of infallible representative of truth, but especially unfair when "truth" is difficult to understand within the context of war, in which no side is ever absolutely good or evil. But then again, what do I know, I have never fought in a war and I reckon neither have many film critics.

Artistically, on the other hand, I feel that 'Barley' fails to leave much of if any haunting residue despite its tragic, downbeat ending. Because Loach favours a disconnecting technique of filling master shots with abundant amounts of action and information while eschewing readable reaction shots, emphasizes socialist detachment over inner characterization. Consequently, the characters don't seem to have interesting personal lives that we can easily relate to. But this "master" technique Loach has been developing with his recent work since Sweet Sixteen (or perhaps earlier with his television work) is noted by some critics as the most mature and refined aspect of his craft. I must admit, however, I miss the polished -- maybe too perfect -- qualities of Bread and Roses (a personal favourite), which somehow manages to balance the two thematic polarities of the personal and the political with extraordinary skill and confidence. Nonetheless, I wouldn't say 'Barley' fails as a whole, on the contrary, I believe it's Loach's most lavish and artistically rich work to date with sequences that are truly gripping and sustained, while it still retains the unmistakable, naturalistic style that has become the hallmark of his filmmaking. 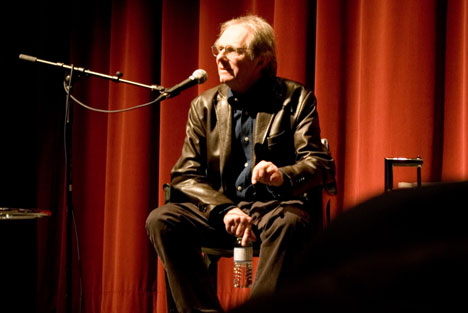 After the screening, Loach came on stage to do an interview with The Arts Tonight host Eleanor Wachtel. When asked about his political beliefs, Loach cringed at the mention of his reputation for being a Leftest (I assume he felt uncomfortable with the label's extremist connotations), and stated that his views chiefly took form during the 80's Thatcher era, a period of social and political disillusionment. One of the less thorny moments of the night came when Wachtel asked about the transition between his working class upbringing to his elite Oxford education: "I just did well on the tests," Loach downplayed. Loach discovered his passion for Theater at the prestigious university, which, in a moment of sad reflection, said it "gutted" his father, who had always hoped his son would become a lawyer, a career he had always wanted for himself.

The audience Q&A that followed was also lively and, for the most part, rather earnest. One curious moment came when a gentlemen from the audience told Loach that he was actually "being soft" on the Brits. A comment that initially sounded like a vexatious critique gradually turned into some sort of compliment. Loach was amused, if not a little confused like everyone else. Overall, the questions were a good a balance between political debate and insights on artistic processes. The evening did not disappoint.

The Cinematheque will be running a Ken Loach retrospective starting later this month. Check the Programme for more information.