A question I got asked a lot when I was a kid: "So, you know Karate?" My oft reply was: "Yeah, of course". Then, over time it turned into something like: "Yeah, no, not really... but my dad does..." My eyes were always little too shifty, and eventually "some" of the kids were on to me. It was then I realized what my biggest regret was: I shoud've learned Karate. I was upset at myself for not being born with it. I mean with all those Bruce Lee flicks my dad consumed, Kung-Fu-Jitsu-Ninja-Star/Whatever should've got encoded into his sperm or something! It should be in my DNA. Alas, I was just a regular Asian Guy, unqualified for the "Bruce Lee" label and got stuck with the "Long Duk Dong" badge instead. And, well, I can't fully blame John Hughes for all the things that made my growing up in the 80's awkward and difficult, I'm not too sure I'm willing to forgive him either.

The Sixteen Candles stigma was like a Scarlet Letter for many Asians who grew up in North America, and it's one of the topics explored in the new doc The Slanted Screen: Asian Men in Film & Television. It begins with a tribute to Sessue Hayakawa, best known for The Bridge on the River Kwai for which he was the first Japanese nominated for a Best Supporting Oscar. But during the Hollywood Silent era, Hayakawa was actually a leading man, whose roles often allowed him to to charm and romance white women with the kind of suave sophistication that certainly would've made Cary Grant green with envy. Hayakawa was a bona fide American sex symbol despite being a minority. And yet the most curious fact was that interracial couplings on screen was just as casual as it was innocuous, which further illustrates a point about the xenophobia that currently exists in Hollywood.

The turning point came when Hollywood began making war films, and everything non-American was considered "the enemy" or unpatriotic. Yellowface (whites playing Asian) soon appeared, like Charlie Chan and Fu-Manchu, and the portrayal of Asian men gradually got reduced to that of evil or gawky Chinamen, who should never be trusted... and consequently the white women were no longer interested. Yeah, but who could blame them? Asian men, we were lead to believe, could care less about sex, they were too preoccupied with things like magic and Kung-Fu.

While Yellowface reached its most offensive heights in Breakfast at Tiffany's, many Asian-American actors struggled in the industry, often relegated to minor bit-parts that were demeaning and unflattering. But things changed when a young, charismatic phenom and future cult icon emerged. Bruce Lee single-handily shifted the paradigm of American cinema. Not only did he reinvent a film genre, he created a new popular image of the Asian man, one with virility and impossible physical abilities. Lee's characters were cold, violent, and a bit mysterious, but undeniably alluring. When he wasn't swinging nunchucks or beating up a hundred guys at once, he also made time for some quasi-Confucius teachings. He was smart and deadly, and women sorta like that. But while Lee opened the doors for many Asian action stars, the substantial dramatic roles were still largely out of reach, and some even saw Lee's influence as the cause of this because it manifested a set of new stereotypes.

From Sessue Hayakawa to Bruce Lee, director Jeff Adachi does an impressive job of squeezing a hundred years of cinema into a swift but dense 60-minute history lesson; culminating with the emergence of the New Wave headed by Wayne Wang (The Joy Luck Club) and highlighting the recent crop of young auteurs like Justin Lin (Better Luck Tomorrow), Gene Cajayon (The Debut), and Eric Byler (Charlotte Sometimes). Recognizable actors Mako (Memoirs of a Geisha), Jason Scott Lee (Dragon: The Bruce Lee Story), Tzi Ma (Rush Hour), and Bobby Lee (Mad TV) and others also lend their insights on the topic. Tied together with a plethora of movie clips, Slanted Screen argues its points with piquant intelligence while inspiring a genuine sense of optimism for the future. The sentiment I believe is: that change is already taking place, and with the current success of Asian-American Cinema, it should just be a matter of time before Hollywood takes notice. 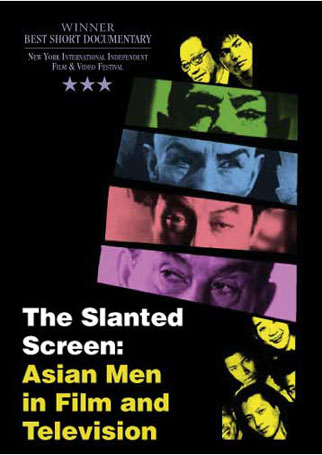