Meet the beloved seamstress who's hidden inside a Toronto laundromat

A booth in the corner of a laundromat in Leslieville is home to Toronto's most beloved seamstress, who's been in business for over a decade.

Queenie Xia Liu, known as just "Queenie" to her customers, has grown to become somewhat of a celebrity in the neighbourhood.

Since 2009, everyone from all different ages and backgrounds, come to visit Queenie's booth inside of Quick Clean Laundry Centre, located near Queen and Pape.

When customers arrive, you hear them exclaim "Hi Queenie!" or "Hi Mama!" with an expression of joy in their eyes, as if they were greeting an old friend.

Queenie is just as excited to see her customers, "they've become my friends, they're like my family," she says, while carefully inspecting each clothing item her customers bring. 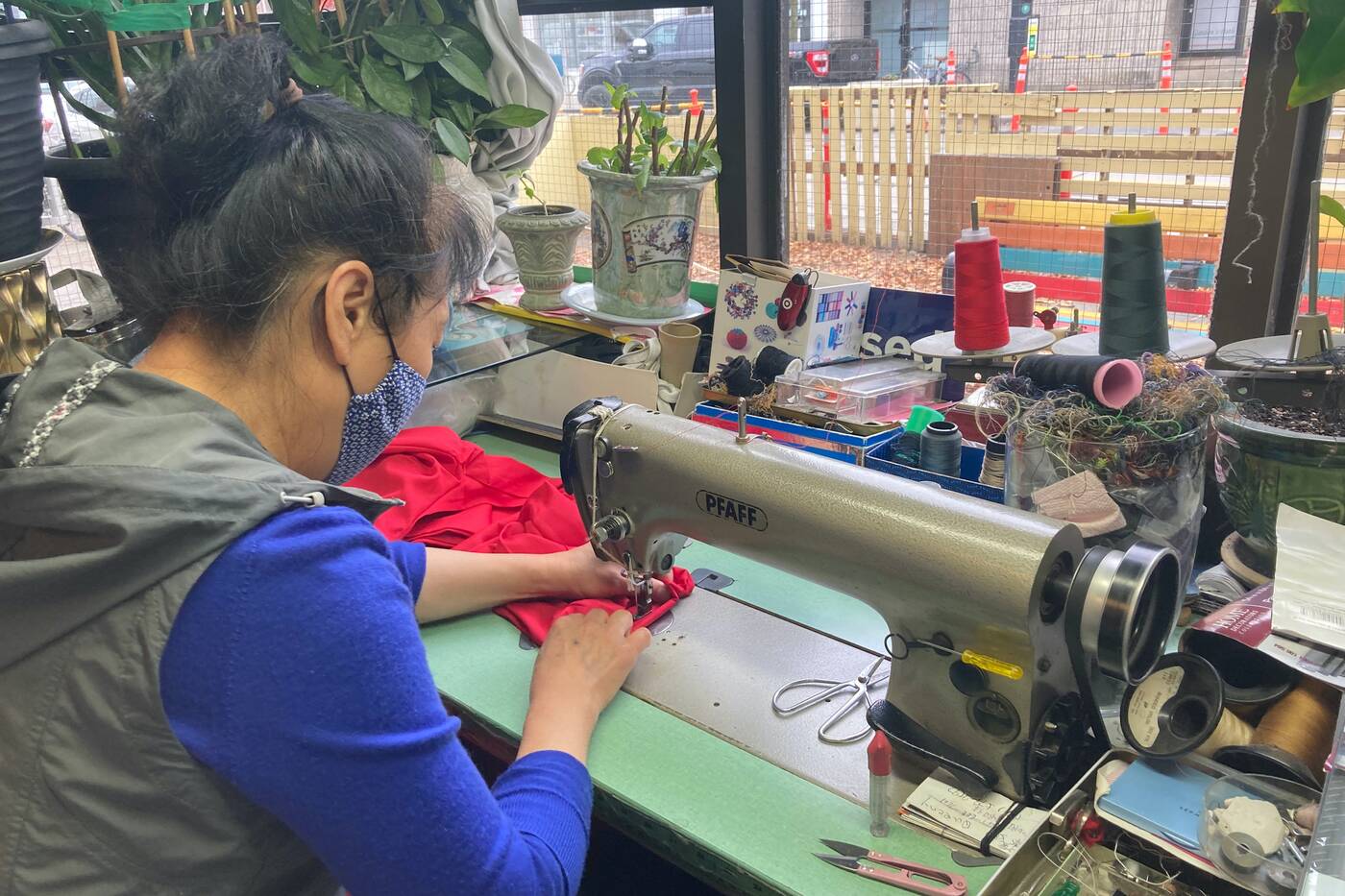 Queenie sewing a customer's dress shirt inside of her booth at the laundromat.

Queenie says she had no idea how to sew or work with clothes when she immigrated to Canada from China in 1997.

Her first job here was in Scarborough at a curtain company, where the owner taught her how to sew and create curtains from scratch.

From there, she went on to have her own business, making curtains out of her home in the day time, and attending English classes in the evening.

After that, she worked at a dry cleaning business that used to be at Queen and Parliament, this is where she started doing clothing alterations, while also making pillow cases, and curtains.

Queenie only stuck around there for three years, before moving over to Quick Clean Laundry Centre, making it a permanent home for her business.

"Even though it's a small space, I'm so happy here, I can be independent, work on my own, do my own thing," said Queenie.

You can find the seamstress working six days a week, her booth sits in front of a window that faces the main street.

"Sometimes I will be concentrating so much, then people come knocking on the window to say hello, and I have a big smile on my face," said Queenie. 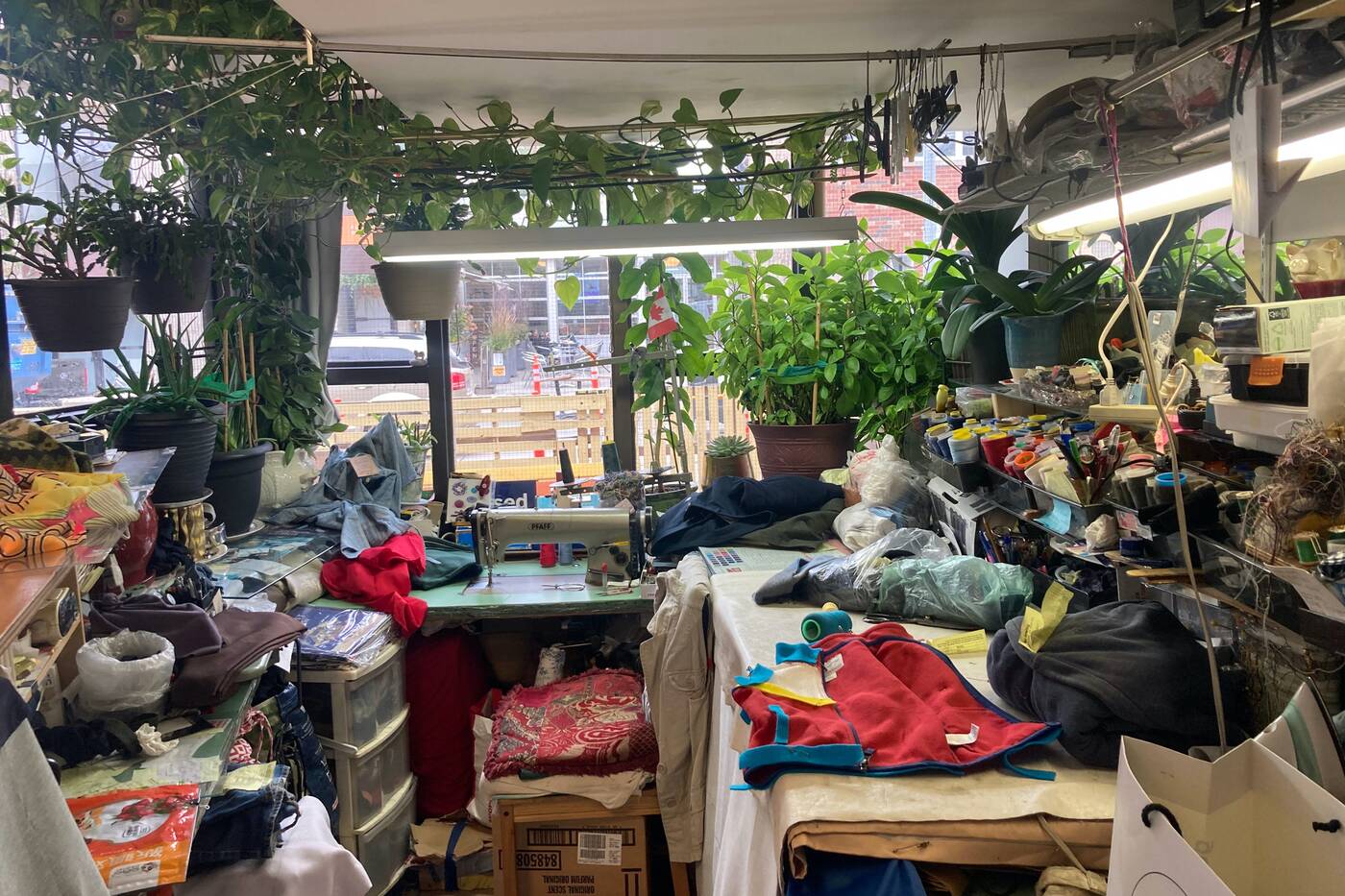 The inside of the booth that Queenie has been working in for the last twelve years.

The booth that Queenie works in acts a testament of the last twelve years she's spent there. Written notes are dotted around, along with rolls of thread, a spread of sewing needles, and several plants hanging from the ceiling.

Although it may seem chaotic to outsiders, Queenie knows exactly where everything is, at all times.

Hidden underneath a plastic case, is a written list that Queenie collects, showing all the names and numbers of her regulars, so she can keep track of everybody.

Queenie takes a lot of pride in her business, although she works for long hours sometimes, she always makes time to exercise for two hours when she gets home at night.

She says doing yoga and swimming, helps her to keep her back strong, for the hours she works hunched over at a sewing machine.

You'll never hear Queenie complaining about her job. She says because of the joy her customers bring her, the days she spends at the laundromat hardly ever feel like work.