A passion project to create a cabinet out of a piano led a Toronto woodworker to learn more about the history of his neighbourhood and how pianos were once made by hand in the city.

Chris O'Dell of Woodchip, a Junction woodworking and design company, had an idea to create a cabinet out of an old piano about five years ago but it wasn't until this year that he had time and the instrument.

"This was always a passion project that I wanted to do but getting a hold of a 1,000 pound piano wasn't easy," O'Dell tells blogTO. 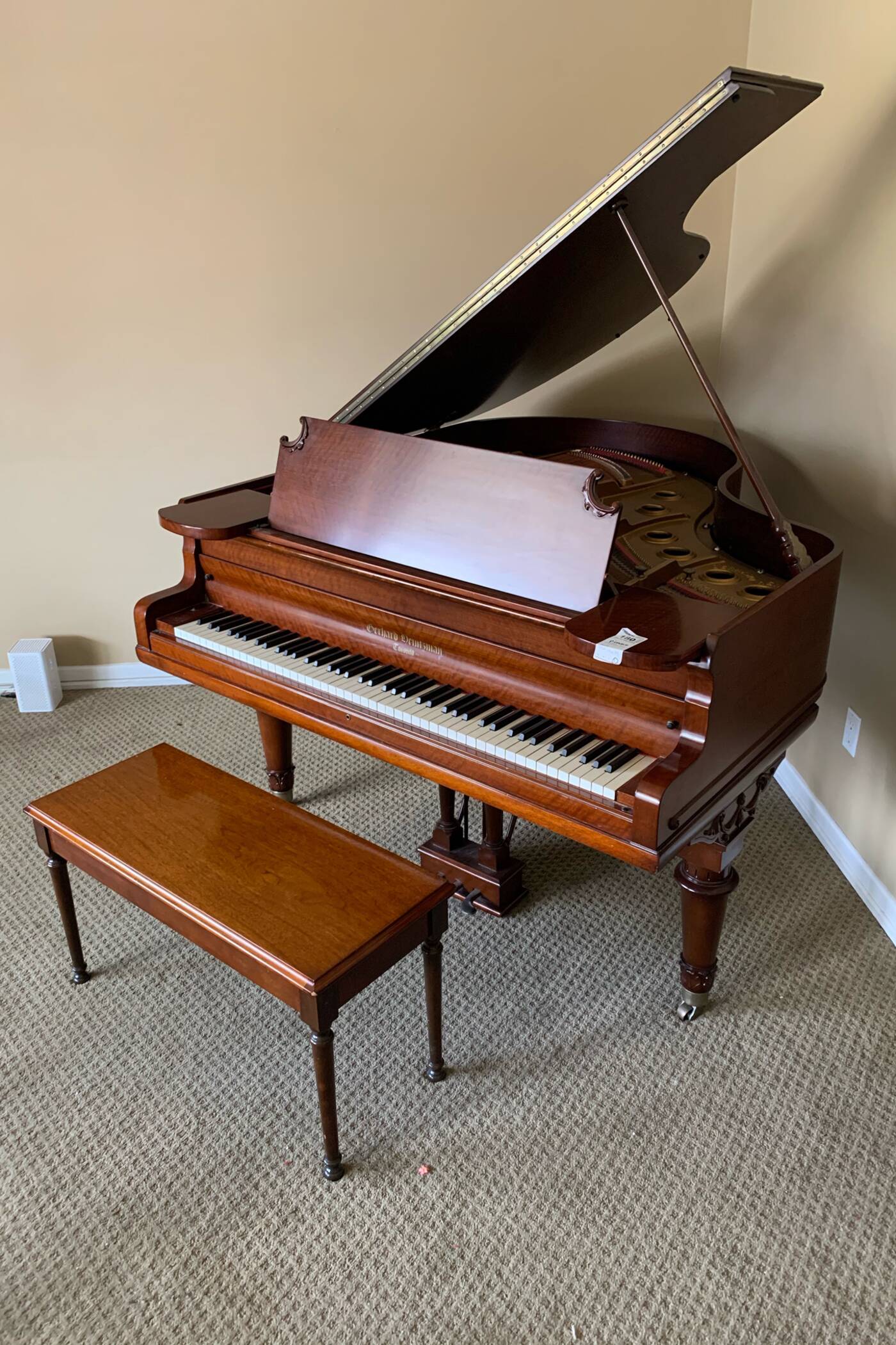 The piano O'Dell bought had a cracked harp so it couldn't be tuned.

During the lockdown his business slowed and he had more time to think about it. O'Dell says he knew very little about pianos but thought creating a hanging liquor cabinet sounded intriguing.

There are other piano cabinets out there, but most keep the piano on the ground.

O'Dell found the piano at an estate auction in May by chance. He was looking for furniture for his home and saw the piano. 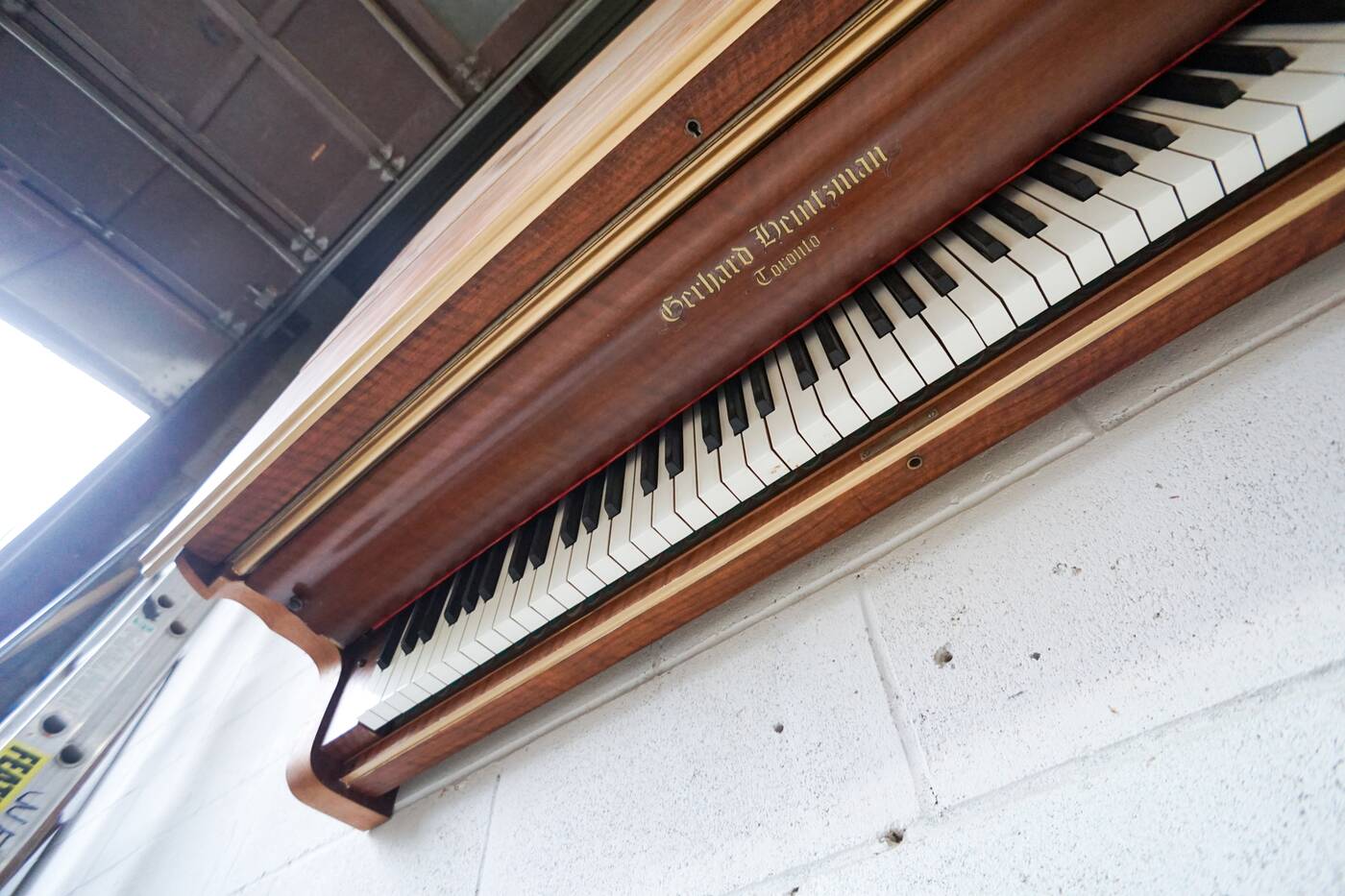 The name of the piano maker is inscribed on the keyboard cover.

The piano had the words "Gerhard Heintzman, Toronto" written on the keyboard cover. While taking it apart, O'Dell found a five-digit number stamped into the wood.

"It's basically a serial number."

The number enabled him to do more research and he discovered the piano was built in Toronto in 1885 in either the Heintzman Queen Street location, which is now the Bay downtown, or the King Street location, or a Junction location near Keele and Dundas.

That factory remained, dilapidated, until it was replaced by condos. A street is named Heintzman in the piano maker's honour. 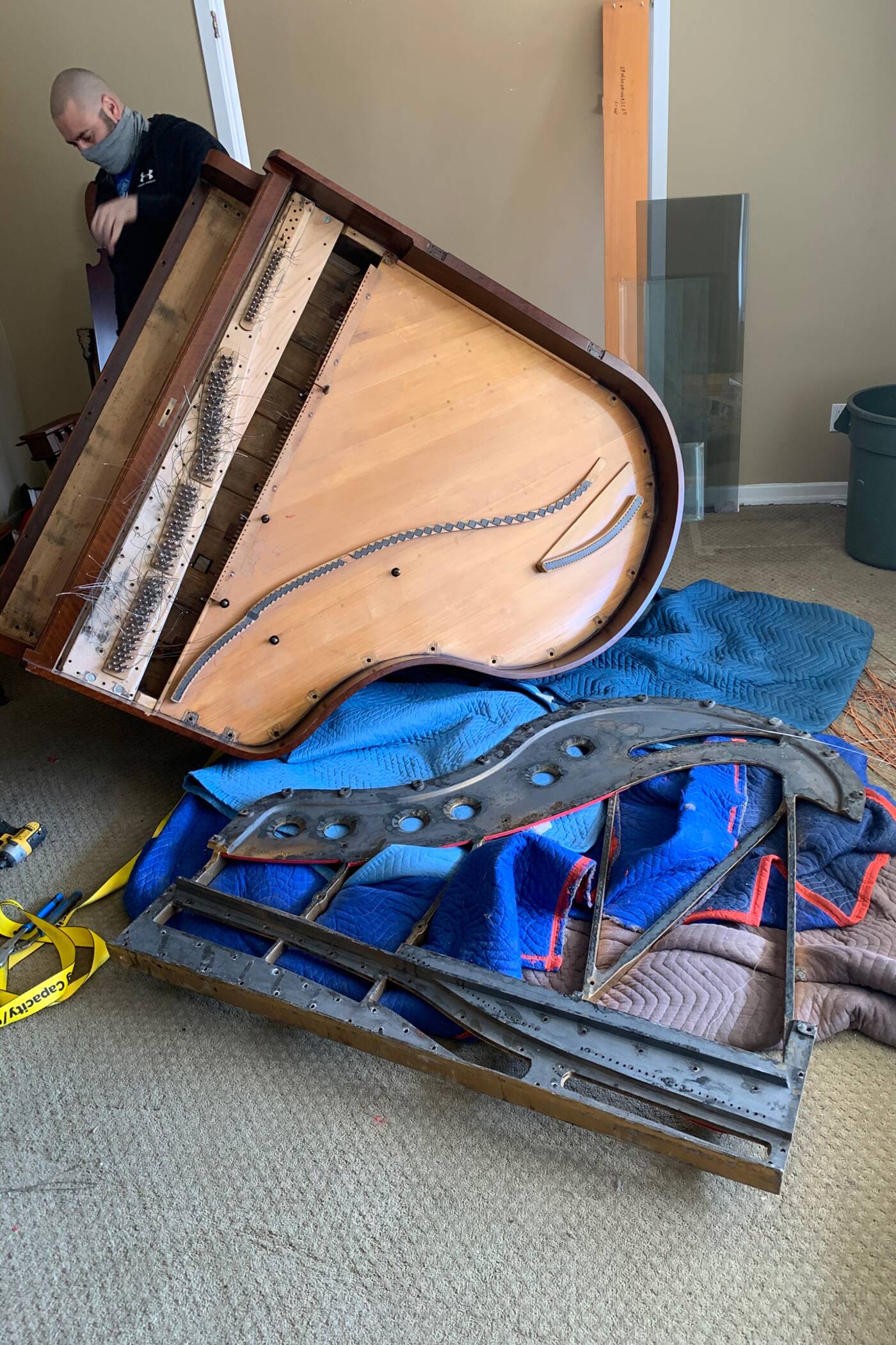 Inside the piano, there is a metal harp, which O'Dell plans to make into a coffee table.

"The amount that I have been able to learn about, the neighbourhood I love, and the piano industry, on the whole, is great," O'Dell says.

Building a piano in those days was hard work. Just the keyboard alone, which O'Dell estimates has over 800 pieces, would have taken a long time to make.

"Those pieces were built by hand – there were no machines doing this." 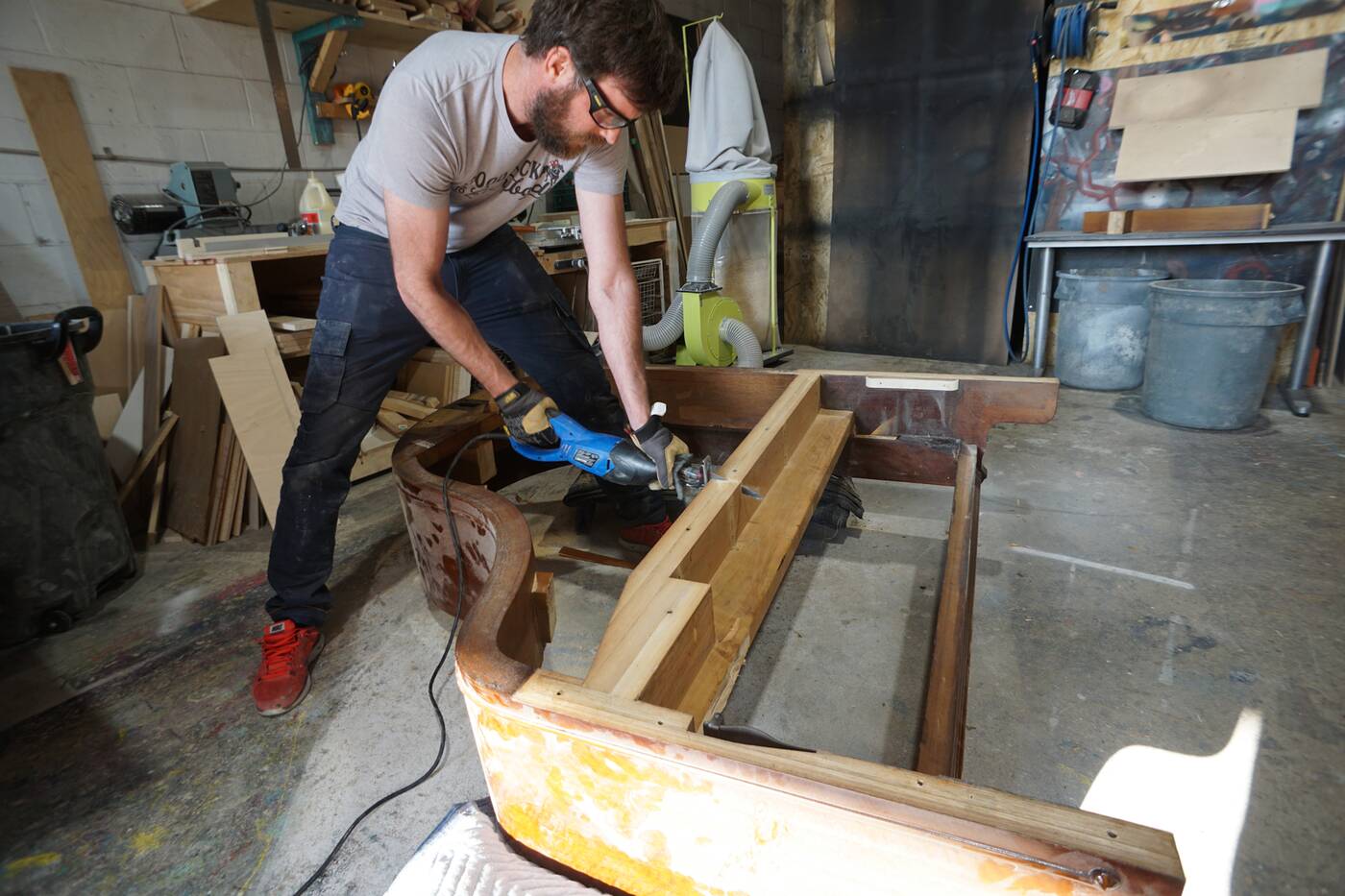 The metal harp would have been lowered into a piano with ropes and horses.

"For me, it was a warm feeling to know this thing that I am doing was built by these guys (in Toronto) so long ago." 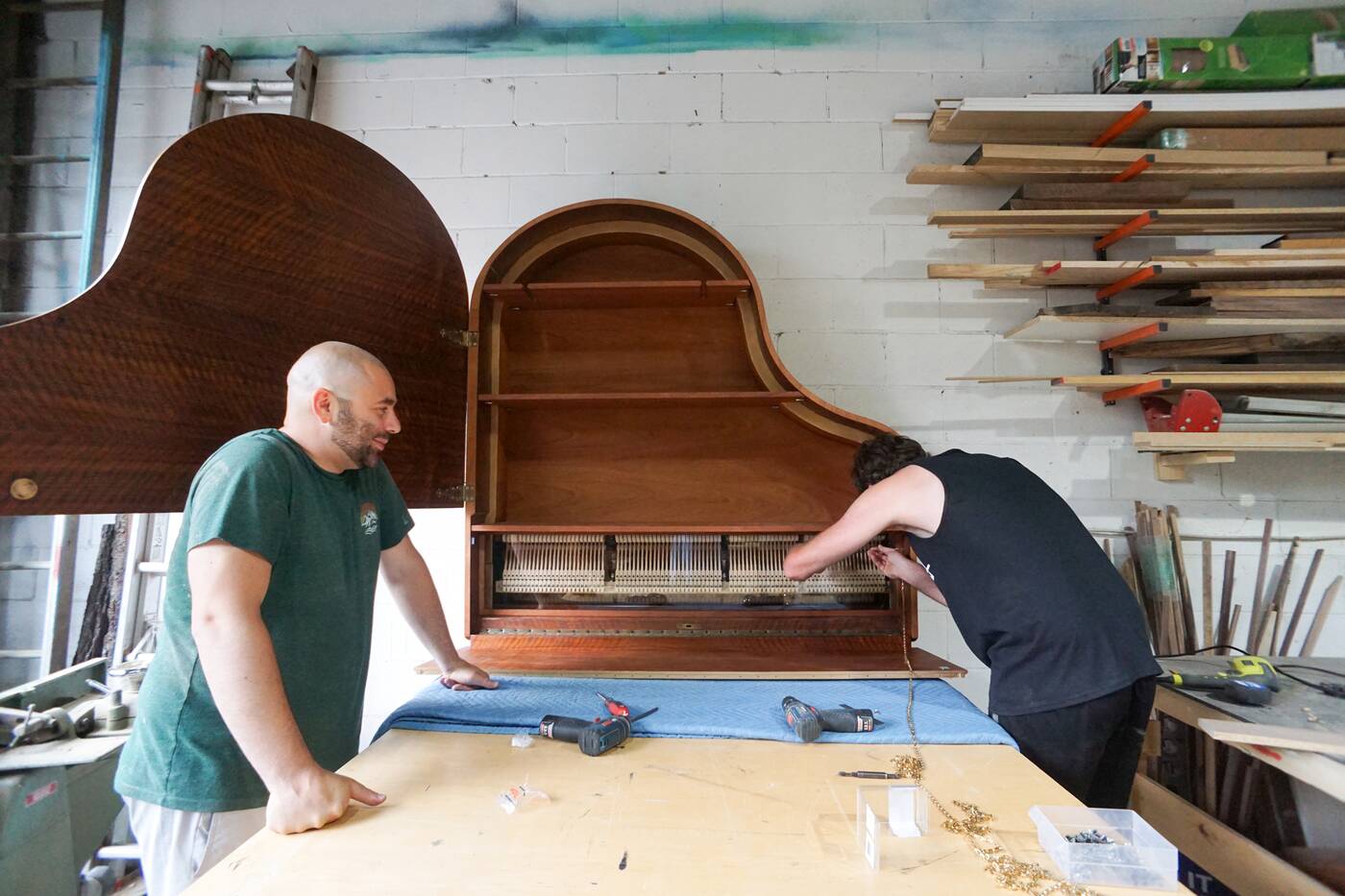 There was a lot of painstaking work in creating the cabinet.

The Mississauga man who owned the piano had it for 20 years and he had it shipped into Canada from somewhere but the details of the history aren't clear, says O'Dell.

The piano was broken – the huge cast iron plate, called the harp, was cracked and couldn't be tuned. 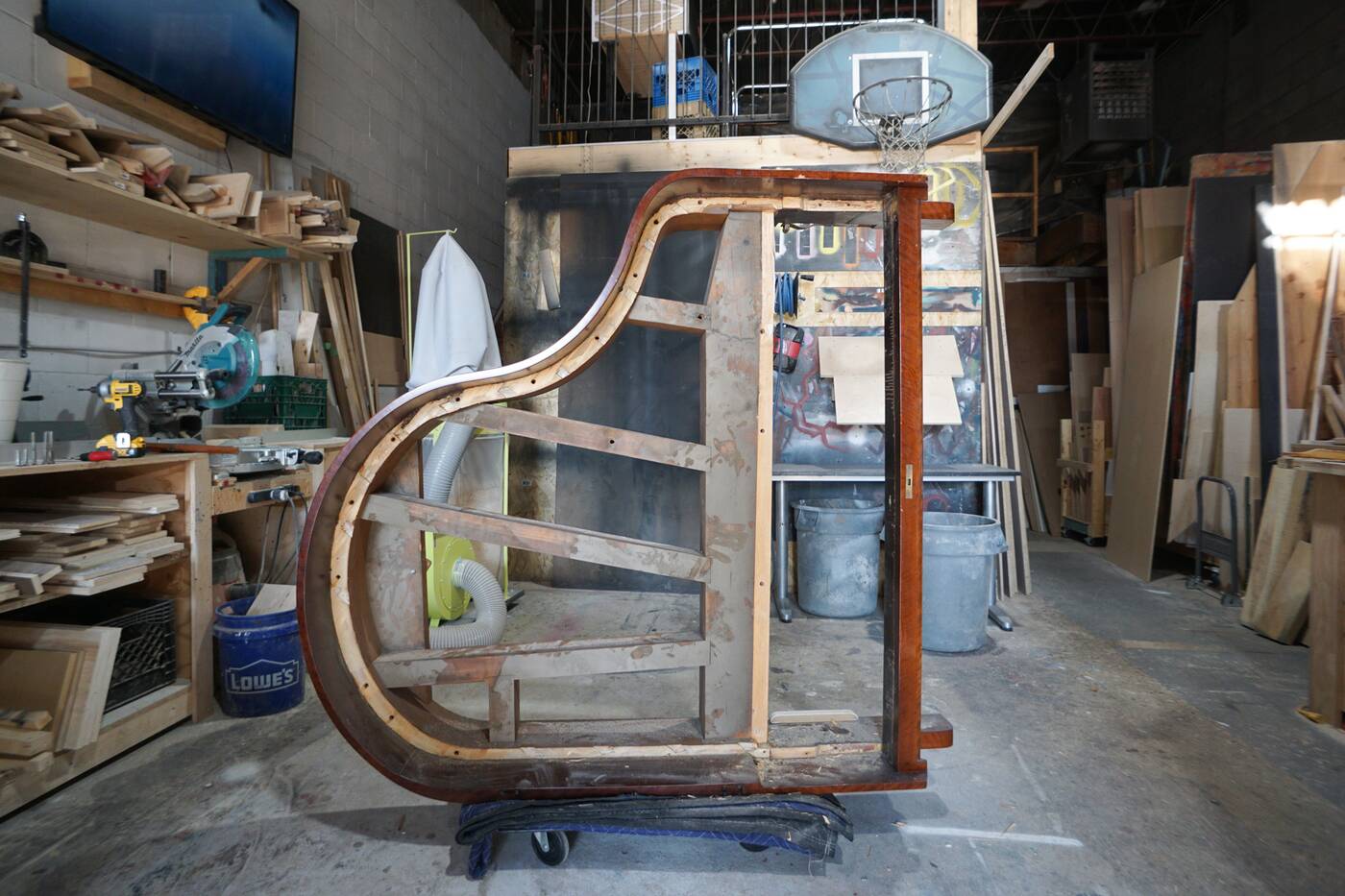 The shape of the piano was retained in the cabinet design.

O'Dell started the project to build the cabinet in May and finished about a month ago.

"There was a lot of painstaking deconstruction to make sure that I didn't break it."

The finished product is about five feet by five feet, it sits about 18 inches off the wall, and it weighs about 350 pounds. The keys and hammers are still there, protected by a glass cover. 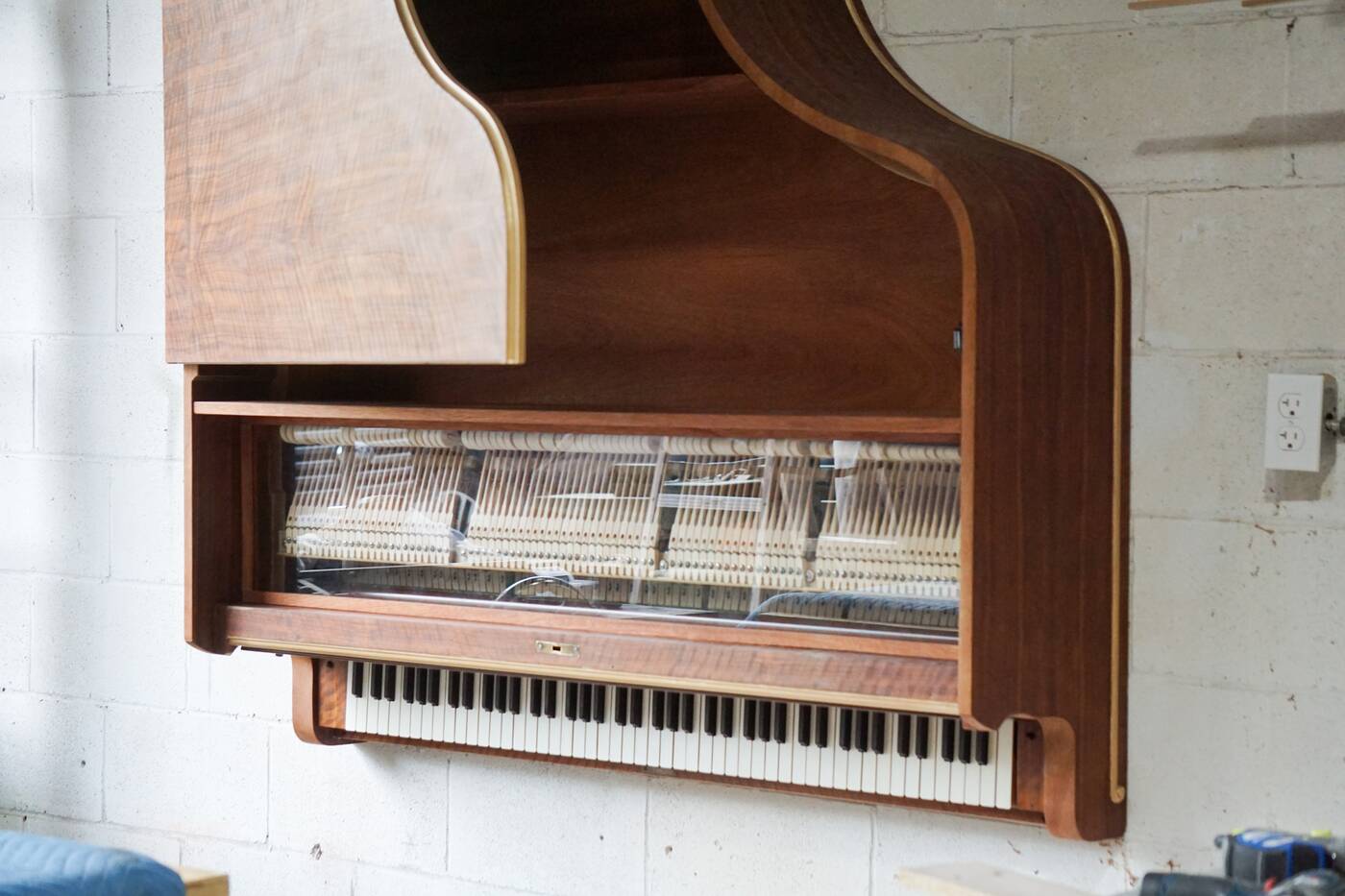 The keys and hammers are kept in the design.

Shelves can hold liquor bottles and there's a ledge for drinks.

"It's a fully functional bar," he says.

Ironically, the piano liquor cabinet was made in the Junction, a place held on to prohibition laws, banning alcohol sales until 1998. 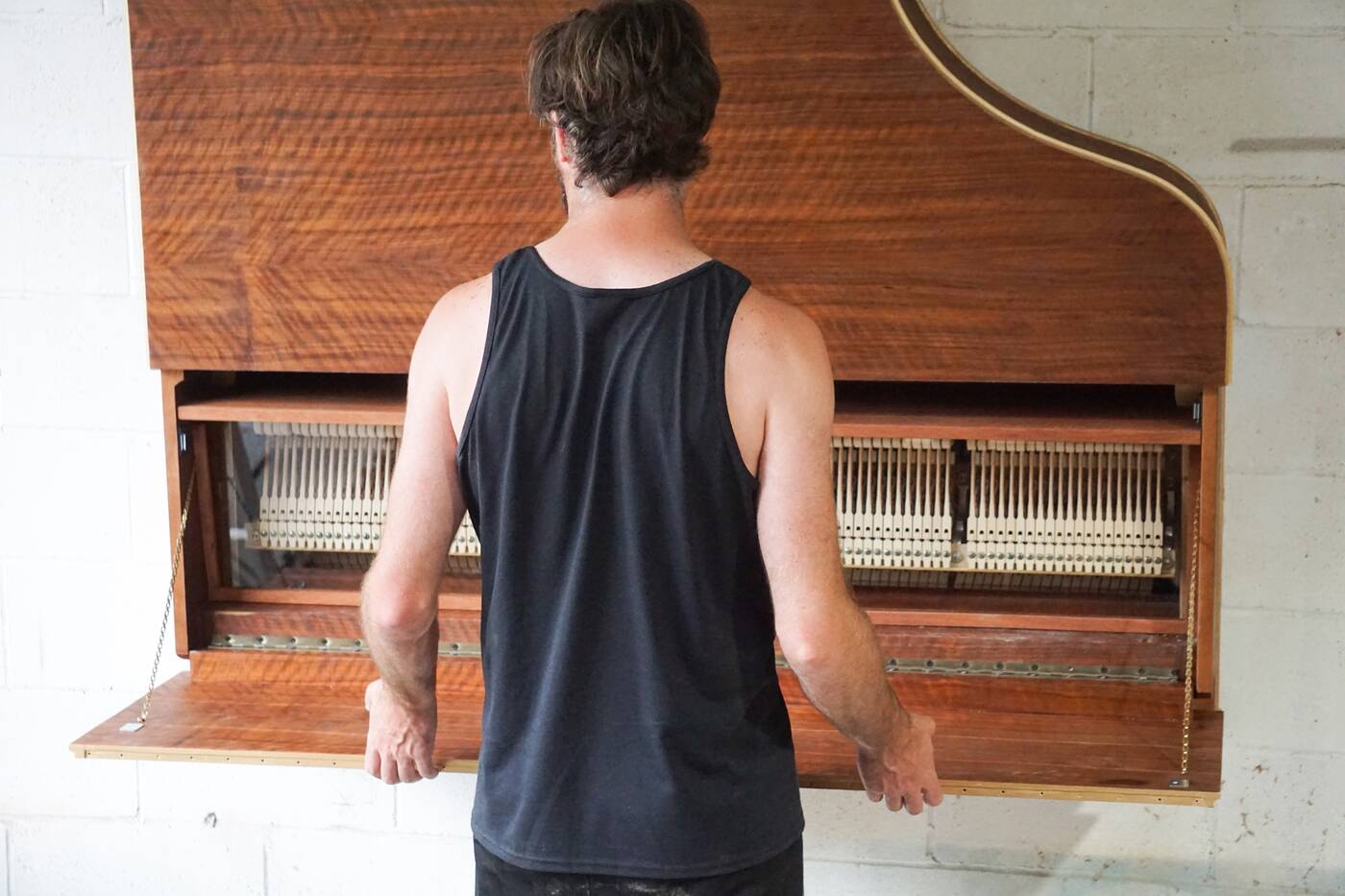 There is a shelf to hold drinks.

O'Dell wanted to use as much as the piano as possible so the hand-carved legs will become table lamps and the harp will become the top of a coffee table. The harp has a huge stamp with 'Toronto, Canada' on it.

Although the piano has travelled out of Canada, given its history, O'Dell would like it stay in Toronto.

For more information on how to purchase the piano cabinet, visit the Woodchip website but it won't be listed for sale until after Sept. 9.