With an estimated 10,000+ people in Toronto currently experiencing homelessness and hundreds of thousands more living in poverty, it's almost unfathomable to picture a retailer purposely destroying designer shoes before putting them in the trash (rather than, you know, donating them to people in need.)

And yet, locals continue to find troves of destroyed merch outside dumpsters or on the ground behind stores, as they have in the past at outposts of brands like OshKosh B'gosh and American Apparel.

A Twitter user who goes by Sarah Nicole is the latest Torontonian to stumble upon such a wasteful scene — this time outside a SoftMoc store in Bloor West Village.

Found outside @SoftMocShoes Bloor W location - shoes that were intentionally slashed and trashed instead of donated. WHAT IS GOING ON HERE?! pic.twitter.com/UPFiXZZFl1

"Bloor W. location — shoes that were intentionally slashed and trashed instead of donated. WHAT IS GOING ON HERE?!" she tweeted on Friday morning with three photos of the slashed shoes in question.

Among the merchandise seen inside and falling out of the large, transparent garbage bags are some Sorel boots, Steve Madden slip-on loafters, Converse (or Converse-style) sneakers, UGG booties and fur-lined moccasins.

Some of the items appear to be intact, but the UGGs and Steve Maddens have huge cuts through them, as does an insultaed SoftMoc-brand slipper.

The slashes are perfectly placed to render the shoes unwearable, suggesting that this isn't the aftermath of an unboxing incident gone wrong. 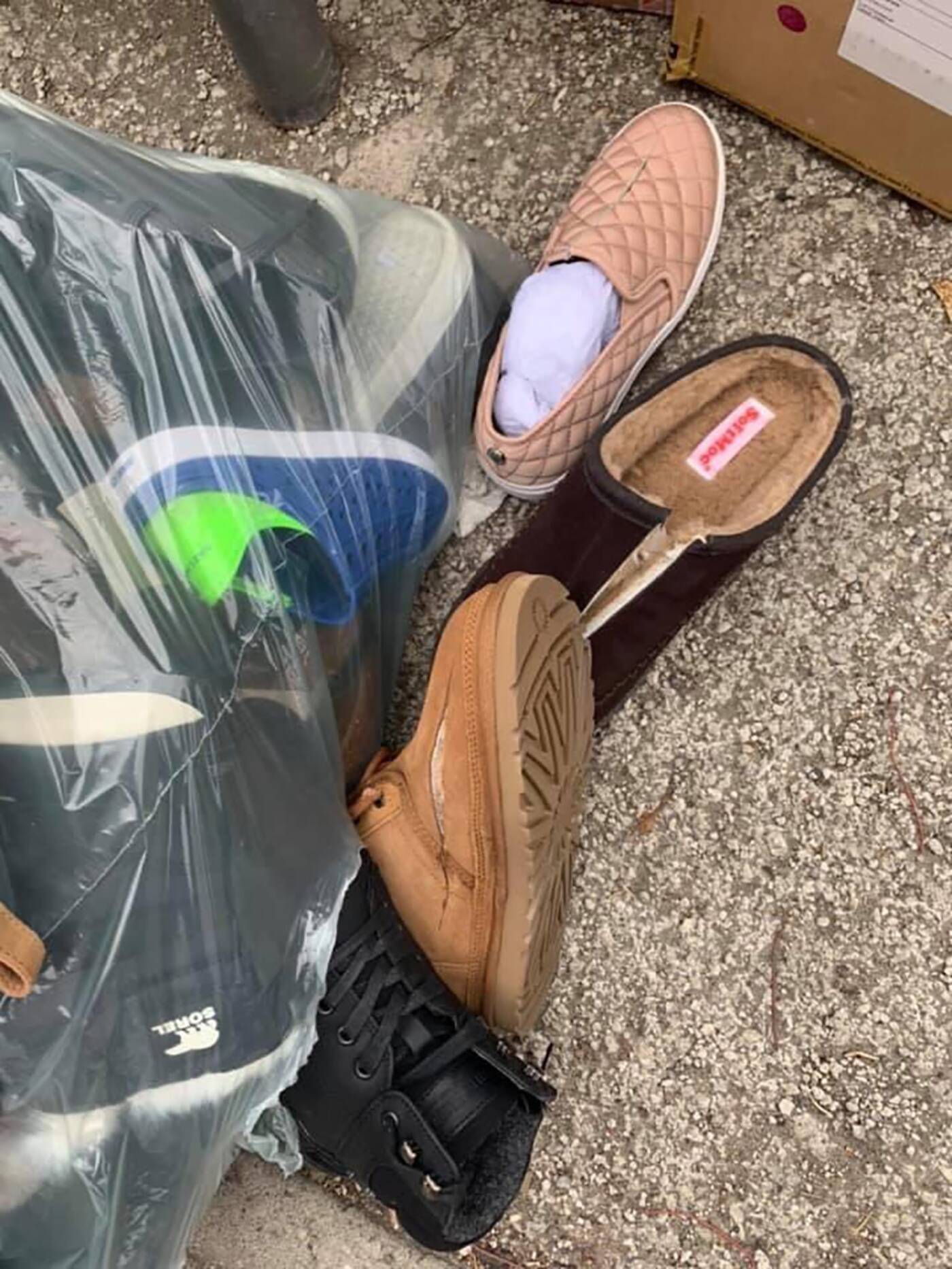 Shoes found outside the SoftMoc store at 2266 Bloor St. W. in Toronto on Friday were rendered unwearable thanks to deep slashes through the fabric. Image via @snrichtree.

Shoes and boots sold by SoftMoc range from under $100 to over $300. Uggs similar to those pictured in the tweet retail for $159.99 on the company's website.

SoftMoc, which is currently open in Ontario for curbside pickup and delivery only, did not reply to a request for comment from blogTO.

The brand's social media team did, however, respond to images of the destroyed shoes on Twitter.

"We appreciate you reaching out! There are internal reasons why items that are defective and not useable are not donated," reads SoftMoc's reply to Sarah Nicole's original tweet.

"At SoftMoc, we take environmental concerns very seriously and have many other measures put into place to do our best to reduce, reuse and recycle." 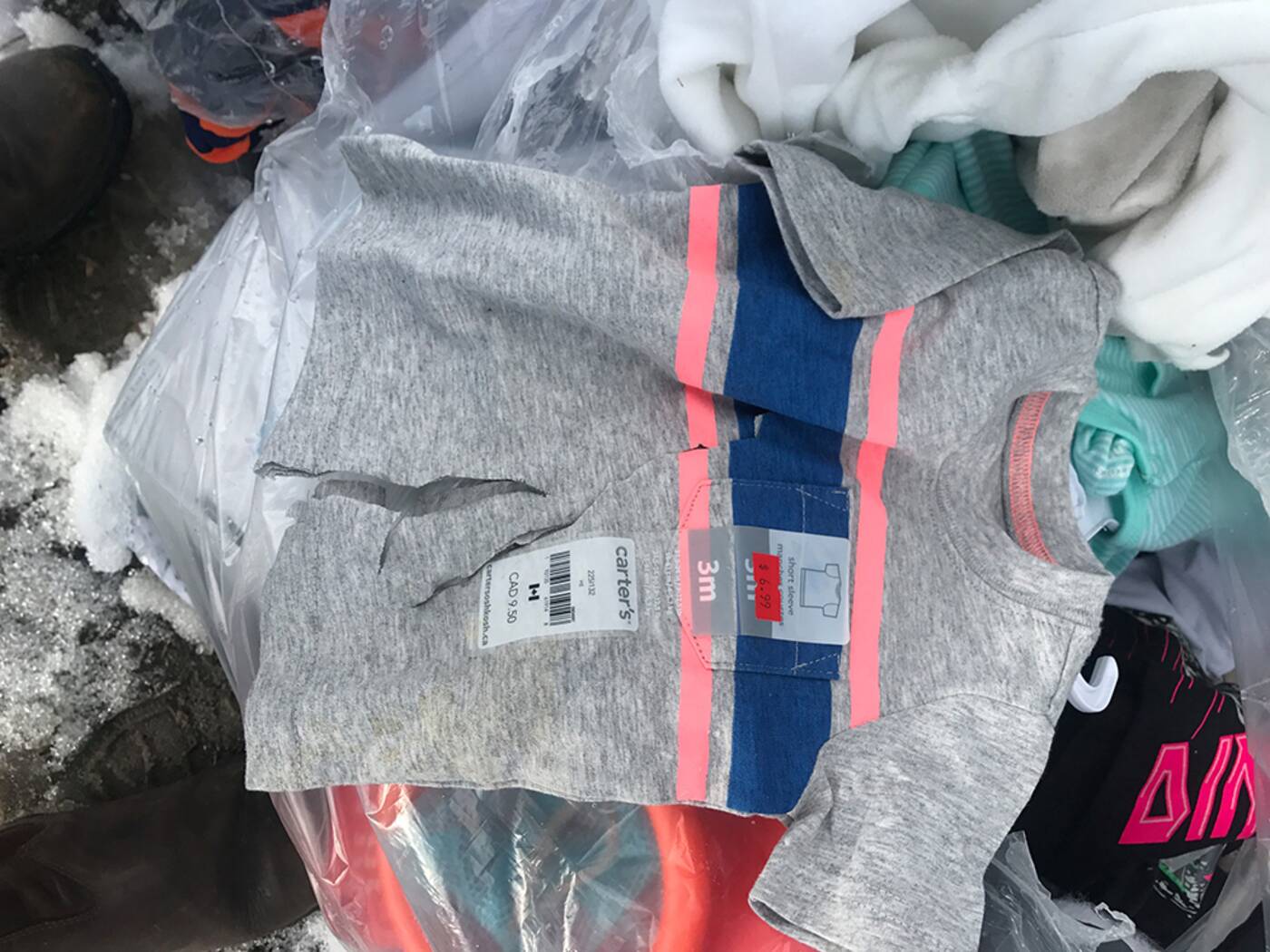 Toronto residents were outraged in January of 2020 after photos surfaced of cut-up Carter's OshKosh B'gosh children's clothing outside the Dufferin Mall. Image via Natahsa McKenna.

True as SoftMoc's statement may be, the practice of slashing up unsold merchandise isn't new, or new to contoversy.

In the U.S., former employees of stores like Urban Outfitters have spoken out to say that they were actually instructed to destroy unsold merchandise before throwing it out. Victoria's Secret, Nike, Eddie Bauer, H&M and J.C. Penney (on behalf of Ralph Lauren) have all been similarly implicated in the past.

"Many retailers will destroy garments that cannot be sold in order to prevent expensive brand-name products from entering society at low or no cost," reported the New York Times in 2017.

"Some companies simply do not want their products — or even knockoffs of their goods — to be worn by people who are obviously unable to afford them."