Stefanie Furgiuele, 27, started her business Original Genes as a side hustle in 2016, but the COVID-19 pandemic ended up turning it into a career. 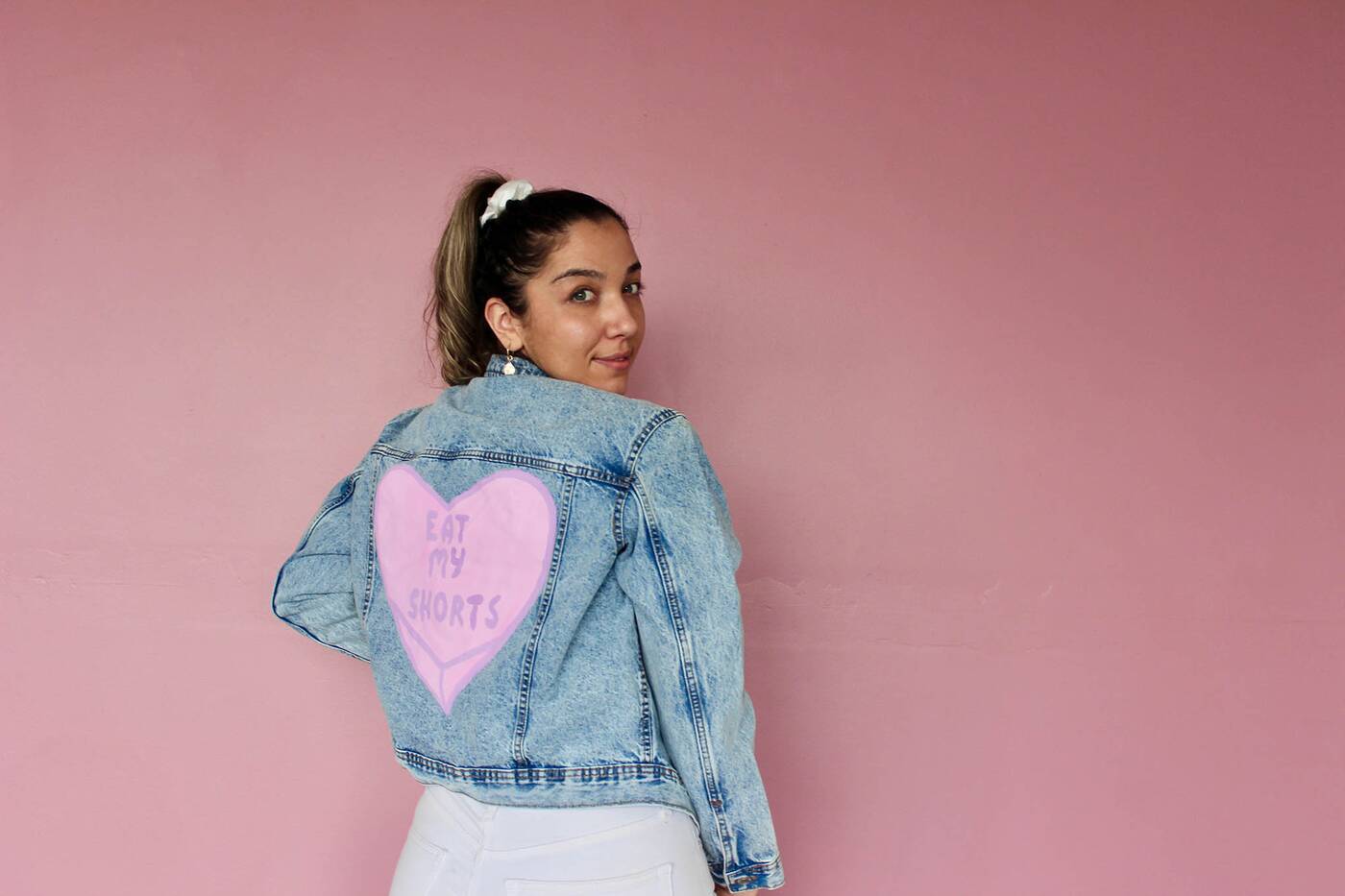 In addition to her fashion merchandise, she also offers virtual paint events and paint-at-home kits that come with a tote and an online guide.

Her hand-painted jackets range from $80 to $200 depending on the design and customization. You can place an order for your own custom design via Instagram DM or on her website.

"It wasn't something I really set out to do. I was working a 9-5 job that was really Excel-focused, but I was a very creative person, and I had always loved painting," Furgiele told BlogTO.

After she was let go from her job as an event planner in April 2020, Furgiuele took the plunge, left the 9-5 grind and put her paintbrush to work full time.

With no steady income in April 2020, Furgiele was nervous about making the leap, but it worked out in her favour.

She took up some part-time work as a server over the summer of 2020 and focused on building up her business, which already had a solid foundation.

"I put my time into my business because I already had it built up, but it wasn't until this holiday season where I posted so many corporate paint nights and created so many stockings, jackets and shoes that I was like, okay, I think I can 100% do this full time, so this year I'm all in."

After the holiday season of 2020/2021, she can now rely on her business as her sole income confidently.

"Everything works out for a reason, and you have to follow your passion," she said, "I mean, now I'm making a career as an artist." 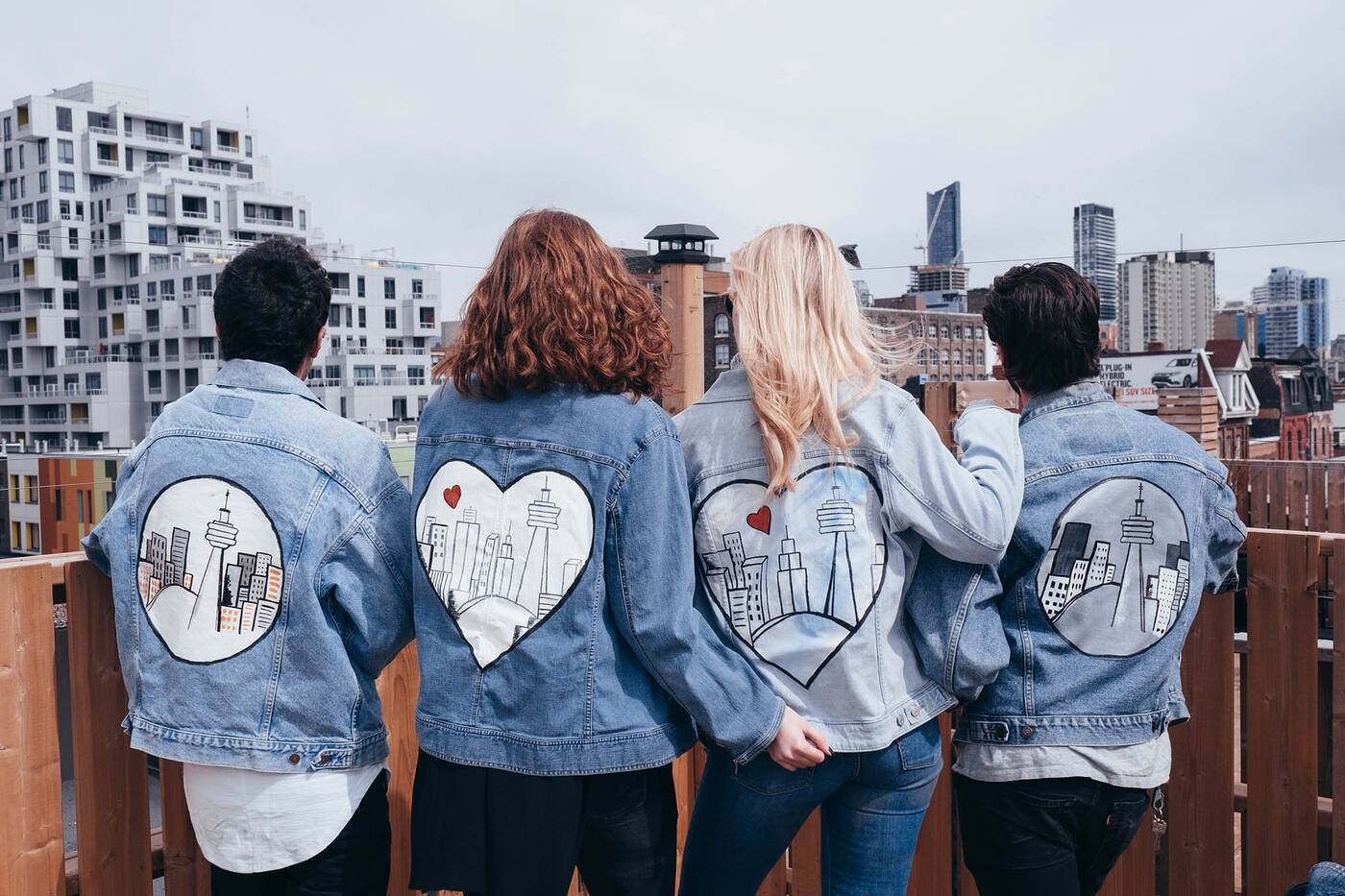 Her most popular design is her classic Toronto skyline jacket, which features the Toronto city skyline in various shapes.

Frugielle grew up in the Dufferin and College area, and the design for her most popular jacket was inspired by her Toronto Pride.

"I have a lot of Toronto pride and I wanted to wear and represent my city," she said.

Each piece of clothing can take Frugielle anywhere from 1-4 hours to paint, with custom designs ranging on the longer side, which happen to make up about 80 per cent of her orders.

However, jackets and jeans aren't Frugielle's only forte. She also creates custom kicks. 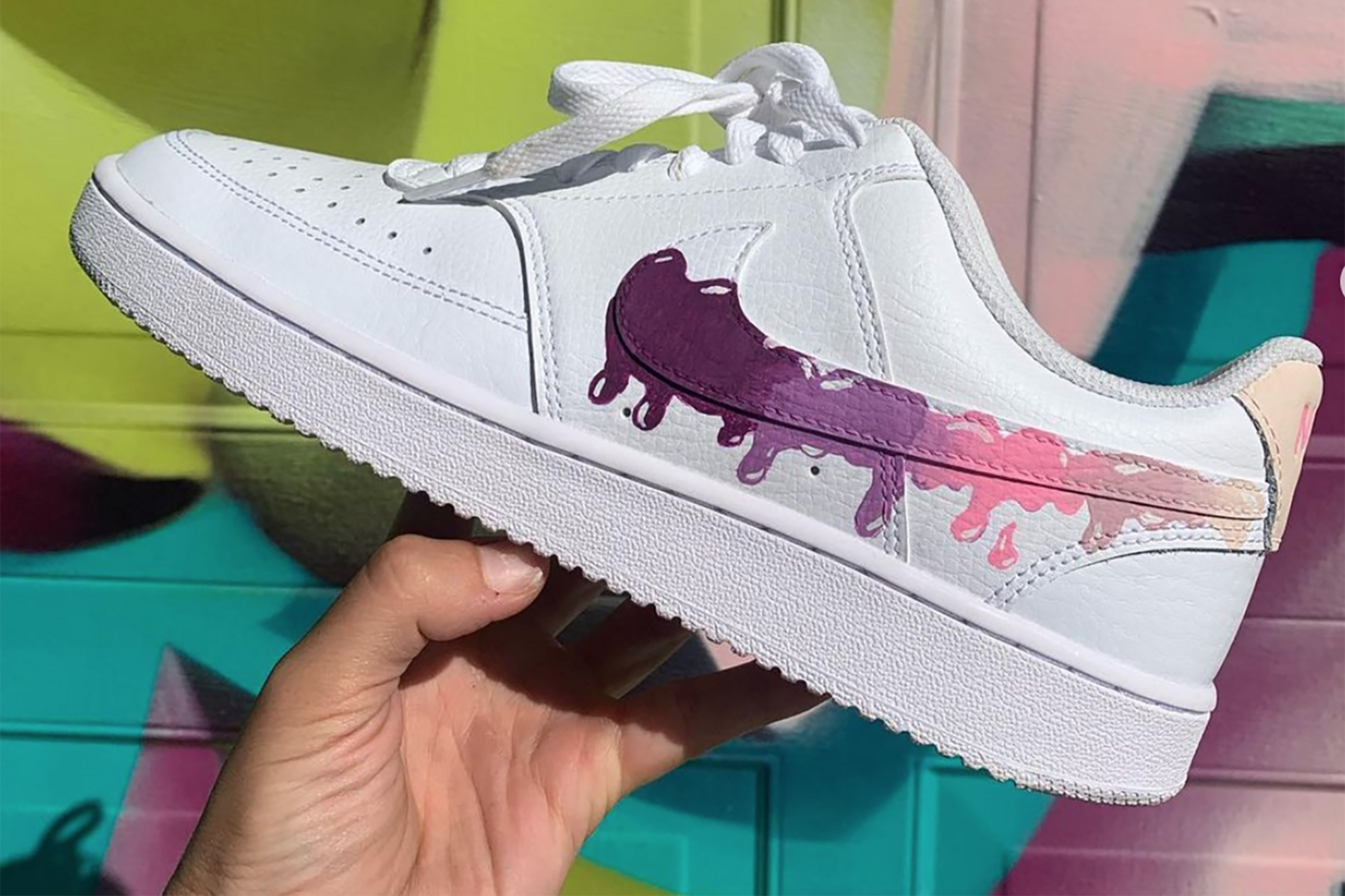 Furgiuele grew up with a passion for painting and art, but she went to school for business at McMaster University for more practical reasons.

"In my mind, I thought I could never make a career out of art, so that's why I went into business, and then into the fashion route because I always had a more creative mind behind me," she said.

After graduating, she juggled a few jobs, from working in fashion at Hudson's Bay to event planning, but neither allowed her to express her desire to be creative.

"One day I decided to paint a denim jacket, and to this day I don't know why, I just really wanted to. I sent a few pictures to my friends and my mom was like, that is so cool and different."

In 2016, Frugiele didn't see her jackets as anything other than a creative outlet, but her mom saw a different picture.

"My mom saw it as a business opportunity and she was like, 'this could be your thing.' She went out and bought me 25 jackets the next day and told me to paint them."

From there, Frugiele went on to sell her jackets at the Dundas West Fest in Toronto, and after finding success there, she started up her Instagram account. 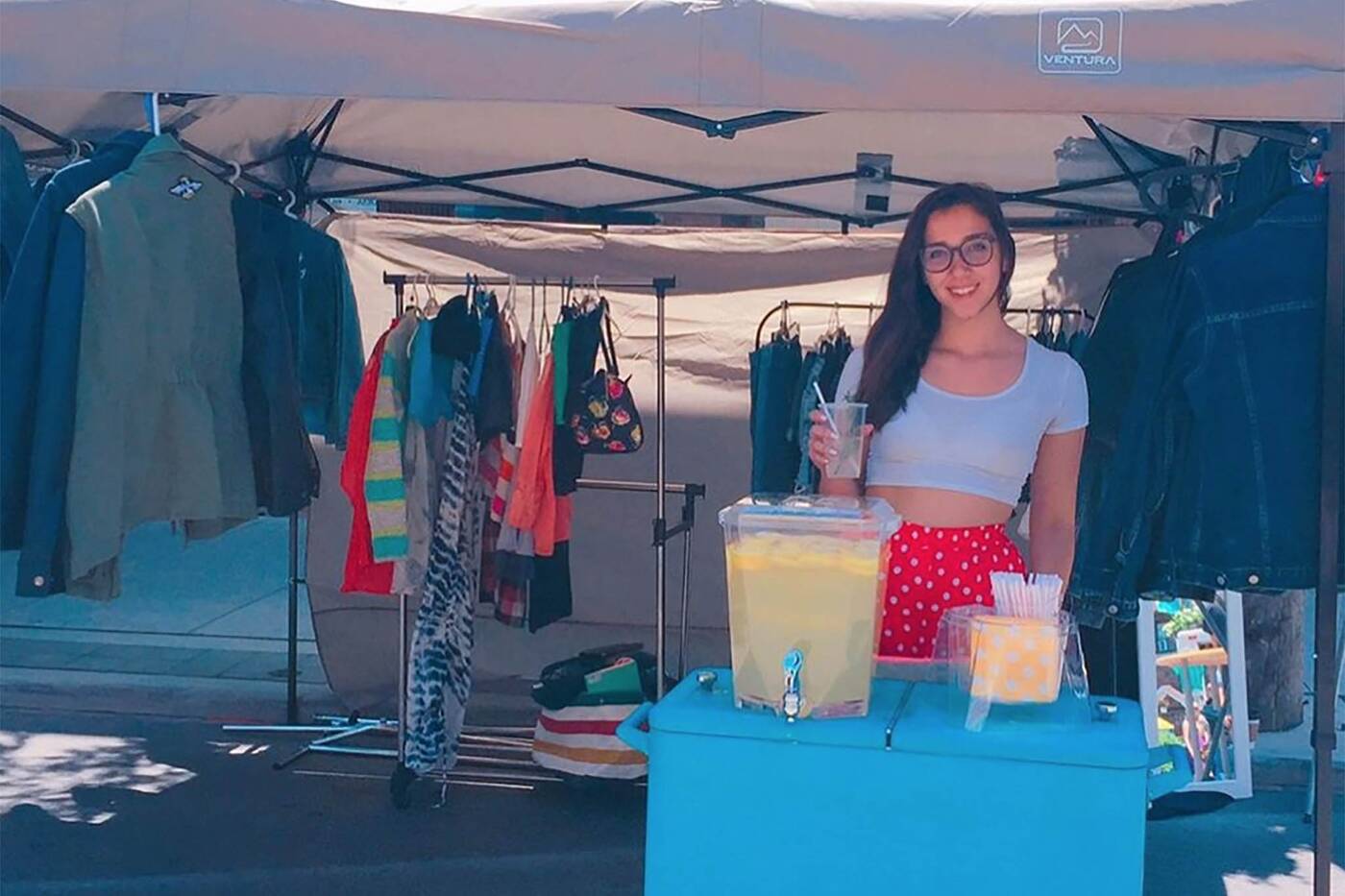 How it took off

Fast forward to April 2020. After being let go from her job, Furgiuele had to make a major pivot.

She dedicated her energy to her business and partnered with her local gym and friends to create paint nights.

She realized after talking to a few corporate companies there was "a huge need for some creative breaks, so that's when I decided to go virtual and do corporate paint nights online."

In the summer, she caught a lucky break.

A customer of hers was walking through the Sherway Gardens Hudson's Bay store wearing a pair of her custom shoes and one of the managers stopped him.

"He asked him where he had gotten his shoes from, and he told the manager about me. He said he was interested in getting in contact with me, but I hadn’t heard from the manager in like a week.

"So I called that store and spoke with every manager until I found the one been interested in my shoes."

From that connection, Furgiuele ended up landing her brand in 3 (almost 4) Hudson's Bay stores. 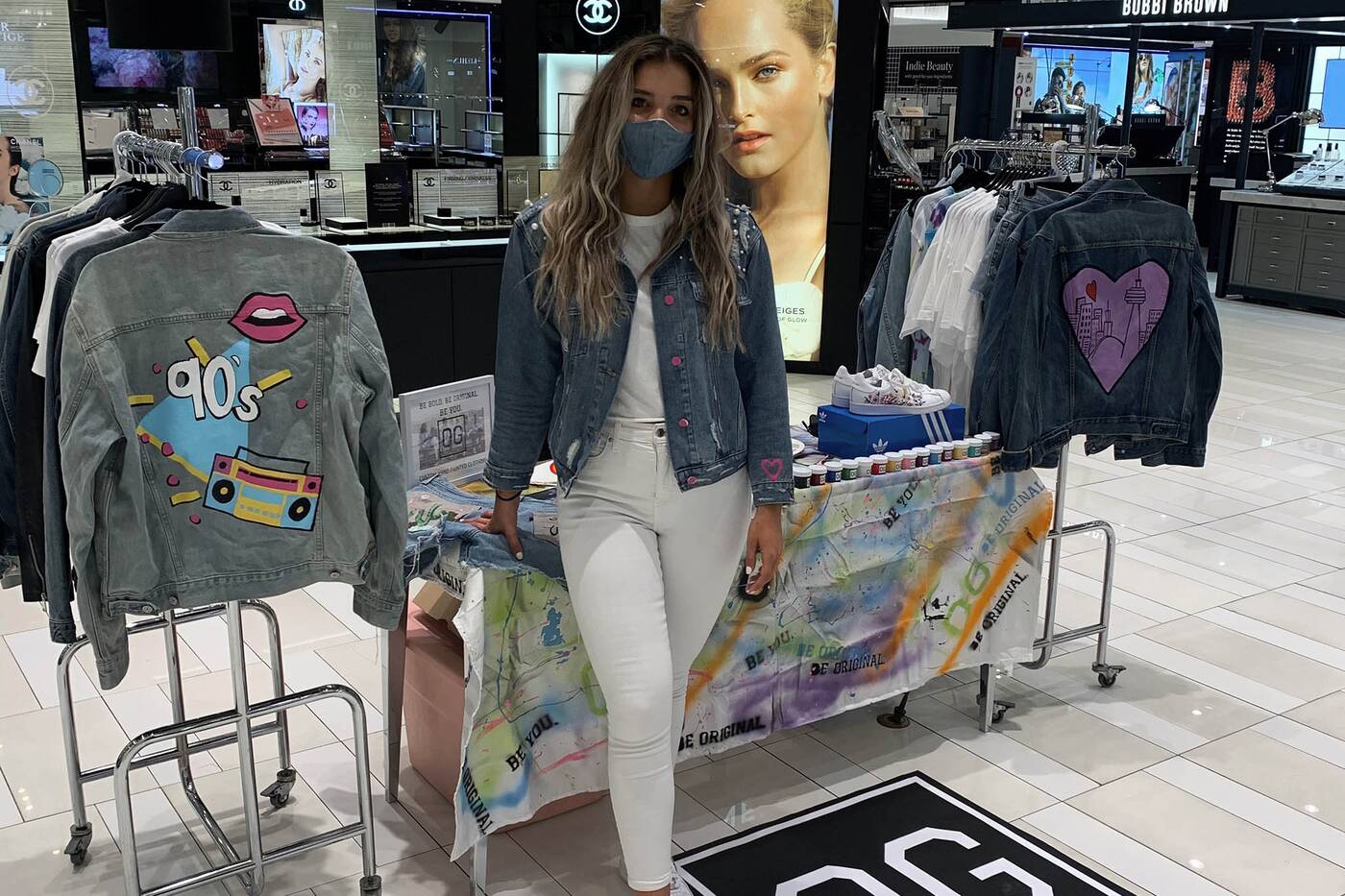 "I ended up building a partnership with them for 8 weeks, and I went to three different stores in November over the weekends, but once December hit, we had to close down," she said.

Before the second lockdown in Toronto, she was about to go to Square One.

"I wouldn't have believed if someone had told me five years ago that I going to be in retailers and working full time," she said.

While the second lockdown put a dent in her plans, she persevered and ended up with her most successful holiday season yet that solidified her choice to ditch the 9-5.

Moving forward Furgiuele hopes to expand her business with a virtual preloved jacket market in march 2021, where customers can choose their exact jacket online.