An online Toronto streetwear company is coming under fire from customers after allegations of scamming and "shady" business practices over the last several months.

More than 60 people who bought items from the local business Teedot Apparel have filed complaints with the Better Business Bureau (BBB) after accusing the company of withholding orders, denying refunds, and ghosting customers for weeks at a time.

The company, which deals in tees and sweatshirts sporting perennial catch phrases like "Citizen of Toronto" and "Teedot," has been the subject of online ire for nearly a year; there's even a Reddit thread dedicated to all the ways they've infuriated former customers.

The most common complaint is that no one seems to be getting their orders. Visit Teedot's BBB profile—which currently has a F rating—and you'll see scores of customers who've supposedly been waiting upward of two months for their clothes.

The procedure goes something like this: customers buy their items on the Teedot online store, expecting to receive it within two to three weeks, as indicated on the website.

Why am I waiting 3 months for sweaters to ship from my own city?! #teedotapparel is ridiculous. Guys please don’t buy!!! pic.twitter.com/0St4bs0jTd

Weeks go by, then months, until the customer sends an inquiry to Teedot's Support account. If they're lucky, they receive a common response citing warehouse backlogs, and a promise that the order is on its way.

Some customers are still waiting for closure more than four months since ordering their clothes. Several people who spoke with me, but prefer not to have their identities revealed, say they've filed complaints with the Better Business Bureau and are still awaiting their PayPal refunds.

@TeedotApparel It’s been a week since you have “escalated” my order from April 21st without any further update. Normally an escalation warrants an update to your customer within 24-48 hours at the most. How you will resolve this? #CustServFail #RefundMe

According to the BBB, the bureau reached out to Teedot Apparel on April 3 regarding the "pattern of complaints" they were receiving about the business, but has yet to receive a response.

Jeremiah Reandino says he first ordered a sweater in December 2018 for $55, exchanged more than five emails with Teedot, and made multiple requests for a refund, but was completely disregarded by the Teedot staff.

"That's when I saw the reviews on the BBB," says Reandino. "I realized, wow, I'm not the only person that ordered and never received my product." 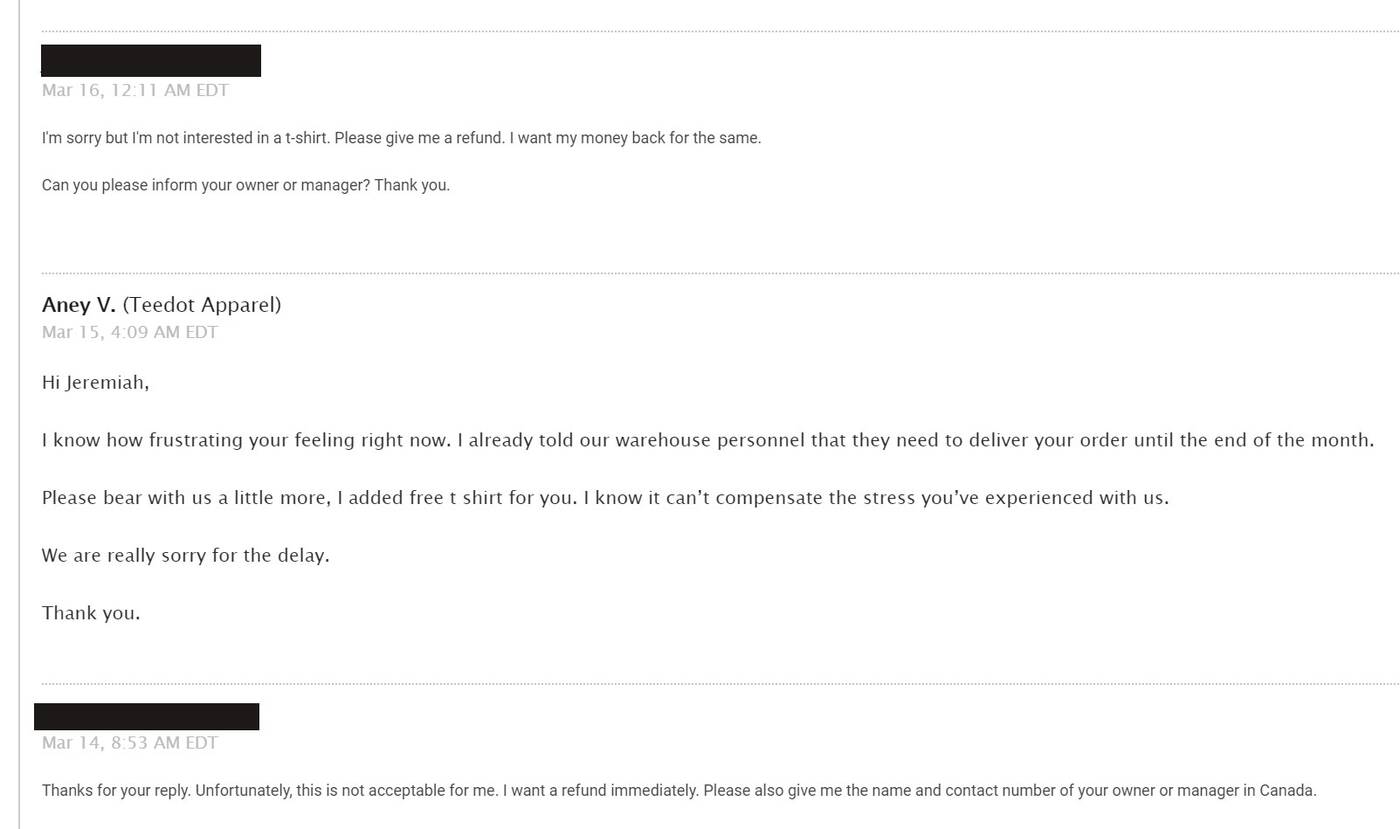 An e-mail chain between Teedot Apparel and customer Jeremiah Reandino show that Reandino's requests for a full refund were disregarded multiple times by staff.

It wasn't until Reandino threatened legal action that he finally received his order on April 30, despite having requested a full refund instead.

"It's too bad, they have nice branding, a nice sweater," he says. "But I would never buy from these guys again, I would even discourage others from doing so."

Another customer, Eric, who first created the Reddit thread, says that multiple complaints and "warning posts" he made on the brand's Instagram and other social media channels were promptly deleted. 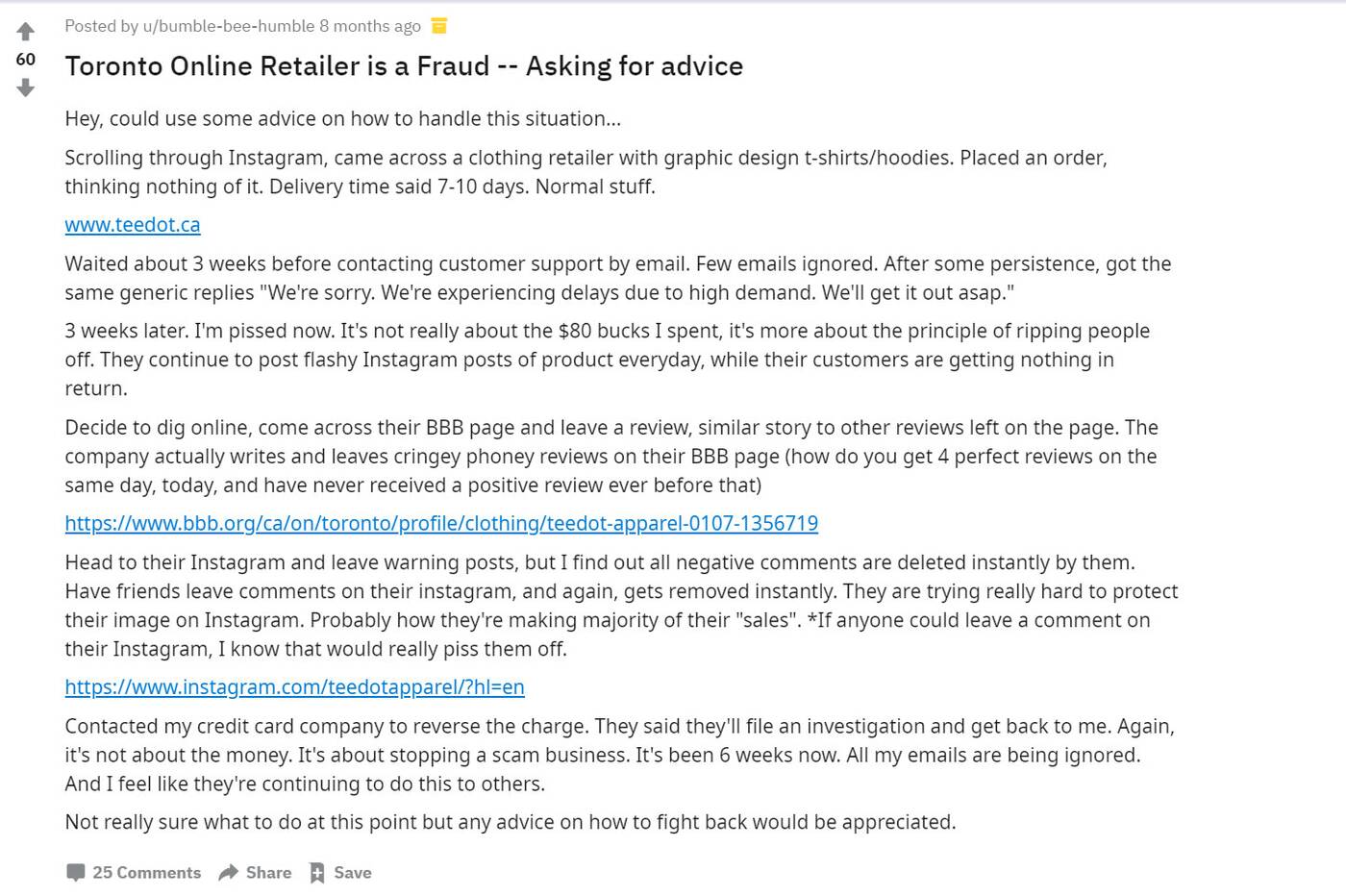 One angry customer created a Reddit post about Teedot Apparel last year which received multiple replies from users who experienced the same thing.

"If they were getting all these orders and couldn't fulfil them, why would they have more pictures and more discounted items on their website?" he asks.

Head to Teedot's Instagram account and you'll see the business is pretty consistent at posting on social; posts as recently as April promote women's racer-back tank tops with their "Citizen of Toronto" slogan on the front.

But according to Teedot's owner, who goes by J.R., the company has "cut down on advertising" to buffer the flood of demands.

"We have too many orders, too many demands, and we're trying our best to get them out as fast as we can," he said in a phone interview last week.

According to J.R., what started as a small online hobby in 2014 expanded far too quickly for Teedot's four-staff operation, thanks to heavy social media promotion.

"The first year, second year, third year, there were no problems, but just last year it kind of blew up," he says.

"We do send gift cards to compensate for the delay. We do take care of our customers, we don't just take their money. But at this point we're playing catch up."

Super frustrated that my order from @TeedotApparel that I placed and paid for on April 9 still hasn’t shipped and they’re not responding to my emails. Why are they sending out sale emails if they can’t fulfill orders they took 7 weeks ago? #badcustomerservice

When asked why Teedot hasn't made an official public statement addressing the slew of complaints flooding the Twittersphere and Reddit, J.R. says they're working on it, though their most recent posts deflect to more recent Toronto Wins than L's.

When asked why the company chooses to delete negative comments from their social media pages, he insists that they're not able to monitor "DMs," and suggests that customers send e-mails instead.

He assures me that all the unfulfilled orders will be honoured eventually, but isn't able to give me an exact timeline. As for discounts, he says filed claims are in the hands of PayPal.

He also mentions that they're working on hiring more support staff, and plan on having same-day delivery implemented this year by outsourcing to a third-party company in Scarborough.

"It's too much demand, that's all there is," he says. "They love to support Toronto stuff...the love for the city is too much."