Who walked out of Lastman's Bad Boy on Boxing Day with a free Amazon Alexa? NOOOBODY!

Hundreds of people on Reddit are fuming today after someone in the popular, Toronto-specific subforum wrote that "Bad Boy Furniture just scammed a ton of innocent people who waited outside the store for hours for their 'sale and giveaway.'"

"My mother's friend called her saying that he waited outside for two hours this morning, along with several dozen other people in line outside, for the '6-8 AM boxing day sale' at his local Bad Boy Furniture," reads the Reddit post.

He waited, according to the Redditor, "just to have the store representatives tell everyone that they didn't have most of the desired products for sale (particularly the $100 sofa) and there was no Amazon Alexa giveaway." 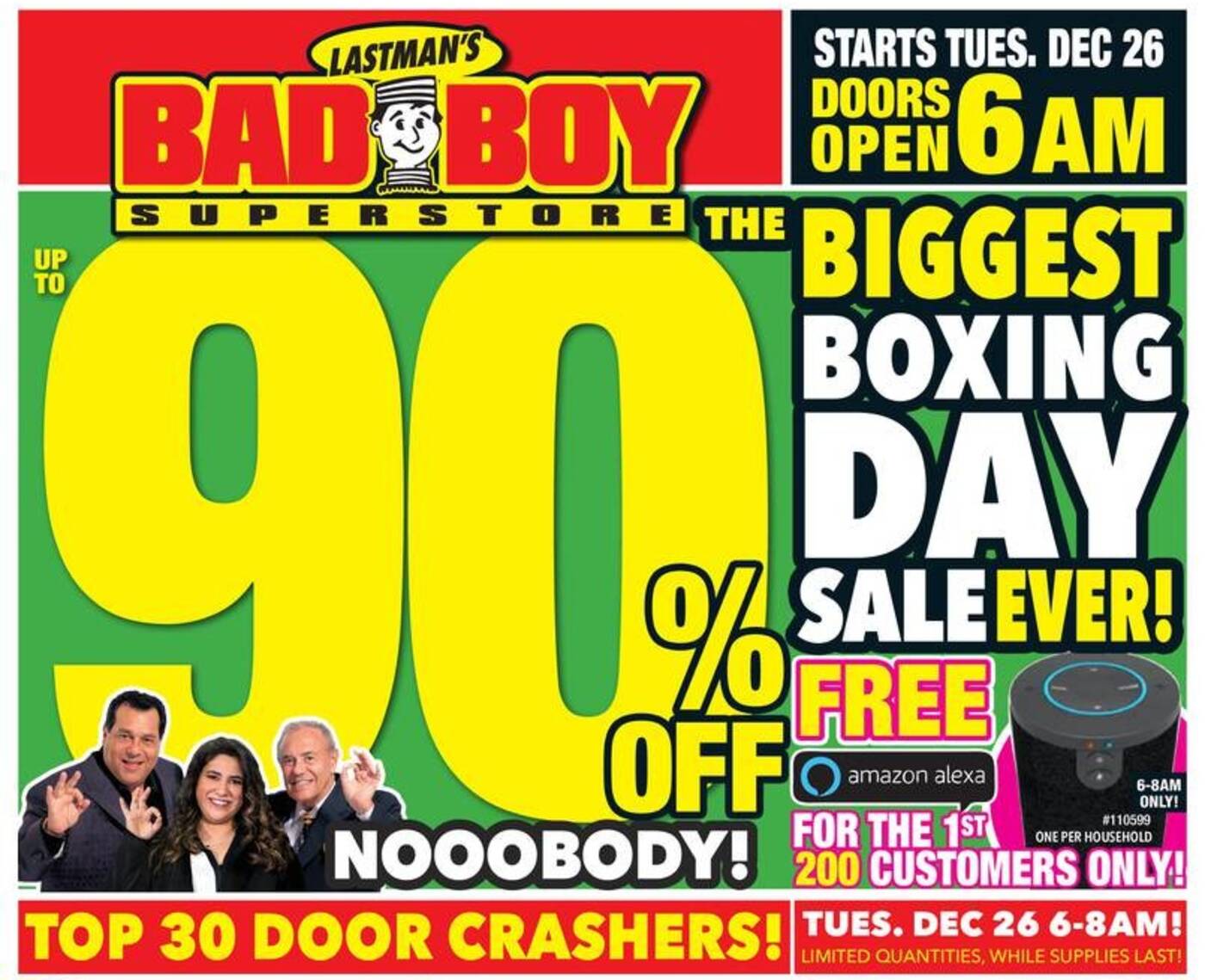 A flyer for the Toronto-based company's 2017 Boxing Day sale, linked to in that post, advertises a "free Amazon Alexa for the 1st 200 customers only" between 6 and 8 a.m. in "limited quantities, while supplies last."

The $100 sofa (a love seat) mentioned in the Reddit post is also featured in the flyer. "Save $350," reads the ad, which also has a bubble that says "first 50 customers."

"Advertising goods that you don't actually have is called Bait & Switch," reads another. "It is contained in section of 74.04 of the Competition Act and can result in some hefty fines."

But here's the thing – Bad Boy never advertised an Alexa "giveaway" in the flyer. The Alexa home assistants were a gift with purchase for the first 200 customers.

Those customers will get their free Alexas, according to Bad Boy President Tony Balasingham – just not yet.

"We didn't receive our shipment in time," he said, noting that eligible customers were given rain checks for the Alexa devices.

As for the couches, there were indeed only 50 available to purchase for $98 – but those 50 couches were spread out between all seven of Bad Boy's locations across the GTA.

a little annoyed with @LastmansBadBoy went to buy a couch from the flyer that was advertised as $98 but they sold out before 6:30 am but only had 5 couches ( not 50) to begin with but FLOOR model advertised at $198. is it 50 Canada wide ? why ?

Some customers on Twitter and Facebook are complaining that they were unable to get any of the flyer's door-busting deals due to a lack of product.

"Woke up to get the TV deal and a free gift for the first 200 people," wrote one woman on Twitter. "We got No TV (because there was only 7) and no free gift. Very disappointing."

Big thanks to all the #Barrie @LastmansBadBoy staff. especially the super kind lady you was working the front door area this morning. She worked tirelessly for me. To find the tv I just bought, plus my love seat mixup. #WhosBetterThanBadBoy? #NoooBody 👌🏻🇨🇦

Of course, there are plenty of satisfied customers tweeting about how well they made out at the Bad Boy Boxing Day Sale. Some of them had shown up as early as 2 a.m. to take advantage of the deals.

Balasingham said that dissatisfied customers are always welcome to contact the company.