Similar to a murder mystery party, you pay $45 for a ticket a few months in advance and receive a character to portray, with wants and needs that intersect with other characters.

On the night of the party, Zeenockers dress up and come prepared to pretend while partying. 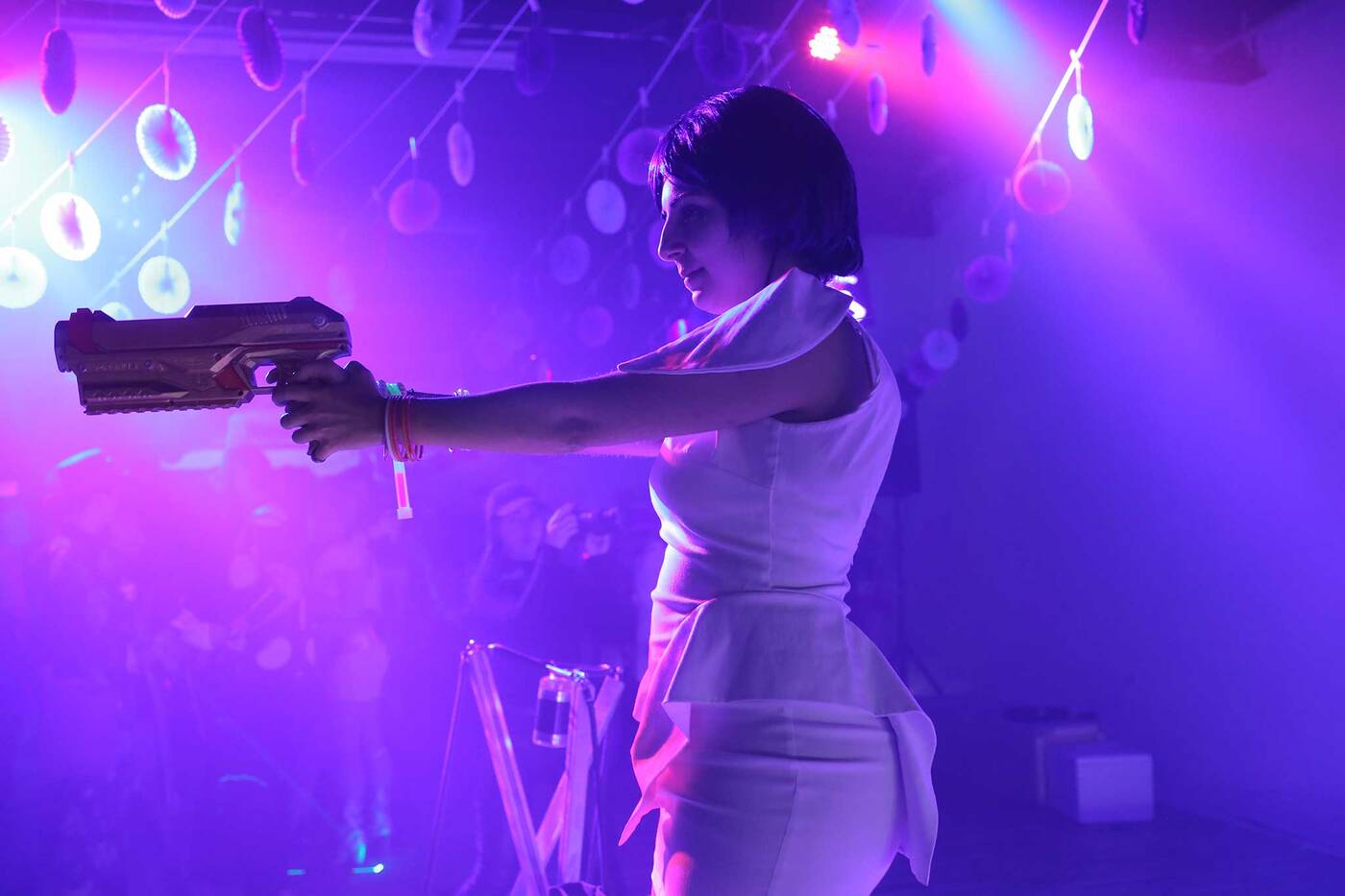 I visited Zeenok’s late on a Saturday night. The action was already well underway by the time I got there. The warehouse-esque space was decorated like an interstellar-rave-meets-The Jetsons-on-MDMA with a full bar, crazy lights, and a constantly-spewing smoke machine.

There were costumed players manipulating characters, completing missions, and avoiding death (which exists as a brief time out in the back of the party space).

Back on Earth, I chatted with one of the founders, Corey Reid. He explained that Zeenok’s originally started with a group of friends back in the ‘80s.

The first parties took place at the house of the other founder, Andreas Krebs and were basically just an excuse to dress up and have fun pretending with other friends. 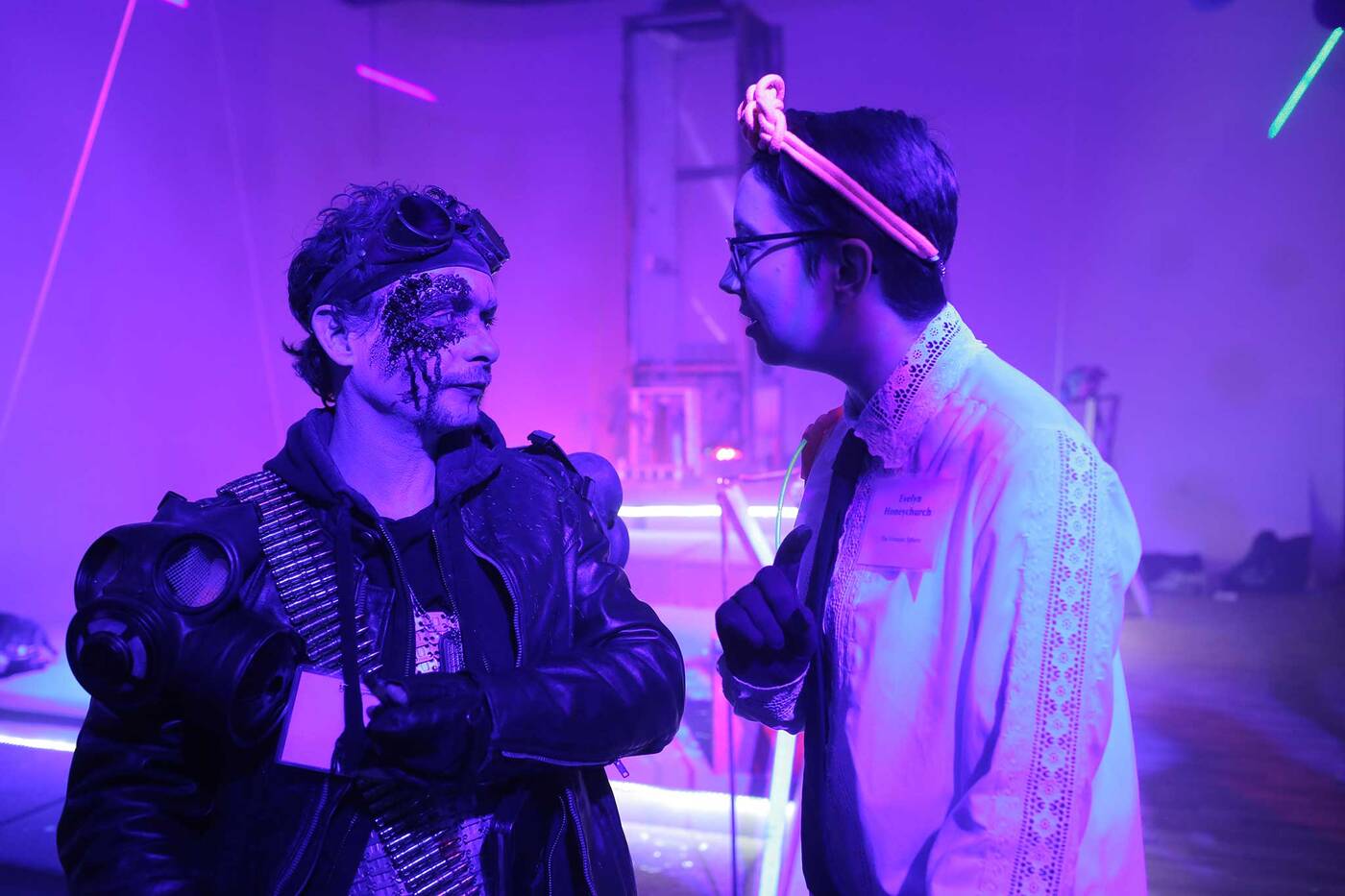 Now, the parties have exploded into full events that take months of planning. All of the characters are created by a team of writers and kept in a huge spreadsheet to record the wants and intersecting relationships of the numerous characters. They also have a crew of people to design the space to make it feel as authentic and fun as possible.

Back in space, controversy had emerged. Someone was slaughtering a (stuffed) pig to find a special bracelet. There was a marriage. There was alleged sabotage. There were gooey entrails that somehow seeped out of an adorable stuffed pig that sadly reminded me of Babe: Pig in the City. There was even more smoke. 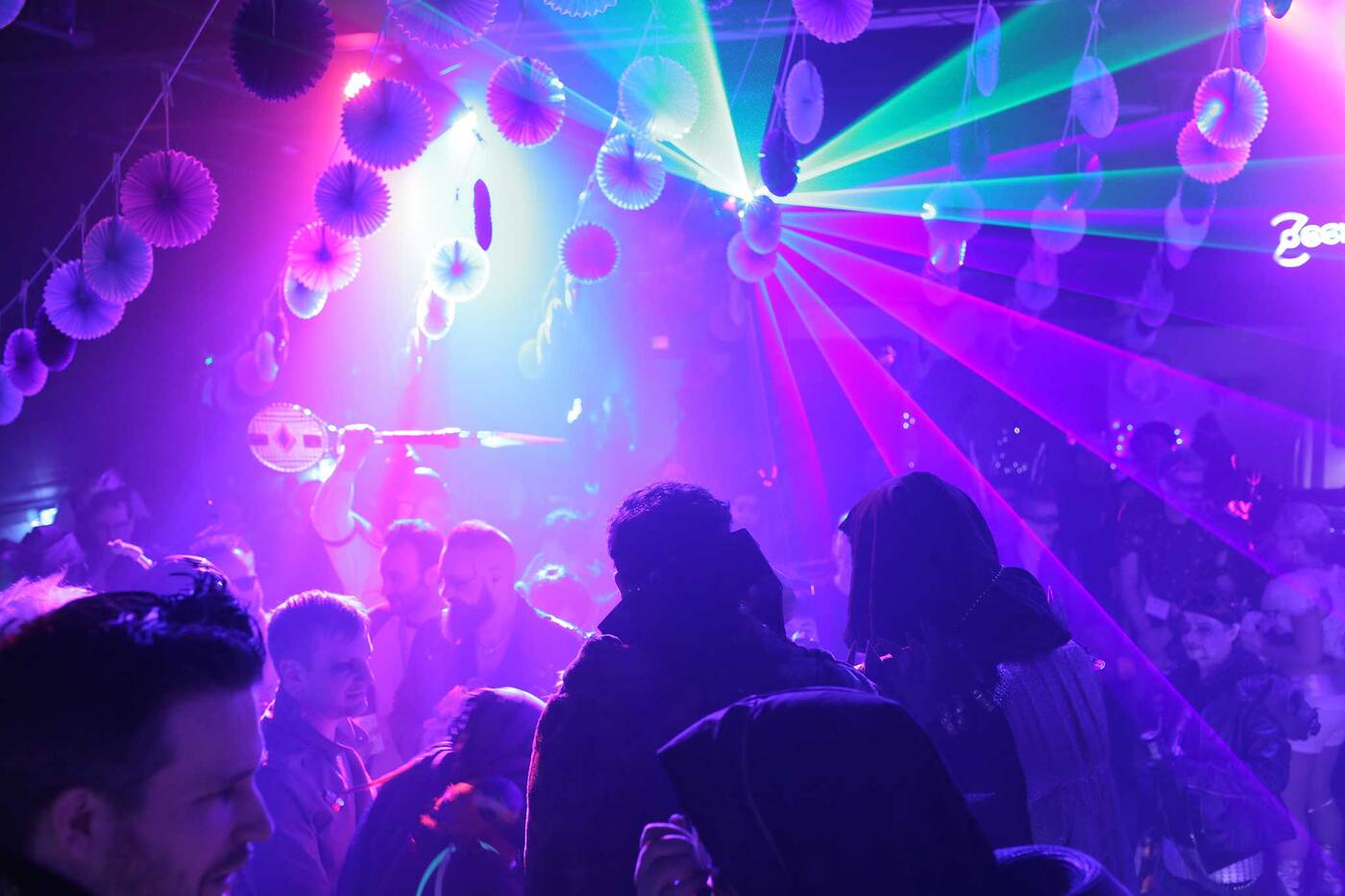 Paying heed to the zoo hypothesis, I simply observed as the characters played on into the night.

Though each player receives a pamphlet with all their character information (including wants/point of view, which faction they belong to, other characters they know), the night works especially well because of the commitment to characters and the costumes.

There was a regal woman in a fully metallic outfit quietly conspiring to poison someone. There was an excited man in an intricate robe stabbing someone while yelling “MURDER!”. 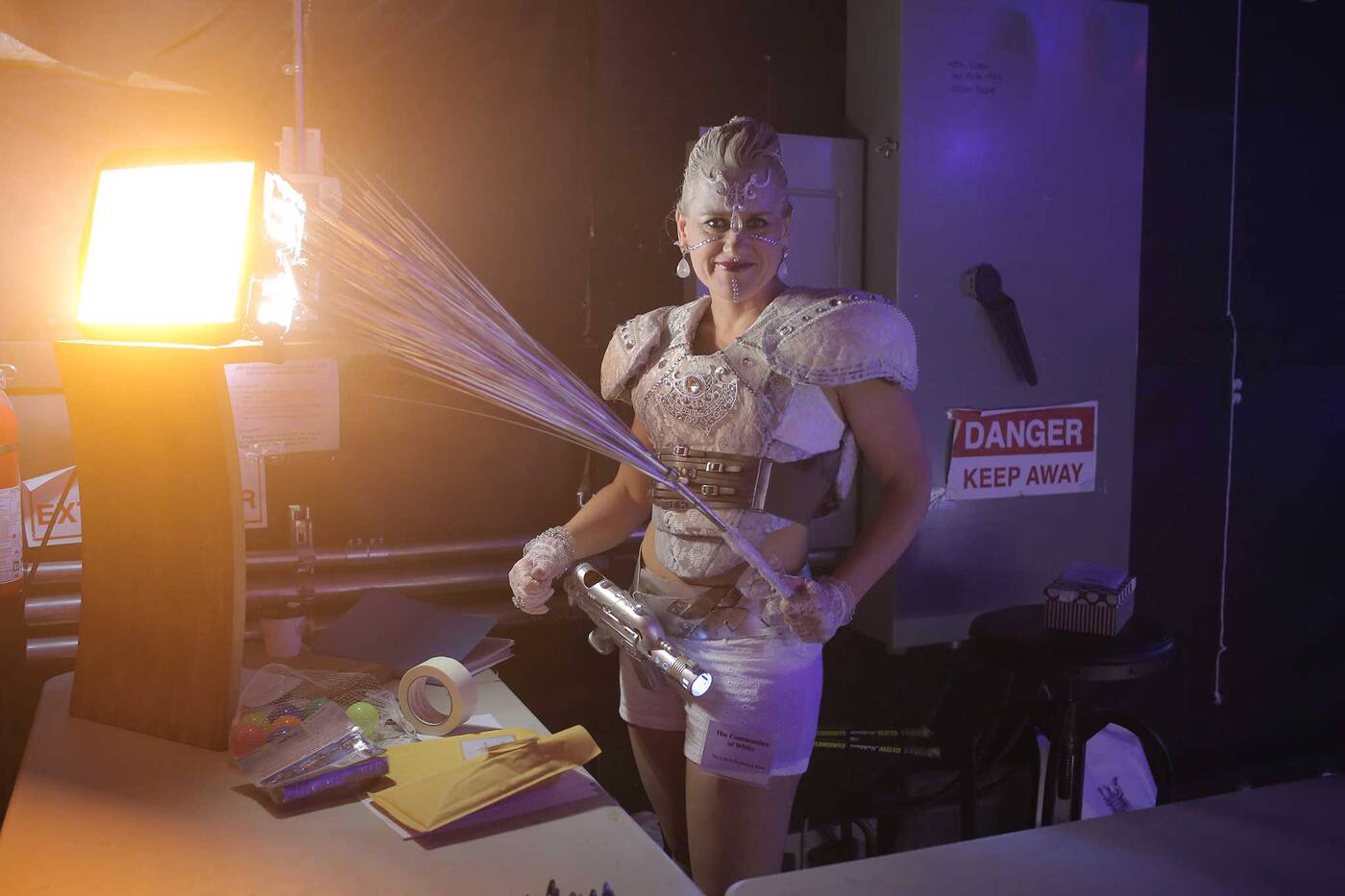 There was a quiet woman in a black sweatshirt with a coffee stain trying not to make eye contact with anyone in case they thought she was playing and tried to kill her (just me).

The organization of Zeenok’s is also a major factor in what makes it such a successful party. Putting it one step above some countries, Zeenok’s has a fully functional economy with Z Bucks. They can be used to gamble or buy small things like invincibility necklaces (though unfortunately the bar only accepts Canadian currency).

By the time I left, I was already fully on board to attend the next Zeenok’s as a character. “It’s fun, it’s social, it’s like being in space”, said Dave, whose costume involved being fully ensconced in various flora.

It was his fourth time attending Zeenok’s and he had explained to me that he had started the night as a light projection of himself but then was able to trap someone in a room in exchange for freeing himself and joined another faction. “It’s just fucking nuts.” 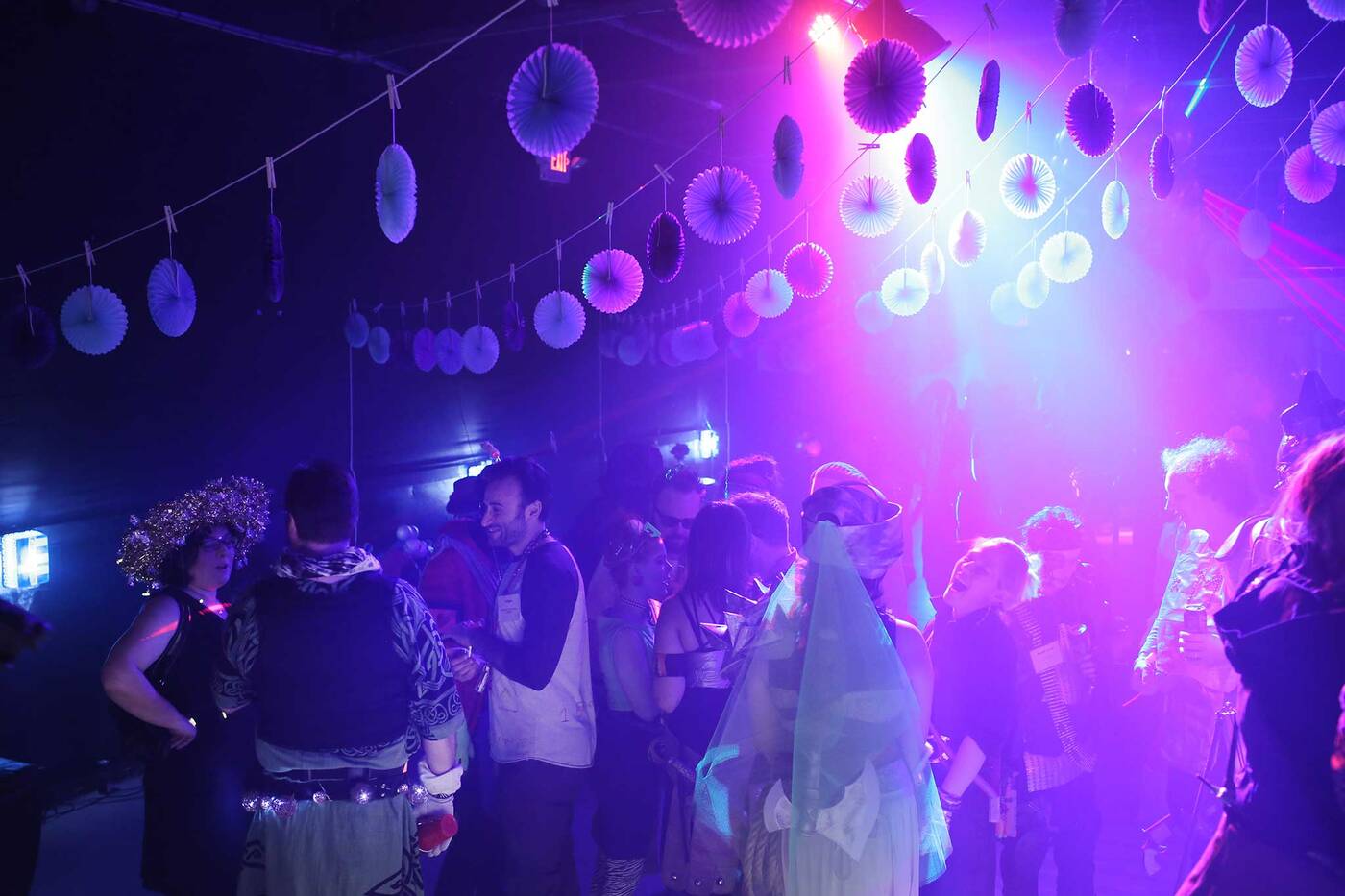