The leaves have fallen ahead of the first snow, which means that the city's big convention spaces will be booked solid till the spring with shows - those lifestyle expositions and trade fairs where vendors of everything from vitamins to yachts will try to appeal to our longings. The basic premise of the consumer trade show is that you are what you buy, and this weekend the Gentlemen's Expo at the Metro Toronto Convention Centre focused on dudes, hosting a hall full of vendors who, taken together, comprise a fascinating and unwieldy picture of modern manliness.

Friday afternoon's media preview was a work in progress - vendors either putting the finishing touches on their booths or scrambling to set them up - but it was clear that the Gent's Expo grouped male appetites into five basic groups - cars, gizmos, clothes, booze and food. NewEgg took charge of the gizmo market with a whole corner of the exhibition space showcasing computer and entertainment gear from Lenovo, LG, NVIDIA, Seagate Belkin and others.

The Guild of Automotive Restorers, a classic car outfit from Bradford, ended up with pride of place at the centre of the show with a quartet of spectacular projects, including George Barris' legendary shaggin' wagon, the Super Van (as seen in the truly awful 1977 film,) alongside a vintage Bugatti, a 1918 Roamer touring car, and that classic '80s car poster pinup - a Lamborghini Countach. 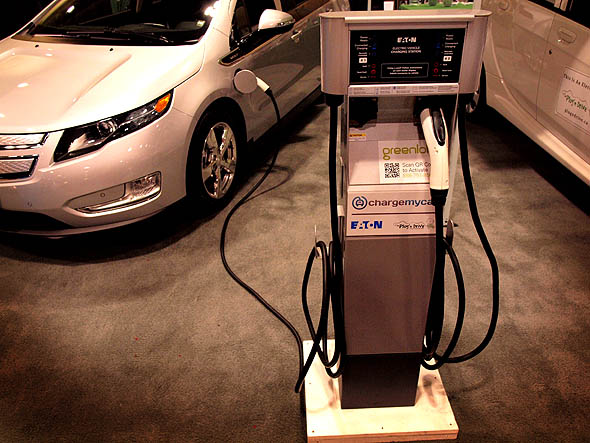 To counter all the testosterone and nostalgia generated by these showpiece cars, there was a Car2Go booth, and a healthy contingent of plug-in vehicles on display, including a Nissan Leaf, a Chevy Volt, and a whole fleet of two-wheeled e-scooters by Amego. This is, of course, all very worthy, but the fact remains that while electric vehicles might have finally fulfilled their niche as city vehicles, it will be a long time before an electric car that isn't a pricey supercar like the Tesla excites the same kind of gentlemanly passion that a dusty muscle car or sporty little British coupe can elicit. 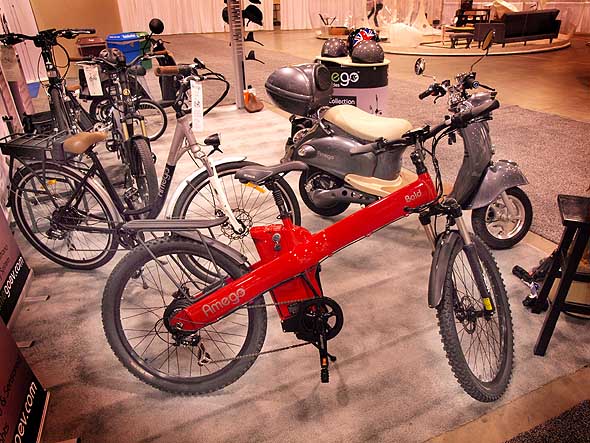 Amego, in particular, probably have a huge task in front of them, even if their booth was full of interesting bits of machinery, at least one of which manages to skirt around the unfortunate "loser factor" inherent in too many cheap e-scooter designs by modeling itself on a classic Vespa. 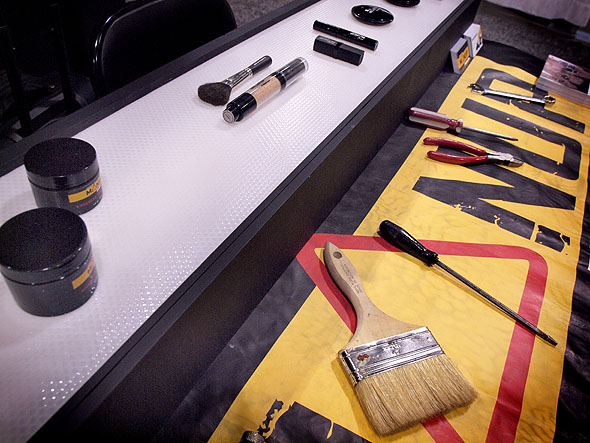 Another vendor at the Gent's Expo that would have an onerous task ahead of it would be ManUp, the male cosmetics company that displayed its wares next to a load of tools, as if trying to suggest that a man would be as likely to reach for moisturizer or concealer as he would a spanner or Robertson red. We might be a long way from that world, and it's a fair bet that ManUp will have its hands full trying to convince crowds at the show otherwise.

The liquor companies represented at the Gent's Expo won't have nearly as difficult a task, and they were found in a dense cluster just near the kitchen stage and the food court. Big brands like Budweiser, Jim Beam and Canadian Club share space with imports like Krombacher and Stella, as well as local microbrews like Lake of Bays, Big Rock and Hogtown. An Eat, Drink and Be Manly passport that comes with admission gives you four samples each of beer, wine and spirits. 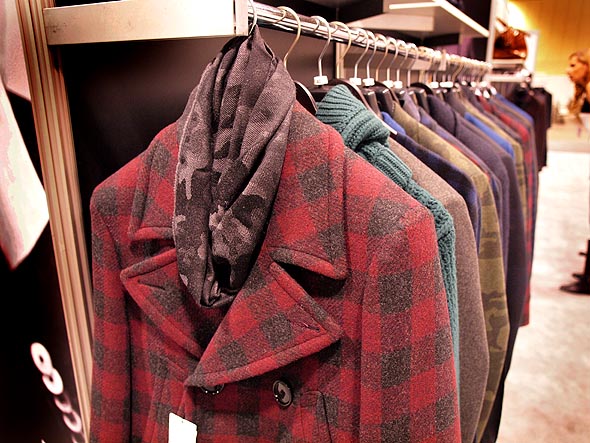 Gent's Expo sponsor GotStyle took the biggest chunk of sartorial exhibitions pace with a showroom featuring brands like Strellson, Tiger of Sweden, Sand and G-Lab, while Cole & Parker offered a more affordable dose of style with their line of colourful socks. Near the front, however, Garrison Bespoke showed off a half dozen tailored garments, including a pinstripe three-piece with conspicuous holes in and around its lapels. 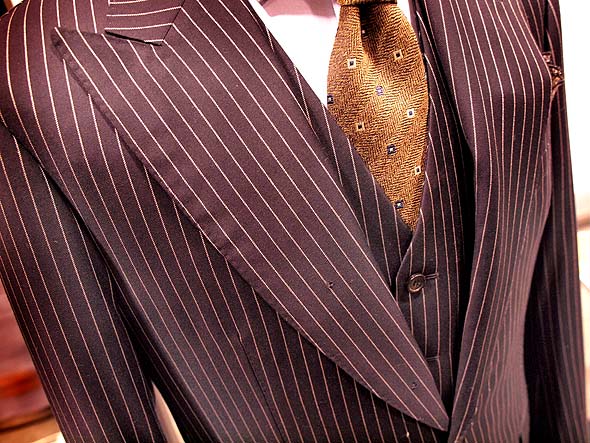 It's a ballistic suit, with lightweight bulletproof panels in the waistcoat that they've tested on shooting ranges, displayed under a video showing its efficiency at stopping rounds. This might be taking manliness a touch out of the average dude's comfort zone. 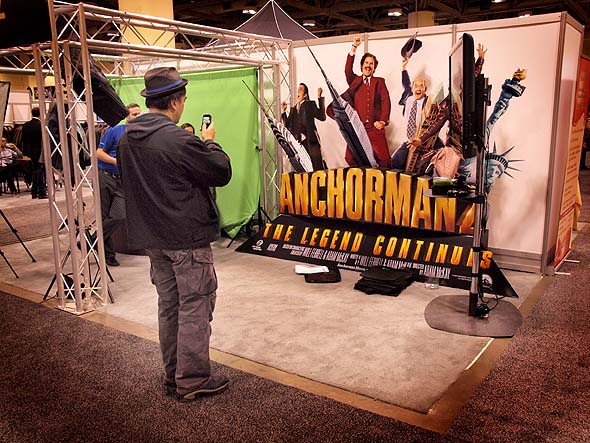 Up front, the new Ron Burgundy film bought a prominent spot, while peppered throughout the space were booths selling e-cigarettes and cigar lighters, banking services, leather furniture reconditioning and career options with Toronto Police Services. If you philanthropic urges were in play, a charity auction for Sick Kids filled tables at a far wall with a huge selection of items that nonetheless managed to fall into a handful of categories: Car stuff, rock memorabilia, smoking accessories, signed sports mementoes, nonfunctional weapons and artwork. 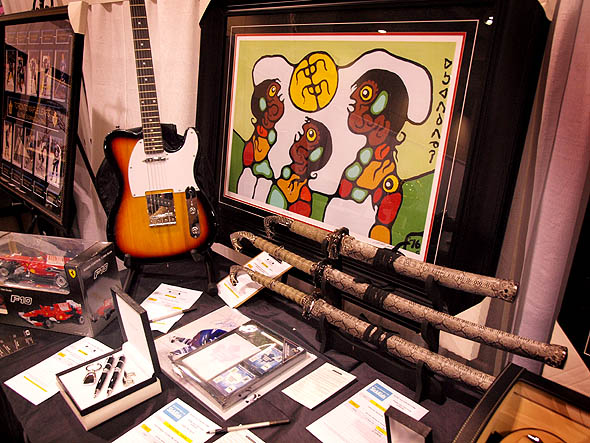 The artwork was particularly notable inasmuch as it suggested that the average dude decorates his wall with either aboriginal art or Group of Seven-inspired landscapes. In Canada at least, the Leroy Neiman age seems to be over. 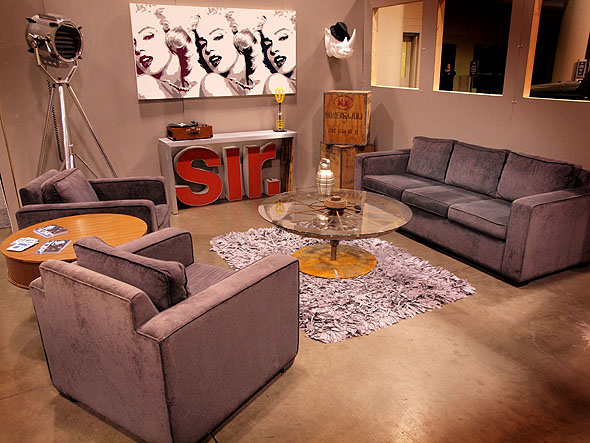 Finally, Type D-Living had a couple of model rooms by the front, full of the kind of decor that seems to be intended for man caves or the single man's investment property. There's a coffee table made of an old wheel and axle patinated with rust, and a rhino's head on the wall - obviously fake, of course, in shiny white synthetic; you wouldn't want people thinking you're some kind of animal, would you? But on the table sits a huge silver hand grenade sculpture, which I imagine as a brash impulse purchase and prop in dozens of post-party Instagrams before it ends up being banished to a box in the attic and discovered again years later by some former dude's offspring.

"Oh, heh. That. I had that before I met your mother. You want to take it to college?"

The Gap is opening a new sustainable athleisure store in Toronto