The X-Men and other heroes of Toronto Cosplay

Cosplay, an abbreviation of "costume play," is when one dresses up as their favourite character from their favourite TV show, video game, comic, or whatever else. These costumes can be either store-bought or made, but many dedicated fans tend to make their outfits themselves. The results may vary in quality, but even the worst costumes look amazing with the right attitude.

Most cosplay is for fun, or to show off the fruits of their labour, but there are some who attach a deeper meaning to their hobby. Particularly, there are cosplayers who engage in costumed heroism, battling inequality with kindness and creativity. This movement -which I'm dubbing Causeplay - is becoming more common, and it's gaining steam in our own borders. So let's take a peak behind the Wonderflex mask and see what the GTA's cosplay community does.

Cosplay For A Cure was founded by a St. Catharines-based cosplay troupe when one of their own was diagnosed with Stage 3 Breast Cancer last year. With ConBravo mere weeks away, and everyone struggling with the crisis, an idea came to the mind of co-founder Casey Brown: a photo booth where people pay to have pictures taken of themselves and where the proceeds go to the Canadian Breast Cancer Fund.

Being a volunteer-run organization, CFAC's staff members have to pay their own way. Getting set up at a convention can be an arduous process, and CFAC has already been turned down by conventions due to issues of space or the inability to gather registry fees in time. However, at the conventions they were operational, they were a hit. Already, the troupe has made appearances at ConBravo, FrostCon, and the Burlington Toy Show, and are expected to appear at Atomic Lollipop this August. 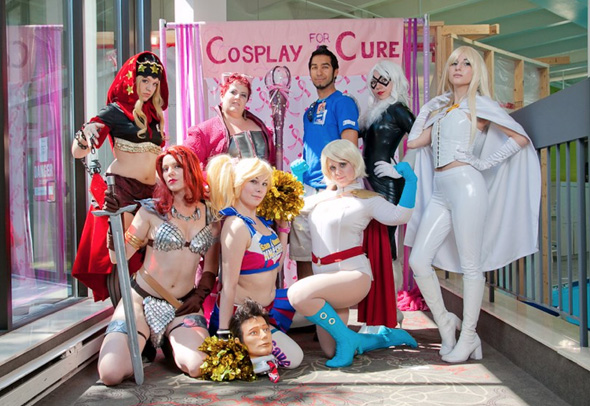 Community reception has been positive, as the group had raised well over two thousand dollars as of this June. In addition to funds, a black backdrop with fetching red curtains was generously donated for use during photo-shoots.

So why do what they do? Beyond the personal connection, CFAC fights because they have to. "We do this to bring the information to younger crowds," Casey Brown explained at Anime North 2013, "Young people think they're pretty healthy, but cancer rates are rising among people in their twenties and thirties. Nobody should have to deal with this, because it affects everyone. So, do not let a doctor say you're too young, because in the end no-one is."

And to those who are fighting, they offered these words of encouragement: "We noticed in our friend that attitude is important. Having a positive attitude can go a long way when it comes to kicking this thing in the ass, and if we can come together and cure one cancer, then we can cure them all."

HOLDING OUT FOR A HERO

Inspired by charity groups like The East Coast Avengers in the US, The Toronto X-Men came together with the vision to create a cosplay-themed charity organization, using superheroes as their base. Though only active for half a year, the Toronto X-Men have hosted two food drives in High Park and Allan Conservatory for The Stop and The Daily Bread Food Bank respectively, and Wolverine dog-tags were raffled off at the Burlington Toy Con, with the proceeds sent to the Canadian Hero Fund.

But, why the X-Men? "We were thinking a lot about superhero teams and we realized that many of them are populated by gods," Toronto X-Men CEO 'Rogue' explained at their Father's Day Drive, "A lot of heroes are as far from the average person as possible. The X-Men are different. They're superheroes, but they're scraping the bottom just like the rest of us. Plus, there's the fact that they do try to accept everyone and anyone, bringing people together into one big family."

This superhero business is taken very seriously. Joining the Toronto X-Men is a formal process, with paperwork to fill out, field tests conducted to see how potential new members work, and regular team meetings held to provide feedback and plan new events.

Most importantly, the biggest requirement for joining these X-Men is not a question of brute force or complete control of your powers, but how good you are with the little people. As said by Rogue: "Our events are very child-friendly, so you have to be good with kids. We have an image to maintain. We're playing kids' heroes. We can't be caught smoking or being a jerk to someone, because that's going to have an impact on them. We have a precedent to set."

The Toronto X-Men were last seen showing their support for Toronto's LGBT community at the Pride Parade. No word yet on whether or not they'll be taking out the Master Mold being built under City Hall.

SERVICE WITH A SMILE

Six years ago, cosplayers Yumi and Jordan had won the award for Best In Show at Anime North a second time. While celebrating their win, they decided it was time to shift gears. Japanese pop culture enthusiast Yumi started following the rise of Maid Cafes across Japan, watering holes for Japanese geeks where patrons are served and entertained by cutesy girls in maid costumes, and began thinking about creating one. 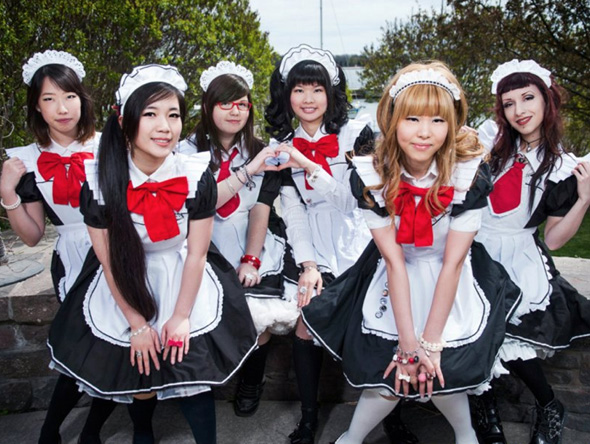 "We'd seen a few pop up across North America but we hadn't seen anything truly authentic to the Akihabara experience," Yumi and Jordan explained in an e-mail interview, "Within the last six years of operation, we have been to Japan four times researching maid cafes and even had the great fortune to meet Hitomi, who is arguably Japan's top meido. And we wanted to do it for a good cause, so we decided to adopt Anime North's charity of choice Sick Kids Hospital."

Thus, Anime North mainstay Cafe Delish was born. Proceeds from seatings go to Sick Kids, but each maid also designs personalized pins to sell, donating their earnings to the Japanese Relief Effort and The World Wildlife Fund. Cafe Delish quickly became popular among anime fans, with tickets selling out faster and people lining up for longer. So far, Cafe Delish collected over $10,000 for Sick Kids, and sent $1000 to the JRE and WWF each.

According to Yumi and Jordan, however, the biggest problem Cafe Delish faces is not the issue of fundraising or seating, but how to explain the premise to newcomers. "Many people thought of French maids when we told them about the maid cafe. We were even asked if our event was an adult event, when in fact it's quite the opposite. The premise of a maid cafĂŠ is to be able to relax, to be treated almost as if you're being welcomed home, to be served delicious food and desserts, play games, and be entertained with song and dance."

This is just the tip of the iceberg. Many Causeplayers and geek fundraisers can be found across Toronto and the GTA. This is the glory of a community, the ability to come together and help out one another in times of need. And who knows what's around the corner? Could a Toronto Doom Patrol emerge to raise money for disabled children's programs? Will the Ontario Science Centre one day get their exhibits funded by a Clone War Re-enactment Society?

Whatever happens, cosplaying or not, Toronto's geek communities are telling the world that we can be heroes for just one day.