Selling the past at the Junction Flea

The Junction got a brand new high style flea market this weekend, when an empty lot on Dundas West hosted a collection of antique dealers, craftspeople, artists and food sellers in an event "curated" by SMASH and neighbourhood antique and curio shop Russet & Empire. There were no used children's toys or grey-market DVD players at this flea - the word "curated" was used in the promo materials, and with good reason; there was an aesthetic at work, in the service of a very contemporary way of looking at the past and the old stuff it has left behind.

On a patch of rubble that was once home to McBride Cycle, a few dozen vendors set up on a sunny Sunday morning to see if the Junction can be home to the sort of upscale flea that's been a hit in New York with the Hell's Kitchen and Brooklyn Fleas. If any single item could sum up what was on offer, it would probably be Pyrexware, that cheerfully-coloured and impeccably practical product of postwar domestic prosperity, which made appearances all over the Junction Flea in everything from the evergreen stacked bowls to food containers and tea service plates. 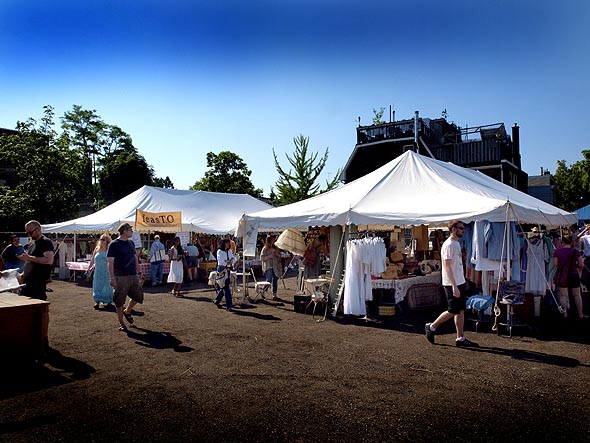 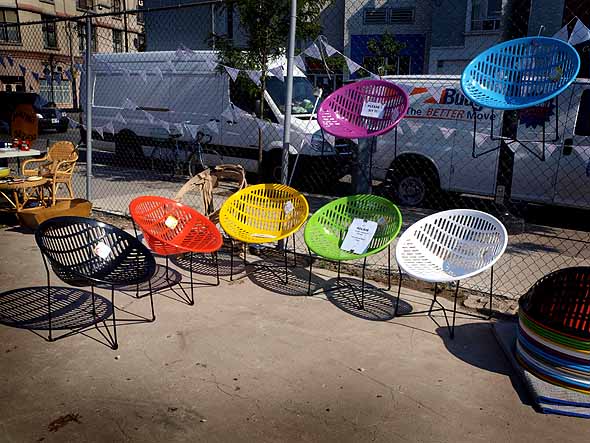 Next to the fence by the entrance, another vendor was selling Solair chairs, those brightly-hued plastic dish chairs known informally as "motel chairs" - another example of the postwar nostalgia that filled the tables. One vendor featured a display of Blue Mountain pottery, another filled a table with skinny ties a la Mad Men, each helpfully packaged with a card giving instructions on how to tie a four-in-hand knot. 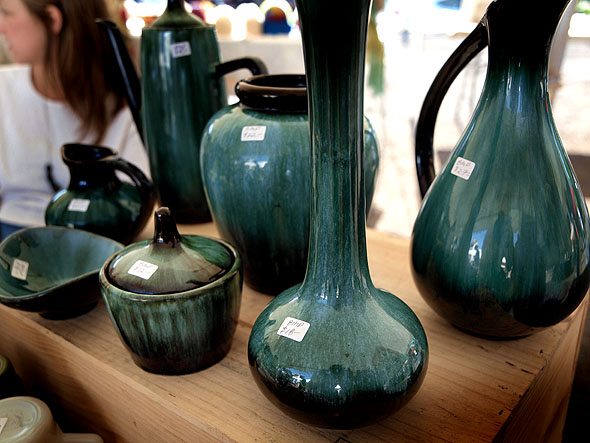 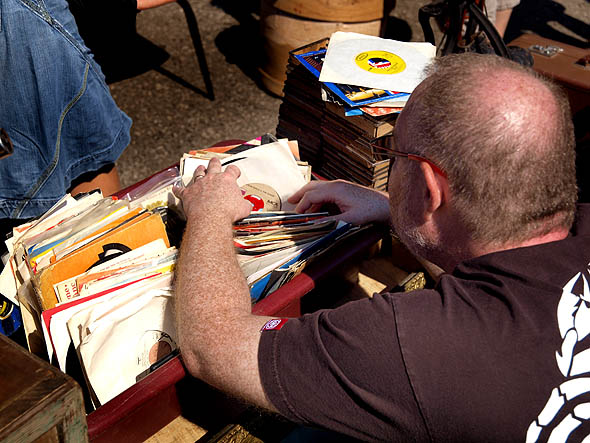 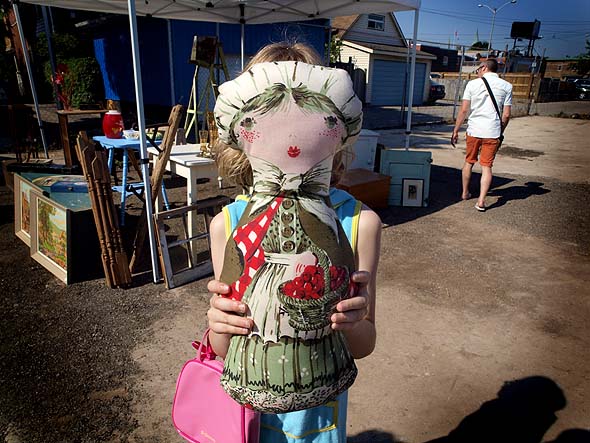 There were booths selling crafts and art as well, including mixed media artworks by Casey Von Esteban, toys and puzzles from designer Jen Bulthuis, and silkscreened textiles from the husband and wife team Bookhou. At one table, there was even a textile artist named Jane Jacobs - the most wholly evocative name you could have at a place like this. The new stuff was of a piece with everything else on show, presented with whimsically retro touches and made from "honest" material - wood, leather and natural fibres.

The food tables were just as well-matched, featuring tidy plates of gyozu dumplings, popovers, handmaid fruit ices and baked goods. At one table by the Red Canoe Airstream trailer that hosted a fortune teller, I met @erindemille and @gringogidget (in some circles, Twitter has utterly supplanted Facebook), who had spent the last two days baking up a table of treats including two-person bundt cakes and cookies with flavours, like pistachio toffee and maple bacon, that sold themselves simply by being read aloud. 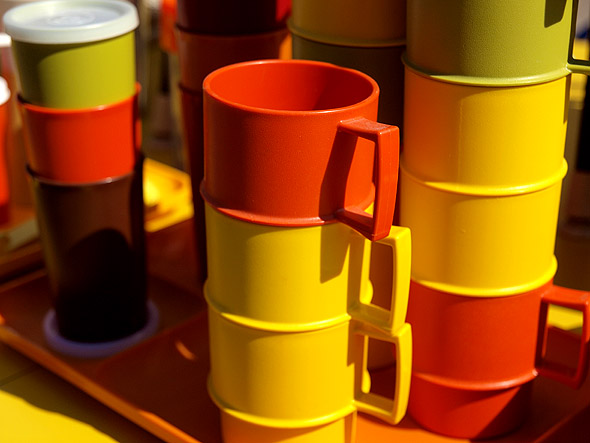 Picking through the antique dealers' tables, though, it was hard not to imagine that so much of what was on offer, from the well-preserved sets of Tupperware patio mugs to bits of teak and a huge orange shag throw, were little totems whose purchase was meant to bring back memories of summer weeks spent with the grandparents of the twentysomething crowd that's revitalizing the Junction.

The high end of the antique market is filled with stunning objects traded on their intrinsic value, while the low end, at places like the Junction Flea, is where people reconnect with memories they'd like to revive or reacquire, where the price tags are connected by an invisible thread to a cottage sold years ago, or a summer before high school, at precisely the last time family was as important as friends or peers. 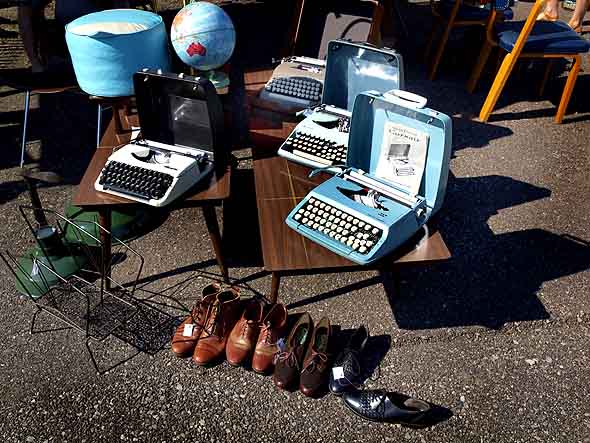 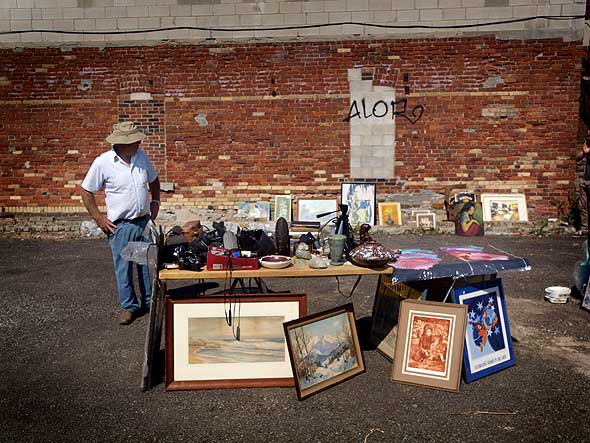 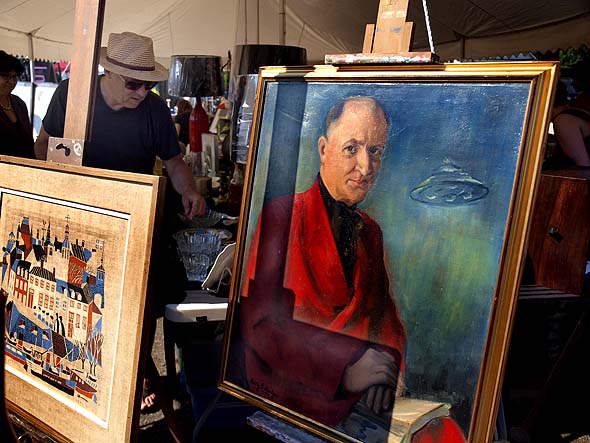 My favorite item, however, was an amateur oil portrait set up front and centre, of a serenely self-satisfied looking man in a red smoking jacket and ascot, in front of a sky streaked with green and featuring two hovering UFOs. The dealer told me he'd bought it in Miami years ago, and that it was of a science fiction writer who once had a cult following, a man who insisted that he'd been an alien abductee. The signature - "Betty Hodges" - had so far turned up nothing but a mystery. He said he'd traded it for an item worth at least five hundred bucks, but he said he'd be willing to sell it for $350. I couldn't help but think that the story of how Miss Hodges' painting had ended up here was far more interesting than any tale of alien abduction.

The Junction Flea is set to be monthly for the summer; the next Flea will be on July 8th.