Friday nights get lively at the ROM

Dinosaurs have never seen such amazing footwear as what was on display last Friday at the ROM. Although I'm sure the cave ladies did their best with what they had, I just don't think they could hold a torch to some of the attendee's choices, which were highlighted by a pair that had steel spikes all along the heel — the perfect weapon for a night that was all about Fashion (with a capital F, yes). 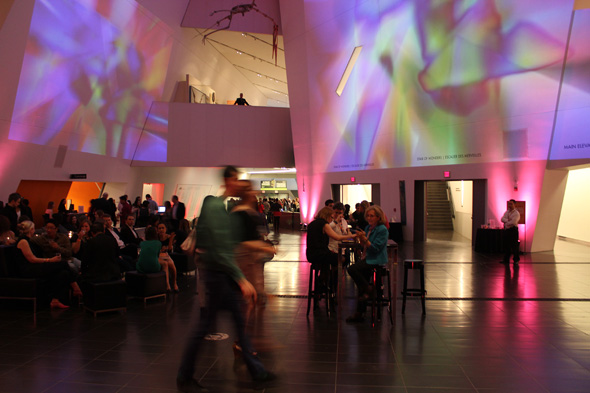 Part of the roughly two-month long Friday Night Live @ROM series, if my experience on this night was any indication, the museum turns out to be a solid nightspot in Toronto. On a first date? There's a lot to look at, a lot to comment on, and the requisite booze to lubricate your flirtation. Don't stay up past 9 p.m. anymore? That's not really a problem either, as these events give you a whiff of a nightclub without having to commit to giving up your Saturday (they wrap at 11 p.m. so you could stay out afterwards). Just make sure you're wearing the right shoes. 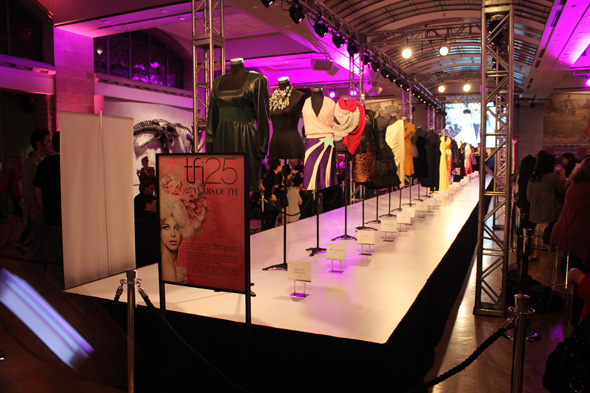 On this particular Friday night, the ROM looked like it had gone to New York on a shopping spree. Curtains hung lavishly, mannequins regally lined up like Madeleine with dresses from the 80s to the present (i.e. my wardrobe). There were a lot of "someones" in this beautiful space — i.e. people who project an air of importance but who you can't actually recognize. And then there were others who I hoped to meet. 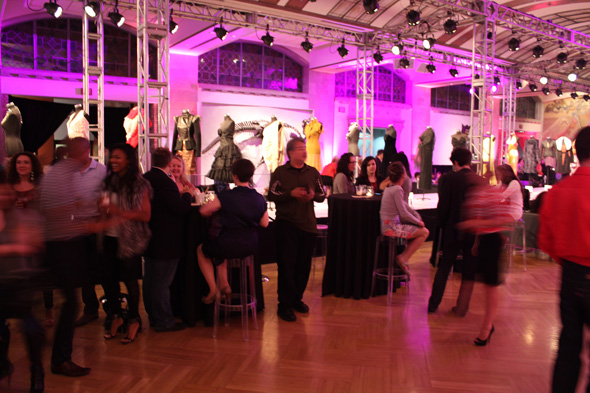 After quite the hunt, I was able to find Eco Luxe designer Mariouche GagnÃ©. I was told to look for a woman with a bone necklace, so I went on a search, creepily staring at people's clavicles. Unsuccessful, I took a break to down a FumÃ© Blanc. As my eyes roamed, my ears opened to such titillating conversation pieces as "Have you seen the waffles?" Yes, there were waffles, and the aroma wafted through the room, along with Jamie Kennedy frites and c5 noodle takeout. 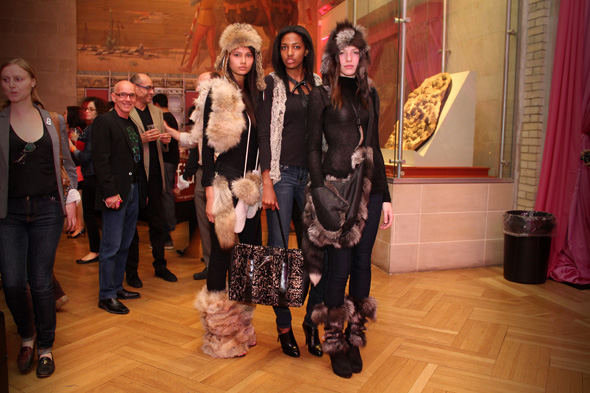 Three ladies that may not have seen the waffles were my ticket to Mariouche. These Amazonian ladies in fur hats and boots looked completely out of place and therefore undeniably chic. I instantly regretted my choice of a lower heel and attempted to make eye contact, but their eyes were too high. Still, they helped me to find the designer of whose work they were decked out in.

Since 1993, Mariouche has been recycling high quality fashion apparel and she has extended the life of fur coats, silk scarves and wedding gowns. She says she often wears wedding gowns and she was initially inspired by polar bears and Inuit legend, having been born in the First Nations village of Loretteville. A lover of snowboarding, she has even incorporated fur into reversible skiwear and won a prize for doing so. She told me her main markets are Japan and Europe, but I see a movement back home starting to brew, especially given the climate these clothes are made for. 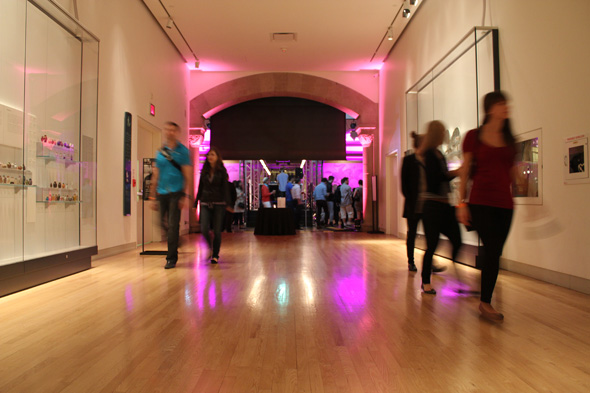 As the night waned, the platform for the models became a platform for people to take photos pretending that they were in the matrix. My date and I sat in front of an old Chinese painting and zoned out like it was a football game. It was time to go. Although many people may have been unaware of the rest of the building - the museum - as opposed to the glitter and glam, it was a lovely evening. I'm sure the dinosaurs did not mind that they were upstaged by waffles and fashion. Next week they can see if they can hold their own against photography. Best of luck. 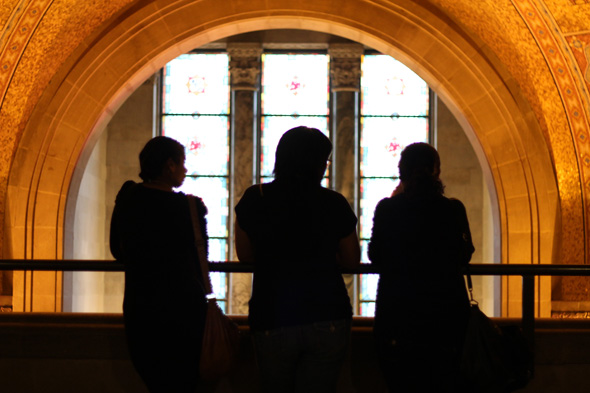 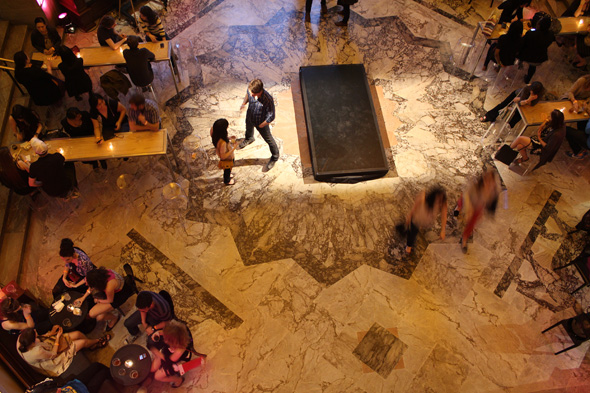 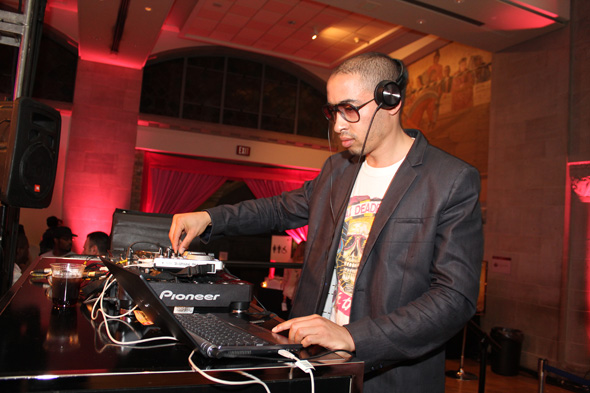 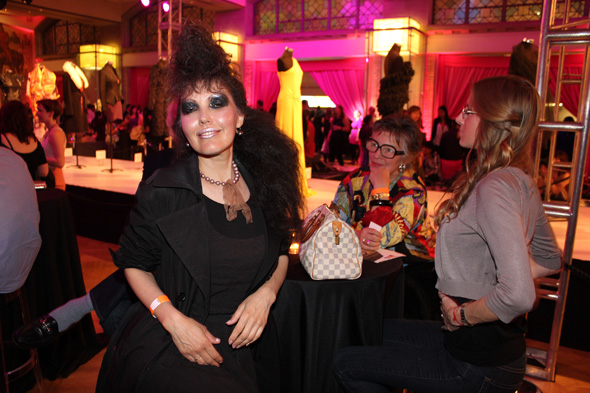 Coming up later this month as part of the series: Photography (May 11), Inside Out Film Festival (May 18) and Toronto live local music (May 25).