When I was 14 years of age, the internet was bright, shiny and new. I remember creating a fan website for the WB series Roswell, which was my foray into the world of online journalism. It was a Geocities website, and unlike today -- with the importance of Google ad revenue -- my love was free.

A similar comparison can be made to Tavi Gevinson, a 14 year old Style Rookie who spoke at Moses Znaimer's ideaCity last week. For those who may not know, ideaCity is a conference held annually that brings together bright minds and young talent - essentially, it's a collection of inspirational discussions, in addition to a geek love-in, with catered eats and a bevy of "social media experts." There, I said it. 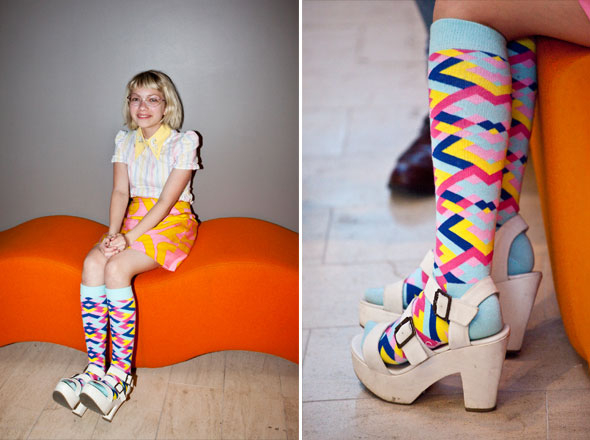 Is Tavi a social media expert? No, not really. Is she a fashion expert? Not quite, but I doubt she would claim to be. Her method is not to play up her age, her awkward yet humbling speaking voice, or even the fact that she is wearing Miu Miu, a brand that is coveted by girls and women around the world. She writes about fashion because she's interested and it just so happens, so are her 1.5 million monthly unique visitors to her blog. Despite the endless criticism she receives for being young in what "should" be an "adult" industry, Tavi ignores the nay-sayers and real world trolls who attempt to criticize what she says is "just joining the conversation."

Moses Znaimer brazenly asked the sprite-like Tavi, "who are these people you hang out with?" A natural question for a media mogul and a man who is successful because of the question "who do you know?" Tavi could not have been more reluctant, but can you blame her? Tavi is unlike the average celebrity-consumed ne'er-do-well, and as such, was not interested in broadcasting her seemingly important friends. She graciously forfeited the opportunity to name drop, which was the exact moment I decided she was the real deal.

I spoke to Tavi about authenticity, elitism, thrifting and the foolhardy debate of editor vs blogger:

You're often criticized as being a novelty of the fashion industry, given your age. How do you respond your critics?

I don't. I am not willing to step outside of myself to consider myself a novelty. Sometimes, without reading, there is the impression that I am a rich, Upper East Side, Gossip Girl type, but I always wonder, did you even read my blog? Because... if you did... That sounds snobby, but whatever.

Not at all. A lot of people will make assumptions about others, especially if they are younger and garnering some level of success greater than their own. Do you ever pander to your followers? Are there ever moments where you write specifically for your audience instead of yourself?

The reason why people come to my blog is because I try to do what I want. Blogging is democratic, so people can, like, choose to read what they want. Everyone wants their writing to be read. 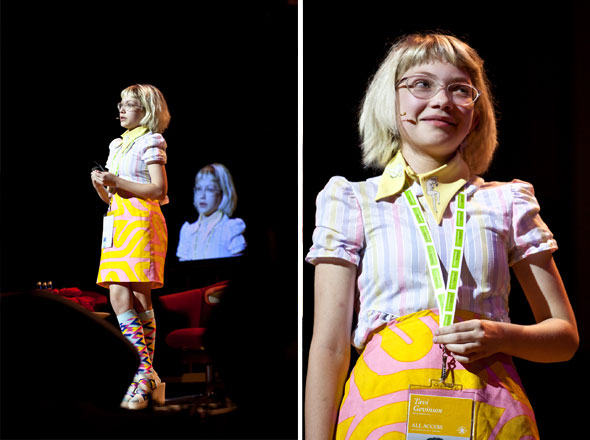 Is there ever a moment where you feel there is too much information being dispensed? Bloggers are endlessly criticized for their impact on the journalism industry - where do you stand?

There is never too much information. I don't like elitism, so I believe that people should read and write whatever they want. Like, people are not going to stop reading Vogue because I am writing a blog.

Right. The arguments are always so completely unfounded. So-called blogger captured market statistics are untested, unproven. Age can't really be a factor either, since you are freely sharing your opinion on fashion, not advocating the demise of print journalism.

Yeah, it's like, I love magazines. I spend all my money on more magazines. I don't think that my views are going to take away from their success.

It all seems to relate to fear...

I agree. Paranoia, fear, and ego.

A conversation can't destroy the industry.

Especially considering that your site includes inspirations which are regularly derived from editorials you have seen. The same magazines that fear extinction. 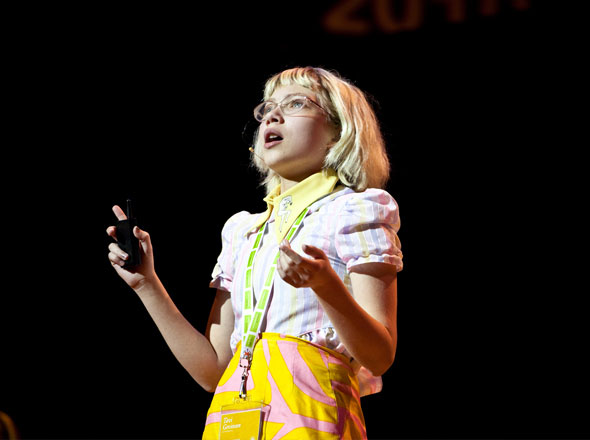 I don't want to bombard you with blogging questions, so lets change it up. Before you were mixing designer (Rodarte, Miu Miu) with thrifted finds, I remember your outfits were predominantly vintage. Are you a hunter, or do you go in and out of stores, with a specific piece in mind each time you go shopping?

I like both, but I am more interested in digging through piles of clothes. There is more of a challenge to looking through. When you hunt, you find the cooler clothes.

Much like Tavi hunts for the ideal find, she too was spotted amongst a growing population of bloggers. Her hook may be that she was only 13 years old, but she continues to succeed as a voice of a younger generation of eloquent speakers.

At ideaCity, Tavi had her fan girl moment for 90s publication Sassy Magazine, a glossy that was lauded as the anti-teen girl mag. Her speech seemed more pitchy than informative, as she was discussing her interest in creating a new Sassy.

Tavi believes it will be a publication that addresses politics in the form of Third Wave feminism, with emphasis on indie music and fashion for the sake of fashion. It is tough to say whether there is room for her vision of a magazine for womyn, but that has more to do with the current state of print media then her ability to pitch a magazine concept.

In the mean time, Tavi says, "I want to do everything. I want to do so many things" when I asked her if the blog could be a catalyst for bigger and better opportunities. Sassy seems to be the one big thing on her mind, which is a project she says "is really important" because "[she] always starts things and then forgets about them. [She] can't stop thinking about this and wants to make something happen."

You may be on the fence about a young girl who is sharing her unfiltered critique of fashion and culture, but pick your battles wisely. If you care more about her age, she won't listen. She sees nothing novel in something she finds so captivating, so your concerns will fall on deaf ears. However, if you would like to join a growing global discussion, the internet is ready for you and so is Tavi.

New student? Here are some Toronto-based bloggers to keep it homegrown:

I Want I Got